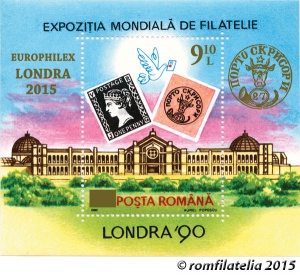 To celebrate one of the landmark events of the philatelic field, Romfilatelia introduces into circulation the philatelic issue London 2015 EUROPHILEX Stamp Exhibition. This issue is an overprint that brings back into the publics attention the World Philatelic Exhibition London 90, and the souvenir sheet issued on that occasion.

The Stamp World London 90, one of the greatest of all philatelic exhibitions of the time, was dedicated to the 150th anniversary of the first stamp in the world, known under the name of Penny Black.

The current EUROPHILEX 2015, celebrates 175 years since the same event.

A bit of paper just large enough to bear the stamp, and covered at the back with a glutinous wash. – Rowland Hill

This was the first mention of what became the worlds first adhesive postage stamp, Penny Black and belonged to Rowland Hill.

The stamp was a great British invention that revolutionised communications and changed the lives of people around the world. It is hard to imagine the world before 1840 when communication was so expensive as to be limited to a small section of the society. In an age when communication is more important than ever, this invention deserves to be celebrated.

It is not the first time since 1990 when the Penny Black is joined in exhibition by the Bulls Head, 27 parale stamp. Among the philatelic pieces presented during the EFIRO 2008 Exhibition in Romania were the original die of the first Romanian Bulls Head stamps (the Iasi issued newspaper The Auroch and the Eagle on which were placed eight Bulls Head stamps), the Penny Black and stamps from the personal collection of Queen Elisabeth II of Great Britain.

EUROPHILEX 2015 is a landmark event in the international philatelic calendar.

2015 is the first year since 1934 when a major international philatelic exhibition is held in London outside the ten-year cycle established in 1940. This is also the first exhibition in London that will take place under the patronage of FEPA, the Federation of European Philatelic Associations.

FEPA confirmed their patronage for the event at its annual Congress in Paris, France, on June 10th, 2012.

Coincidentally, LONDON 2015 EUROPHILEX will also be the fifteenth international exhibition to be held in London.

The souvenir sheet portrays in the background the image of the Alexandra Palace in London, the location of the London 90 exhibition, a historic place. The building, originally named The Palace of the People was renamed to commemorate the popular Princess of Wales, Alexandra of Denmark, who had married Prince Edward on 10 March 1863.

Likewise represented are the first stamp in the world, the famous Penny Black and the first Romanian stamp, the Bulls Head, 27 parale.

The overprint elements illustrate in gold foiling the Bulls Head, 27 parale, the new event celebrated, EUROPHILEX 2015, its location, London, as well as the new face value of the stamp of lei 9.10. 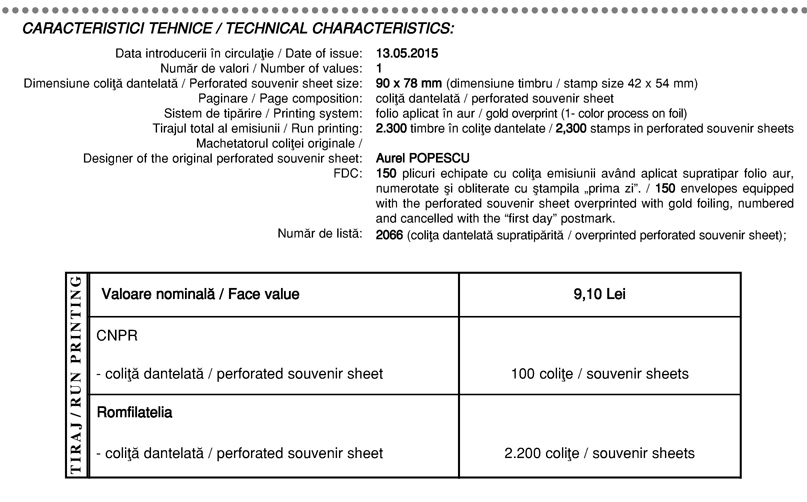