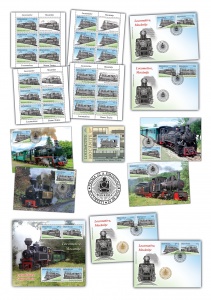 For technology and tradition enthusiasts, Romfilatelia introduces intro circulation the postage stamp issue Locomotives, Steam Trains. The postage stamps of the issue illustrate some of the representative Mocanita steam trains of Romania. Famous, both in the country and abroad, the Mocanita steam train is a narrow-gauge train, driven by a steam locomotive. It runs in the mountain regions, in the past ensuring the transport of goods and, in particular, of timber. The name of this picturesque means of transport is due to the Mocani, as the local people from the Apuseni Mountains are called. The narrow railway crossing this area was established between 1910-1912.

Mocanita steam trains, a tourist attraction with a special charm, has been preserved over time, so that, today it became an appreciated tourist destination, a means of transport offering the tourist the opportunity to admire peculiar landscapes, in a unique way.

Brad-Criscior Mocanita steam train, inaugurated in 1907, is reproduced on the stamp with the face value of Lei 1.60. The purpose of the steam train was to ensure the transport of coal, an activity carried out over 90 years, until 1998. Since 2001, the railway line has been exploited for tourist purposes. The 7 kilometers between Brad and Criscior can be covered in about half an hour.  Mocanita steam train runs every year before Christmas, East and „Brad Days”.

Moldovita Mocanita steam train is illustrated on the stamps with the face value of Lei 7. Named by the locals Hutulca, it represents an ideal opportunity for tourists to admire the beautiful natural landscapes of this part of Bucovina. The narrow-gauge railway from Moldovita was built by a sawmill owner in Munich, Louis Ortieb. It was put into service in 1888, for the transport of timber, from the forest to the sawmill. Hutulca from Moldovita runs today on a route of 12 km.

The stamp with the face value of Lei 8.50 illustrates Sovata Mocanita steam train. This is part of the group of ten locomotives built in 1949, at Chrzanowo factory in Poland, two of which arrived in Romania. They were preserved until 2011, in Sibiu shed. The train set has three coaches, two closed-topped and one gondola type. A gondola type coach was built in 1953, and the other two in 1985 and 1991. Sovata Mocanita steam train has a route of 14 km, and the round trip lasts about two hours.

Vaser Valley Mocanita steam train, represented on the stamp with the face value of Lei 12, has one of the longest routes in Romania, traveling about 21.6 km. This is one of the last built in the country, being inaugurated in 1933, almost 30 years after the first Mocanita steam train in use in Romania. It runs through the picturesque Valley of the Vaser river, from Viseu de Sus to Paltin, near the Ukrainian border. The route through the mountains is slow, with regular stops for water refilling. It is worth mentioning that, since 2007, Vaser Valley is part of Maramures Mountains Natural Park, offering the visitors unforgettable trips to spectacular places.

The perforated souvenir sheet of the issue, with the face value of Lei 19, showcases Sovata-Comandau Mocanita steam train. Initially used for the transport of logs from the woods, it was inaugurated in 1890. It makes a detour of Covasna and Comandau villages, being among the resort’s attractions. The railway line was repaired and inaugurated since 2007. Between the two villages there was a unique separate technical unit in Europe and very ingenious, which used the gravitational force to transport the logs.

The new issue will be available on Friday, August 24th, 2018, in Romfilatelia’ own shops network in Bucharest, Bacau, Brașov, Cluj-Napoca, Iași and Timișoara and online on https://romfilatelia.ro/store/. The postage stamp issue is completed by a set of two First Day Covers and a set of 4 maxicards, as page composition there were used a sheet of 32 stamps (the 5th row with tête-bêche), a minisheet of 5 stamps + 1 label, a block of 4 stamps and a perforated souvenir sheet

The philatelic album is created into a limited edition of 249 pieces and is equipped with the block of 4 postage stamps of the issue numbered from 001 to 249 and the set of two First Day Covers with “first day” postmark cleary imprinted with foiling, numbered from 226 to 474. 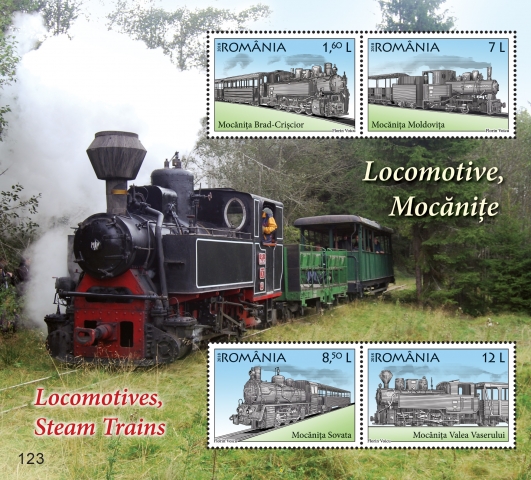 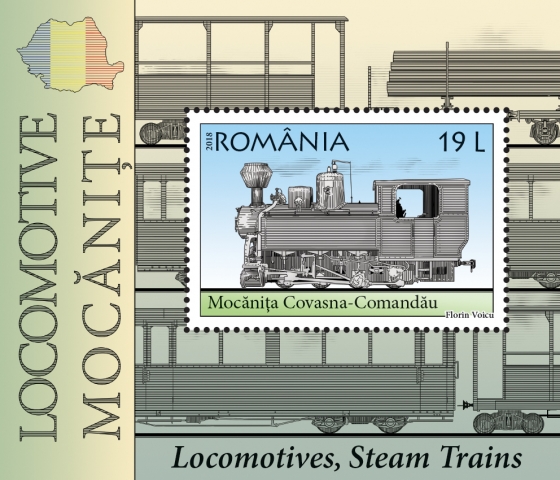 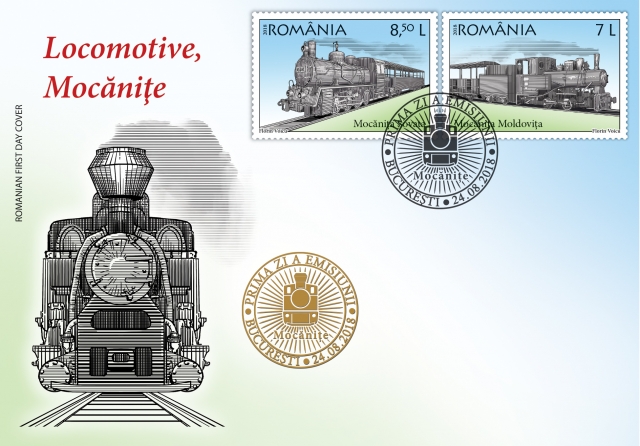 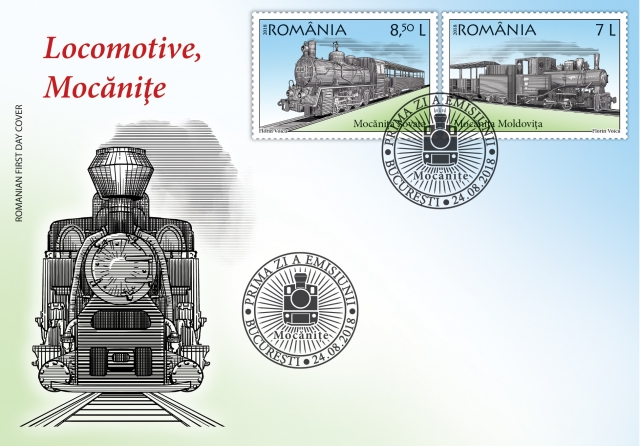 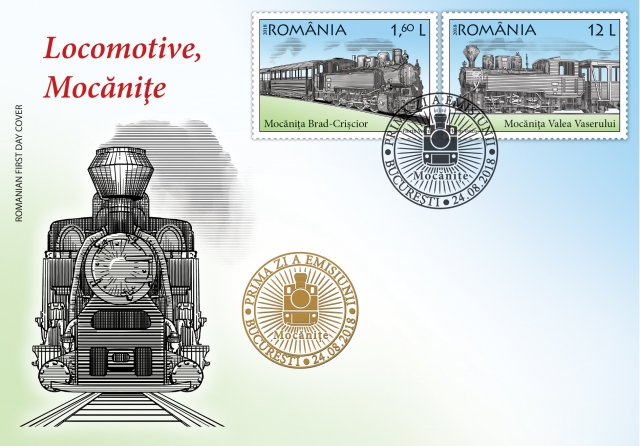 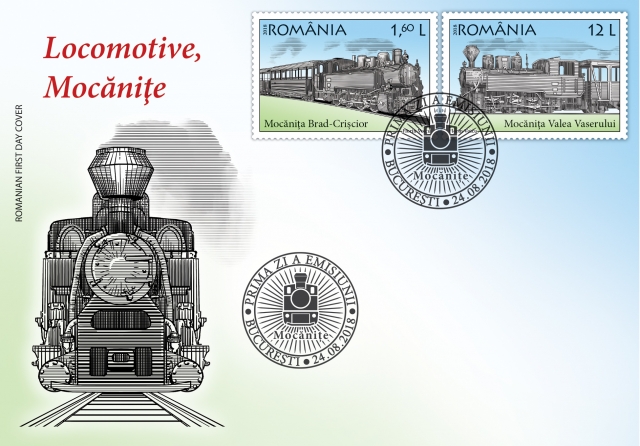 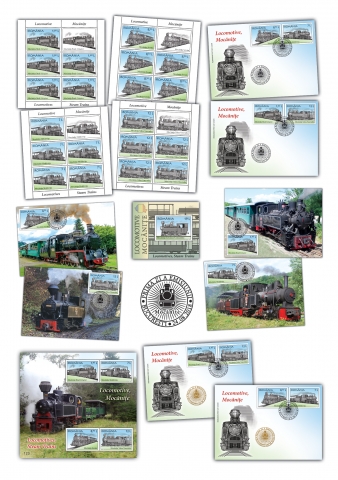 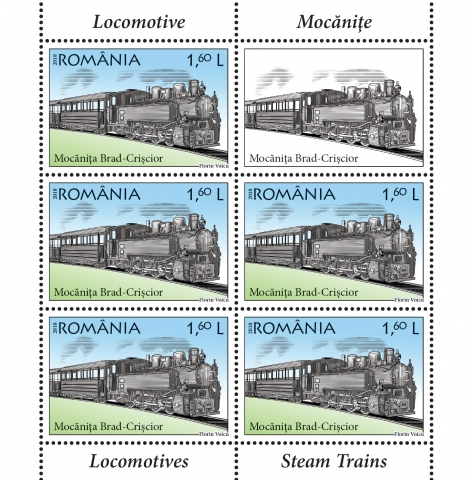 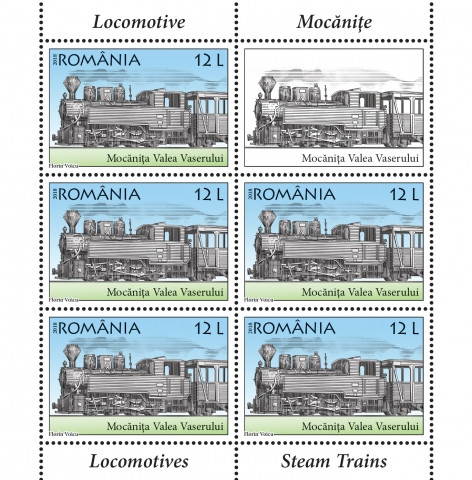 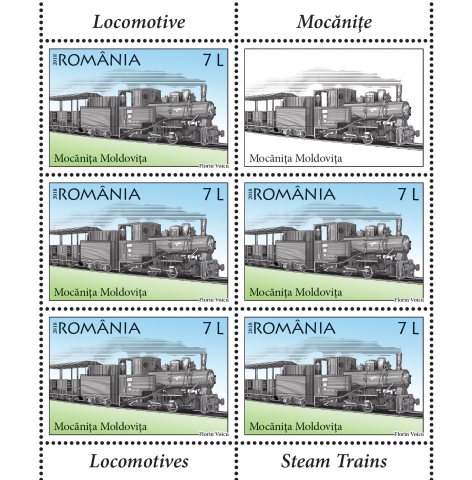 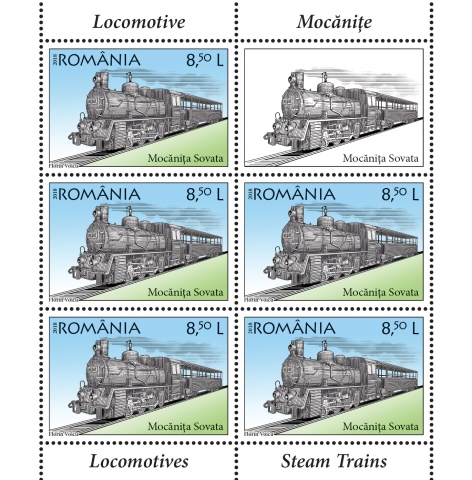