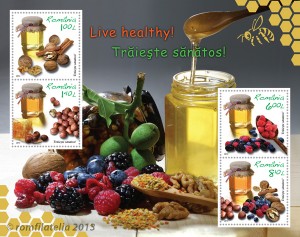 Romfilatelia introduces into circulation the postage stamps issue Live healthy!, thus adding a new set of stamps to the topic initiated in 2012, which suggestively illustrates the natural resources that should lie at the basis of a healthy nutrition, such as: honey, walnuts, peanuts, wild berries (raspberries, blueberries and blackberries) and cinnamon.

A first rank food, both drink and nourishment, honey is first of all, a symbol of richness, abundance and especially sweetness. The holy books from the Orient and the Occident frequently associate the promised lands to lands where endless rivers of milk and honey flow, as the “Canaan Country” is presented in the Holy Scriptures.

It is undoubtedly known, in the Greek tradition, that Pythagoras ate honey his entire life, from which he received the gift of knowledge.

The Greek religion mentions the presence of honey as symbol of life and death, of torpor and keen sight.

The bee wax lights up the light of belief in all Christian churches and watches over the deed sleep of the fellows who passed away.

Adding to the aspects mentioned above the opinions of the wisest scholars of Antiquity, we remember the words of Saint Clement from Alexandria: “The bee goes over the flowers of the entire field to give just one kind of honey”.

Albert Einstein summarizes in a single phrase the bees’ role in the existence of mankind: “If bees were to disappear, mankind would live no more than four years”.

The honey is the result of a complex transformation process of pollen (raw material) by bees into a product with exceptional nutritional qualities, being the strongest and fastest natural energizer ever known. The substances contained by it are easily assimilated by the human body that receives minerals, vitamins and enzymes from the honey.

The nutritional qualities of honey are complemented by special therapeutic actions among which antimicrobial, soothing, detoxifying or expectorating ones.

Just like honey, wild berries such as raspberries, blueberries and blackberries, have special nutritional and therapeutic properties. Besides their pleasant and flavoured taste, they contain antioxidants and vitamins that stimulate the immunity system and prevent infections.

When consumed fresh, wild berries have a reinvigorating effect and their special flavours make them more than suitable for the preparation of marmalades, cakes, syrups and sweets.

Walnuts and peanuts are fruits appreciated mainly for their exceptional nutritional qualities, as they have very high energetic values and their components are easily absorbed by the human body.

Consumed as such, both walnuts and peanuts represent a nutritional dessert, having a significant content of minerals and vitamins. However, most of the time, they are prepared in sweets recipes and eaten as such.

Cinnamon is a refined spice, with a flavoured and sweet taste and an unmistakable smell. Known and appreciated from immemorial times, cinnamon was considered a refined product, its value being compared to that of gold. Today, it is still high appreciated and included both in the list of special flavoured spices used in food recipes and in the list of medicines and products highly efficient in diets and cosmetic treatments.

Important presences in a healthy nutrition, the natural products illustrated in the images of the postage stamps add extraordinary therapeutic properties to their nutritional qualities, which are known and beneficially used in the traditional medicine. Thus, we may summarize the message of the ideas presented above in the words: Live healthy! 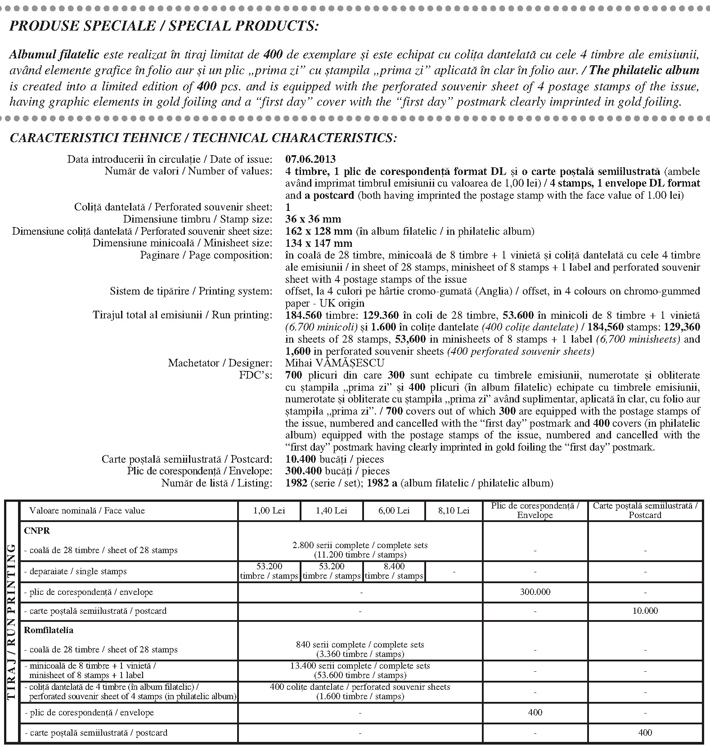