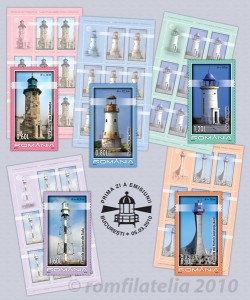 Its story goes down in Pharos Island, in the 3rd century B.C. Egypt. The dangerous shore of Alexandria made people think of a construction that might show the safest way to the harbour. Thus, the architect Sostratus of Cnidus built and “offered this work to the Navigating Gods and the people journeying on seas”.

130 m high, the Lighthouse of Alexandria was for a long time the highest building made by humans and Antipater of Sidon considered it one of the Seven Wonders of the Ancient World.

The development of the trade exchanges made Phoenicians and Romans build numerous lighthouses along the Mediterranean Sea, the Black Sea and the Atlantic Ocean.

The light of the lighthouses was initially obtained by wood fires, coal fires, resin torches and later by suet, vegetal or fish oil lamps. When the fog did not allow sailors to see the lighthouse, the ships were warned by bell tolls or cannon blows.

Nowadays, the lighthouses have radio emitters and radar signal reflection systems of ships. Modern navigation has reduced the importance of lighthouses but not their beauty.

Romfilatelia introduces into circulation the postage stamps issue LIGHTHOUSES FROM ROMANIA, illustrating only some of the most beautiful lighthouses on the Romanian seaside, picturesque and romantic historical vestiges, genuine architectonic masterpieces.

The Genoese Lighthouse from Constanta, illustrated on the stamp with the face value of RON 0.60, is on the town’s peninsular promontory. Having Artin Aslan as an architect, it was built in 1860 by an English company (the same one that built Constanta-Cernavoda railway and Constanta harbour). The lighthouse (whose height from the ground is of 14 m), had the light at 21 m above the water level and its visibility was of 9.5 nautical miles. Its name derives from the supposition that it was built on the place where there might have existed a lighthouse erected by the Genoese in the 14th century.

The Old Lighthouse from Sulina is illustrated on the postage stamp with the face value of RON 0.80. Built in 1856, it is the first Romanian lighthouse. In 1911 it was optically modernized and in 1946 it got electrified. It is placed in the Eastern part of Sulina having the shape of a white masonry tower with a green dome 17.5 m high from the ground and a light visibility of 12 nautical miles.

The Lighthouse from Mangalia is illustrated on the postage stamp with the face value of RON 1.20.

It was built on the harbour beach, in the North-Eastern part and was put into service in 1898. 10 meters high, it looks like a round masonry tower having nowadays a blue dome. Subsequent extension and modernization of the piers led to its closing down.

The Landing Lighthouse from Tuzla is illustrated on the postage stamp with the face value of RON 1.60. 43.9 m high, the lighthouse tower is a metallic cylinder with white and black horizontal stripes covered with a round white dome.

Taking into account the danger represented by the cliffs, the light may be seen on the sea in a guided sector and the lighthouse is equipped with a nautophone (acoustic signal). Due to the serious erosion of the shore, the construction might be in jeopardy along time.

The White Lighthouse from Constanta-North Harbour is illustrated on the postage stamp with the face value of RON 8.10. It is located on the breakwater at Km. 2 + 554. It is a granite tower with a white dome, it is 18 m high and has a visibility of 10 nautical miles. It has been operated since 1972 and is also provided with a nautophone.

We kindly thank to the Museum of Romanian Navy, “Sulina Lighthouse” Museum and to the Administration of Constanta Harbour for their support in the accomplishment of this postage stamps issue. 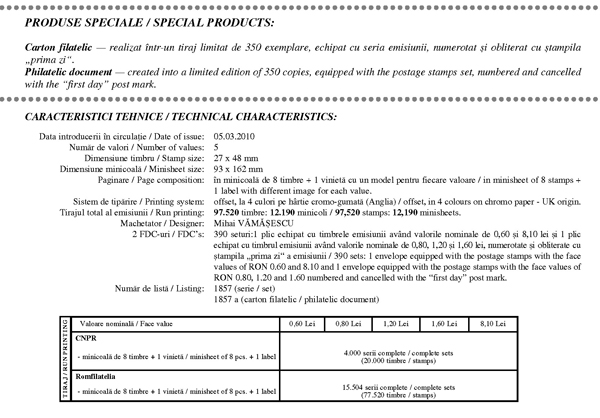