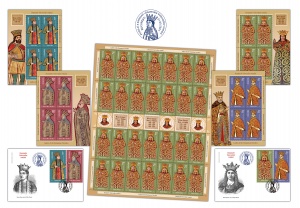 In the history of the Romanians, as in general in the history of Europe, to rule – to govern the people from the position of a throne – was a male prerogative. Therefore, our history has retained especially the voivodes who, over the centuries, have reigned on the thrones of the Romanian principalities. But alongside them, often in their shadow, lived the ladies of these voivodes, wives who, though less known than them, both to contemporaries and posterity, had their significance in the lives of these rulers and sometimes in the life of the country.

Romfilatelia brings back to memory the figures of four of these ladies through the postage stamps issue The Ladies of the Romanian Voivodes, which will be put into circulation on Friday, May 21st, 2021.

The stamp with the face value of Lei 2 shows the figure of Lady Mara, the wife of Mircea the Elder. Her face was preserved in the votive painting from Bradet Skete, in Arges County.

This lady of Wallachia is a mysterious figure. Neither the year of her birth nor the year of her death is known precisely, not even her family. She is traditionally called Mara, but her name has been reconstructed from an incomplete inscription, and some historians claim that her name could just as well have been Ana or Klara. According to a current hypothesis, her name was Maria Tolmay, she owned a property near Lake Balaton, in the current territory of Hungary, and she would have been the mother of Mihail, the only legitimate son of Mircea the Elder, who associated this son to reign, and later he ruled alone, after the death of Mircea, from 1418 to 1420.

On the stamp with the face value of Lei 2.20 is represented Lady Chiajna, wife of Mircea the Shepherd, thrice ruler of Wallachia (1545–1552, 1553–1554, 1558–1559). Her image is preserved in the votive painting in the Church of Curtea Veche (also called Church of Saint Anton in Curtea Veche), the oldest church in Bucharest.

In the troubled history of the Romanian Middle Ages, the second half of the 16th century was one of the most turbulent eras. The frequent changes of the rulers, burdensome imposts, plots, betrayals, executions, impoverishment of the population, all made this period “one of the dark ages of history of Wallachia”, as the historian Constantin C. Giurescu, author of the monumental work History of the Romanians, calls it. Lady Chiajna, living in these dark times, appears herself as a dark figure. Historians and writers have built a reputation as a tough, domineering woman, greedy for high status. How deserved this reputation is, it’s hard to say now, after almost five centuries.

At the death of Mircea the Shepherd, his son Peter the Younger was only 12 years old. The true ruler of Wallachia became Chiajna, who succeeded in keeping her son on the throne for almost nine years (1559-1598). For this, she resorted to military confrontations with the enemies of the reign, to the purchase of political support from Constantinople with fabulous sums, collected by increasing imposts, and to alliances with influential people, to whom she married her daughters. One of them was sent by her mother to the very harem of Murad, the future sultan.

In 1568, Peter the Younger fell into disfavour with the High Porte and was exiled with his mother. He died the following year; Chiajna, however, survived him for almost 20 years, dying in 1588, after a time when, driven by her domineering nature, she had supported several other pretenders to the thrones of Wallachia and Moldavia, also through intrigues, plots and battles.

On the stamp with the face value of Lei 5.50 is represented Lady Elina, the wife of Matei Basarab, a prince who ruled Wallachia for over two decades (1632-1654).

Constantin C. Giurescu states that she was “one of the most important women of our nation”. Elina Nasturel Herescu came from a family of cultured people; her brother was the scholar Udriste Nasturel. Elina also received a fine upbringing: she read a lot, was interested in history and art, and knew Latin, Greek and Church Slavic.

She supported the development of the printing press, built churches, managed the princely residence, but, when needed, she knew how to cope with the difficult occupation of leading the country: “A bold woman, she took care of the country, in 1633, when her husband, who had taken his seat with weapons, went to Constantinople to get his support”, writes Nicolae Iorga, in the History of the Romanians in Faces and Icons.

Her image appears in a book published during the reign of Matei Basarab (a Liturgical Book written in Wallachia by the grammarian Radu, 1653–1654), a testimony to the development of culture, to which Lady Elina also contributed.

On the stamp with the face value of Lei 19,50 appears Lady Maria Voichita, the third (and last) wife of Stephen the Great. The image is found on a dvera (curtain covering the altar door), richly embroidered; the piece is known as the Dvera of Crucifixion; it dates back from 1500 and is now found in the Museum of the Putna Monastery.

Maria Voichita was the daughter of Radu the Handsome, four times ruler of Wallachia (1462-1473, 1473-1474, 1474, 1474-1475), and of his wife, Lady Maria Despina. She married Stephen the Great probably in 1478, after the prince had been widowed for the second time, following the death of Maria Comnena (Maria de Mangop), in 1477. The marriage followed dramatic events: in 1473, Stephen the Great undertook a military expedition in Wallachia, to dethrone Radu the Handsome and enthrone a pretender supported by him, Basarab Laiota the Old. Stephen the Great’s relations with Radu the Handsome were always hostile; Radu, raised in Constantinople, was too close to the Turks to be a comfortable neighbour to the voivode of Moldavia. Stephen the Great dethroned him several times, through military interventions. Maria Voichita and her mother, Maria Despina, were taken hostage and taken to the citadel of Suceava. Voichita grew up, therefore, at Stephen’s court, and eventually he married her. He had with her two daughters and a son, the future voivode Bogdan III, who ruled in Moldavia between 1504 and 1517.

On the two “first day” covers of the issue are represented Lady Milita Despina, the wife of Neagoe Basarab, ruler of Wallachia (1512-1521), and Lady Stanca, the wife of the voivode Michael the Brave (1593-1600).

Romfilatelia thanks the Romanian Academy Library, His Eminence Calinic Argesanul, Archbishop of Arges and Muscel, Putna Monastery, the Church of St. Anton in Curtea Veche in Bucharest and dr. Sorin Iftimi at the Museum of History of Moldova within the “Moldova” National Museum Complex Iași, for their support in developing this postage stamps issue.

The postage stamps issue “Ladies of the Romanian Voivodes” will be available on Friday,  May 21st 2021, in Romfilatelia’s shops network in Bucharest, Bacau, Brasov, Cluj-Napoca, Iasi and Timisoara and online on https://romfilatelia.ro/store/.

The postage stamps issue is completed by two “first day” covers, sheet of 28 stamps + 7 labels and minisheet of 4 stamps with illustrated border. 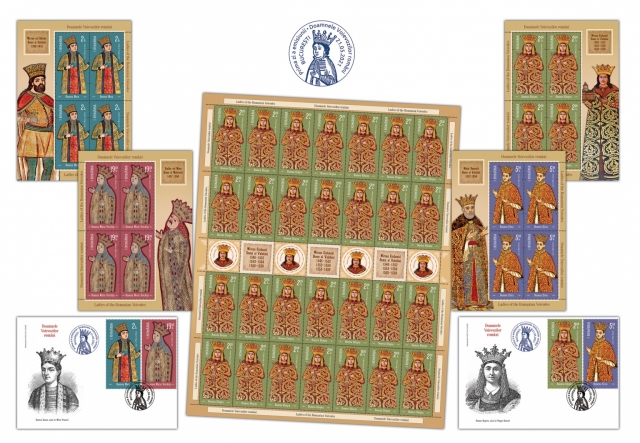 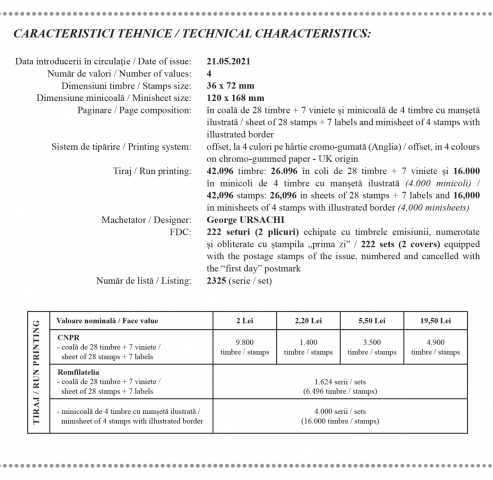 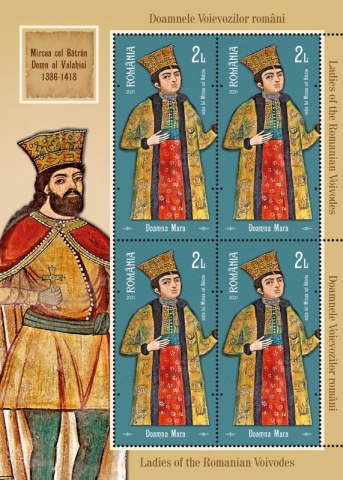 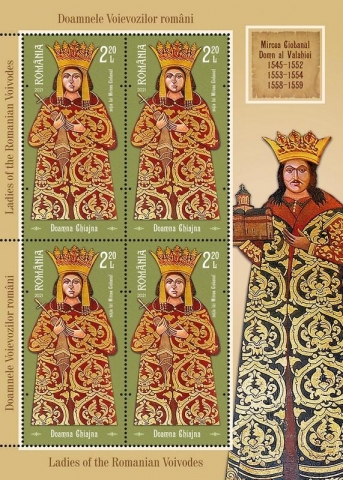 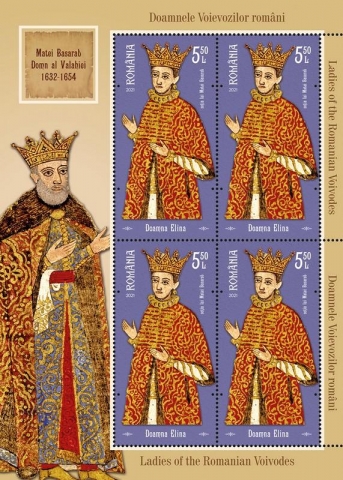 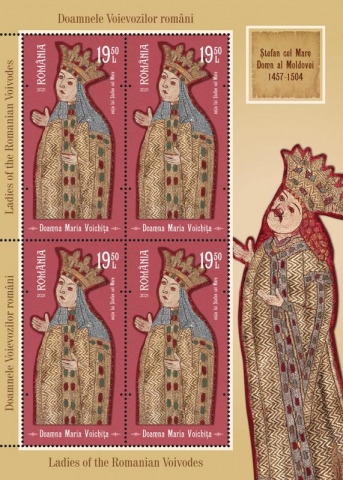 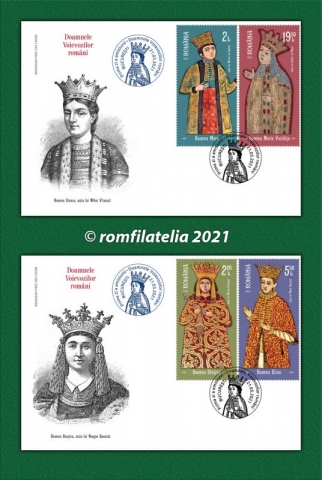 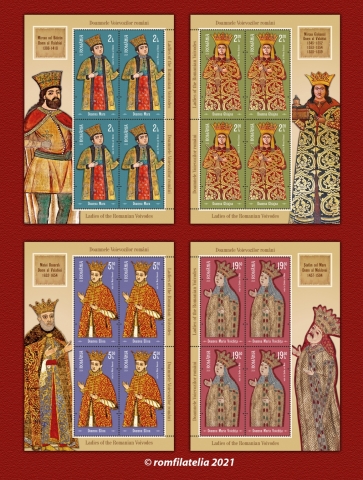 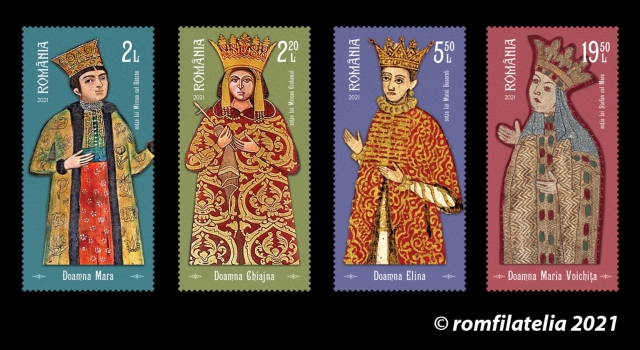 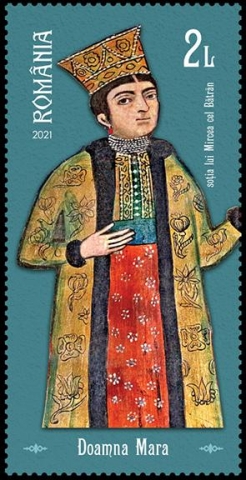 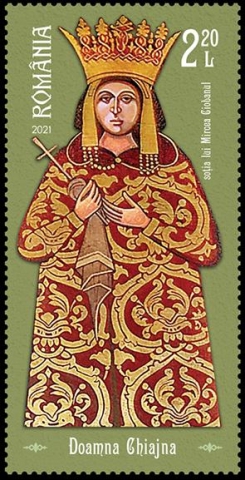 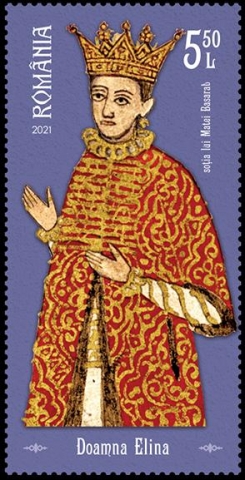 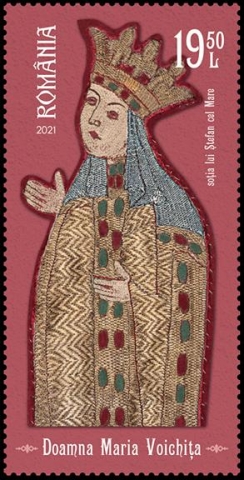 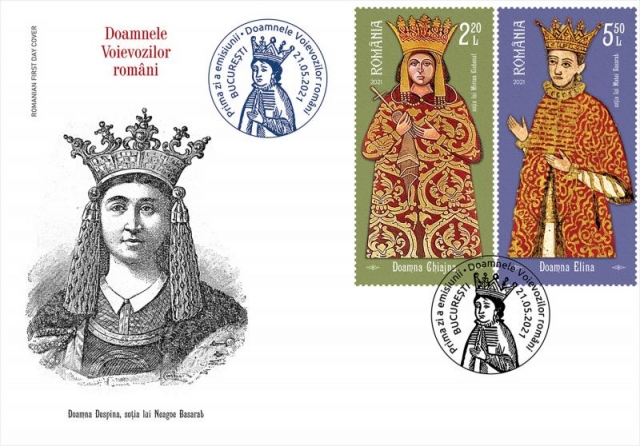