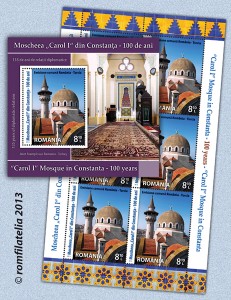 On the 135th anniversary of establishing diplomatic relations between Romaniaand Turkey(1878), Romfilatelia introduces into circulation the postage stamps issue dedicated to “Carol I” Mosque in Constanta.

A symbol of harmony between two communities of different confessions, the Mosque “Carol I” in Constanta, called by the Muslims “Kral camisi” or “the Mosque of the King”, was built on the site of Mahmudia Mosque (constructed in 1882).

Monument of Moorish architecture, the new edifice was built following the personal initiative of the Romanian King Carol I who entrusted the architectonic project to a famous specialist of the time, Victor Stefanescu. The main Muslim place of worship in our country, included on the list of the most beautiful Romanian architectural monuments, reunited the talent of a great architect and the ingenuity in constructions of a world science personality, Gogu Constantinescu.

An engineer with a unanimously recognized reputation and a scientist whose name is found on the list of great scholars, besides the name of Albert Einstein, Gogu Constantinescu used the reinforced concrete technique in the construction of the edifice inConstanta, based on original calculations for the resistance of domes and cupolas.

The elements that may be seen on the cupola of the mosque represent symbols of Christian inspiration, especially belonging to the Byzantine art. The geometrical shapes and proportions represent a sequel of the prototypes of the great Christian cathedrals and churches, turned into mosques by Muslims, starting with the well known Hagia Sophia Cathedral inIstanbul.

The 47 meters high minaret tower of the Muslim place of worship inConstantadominates the landscape of the area and hosts 140 steps within its cylinder, allowing visitors to reach a terrace wherefrom they may admire the city’s panorama.

One may get inside the “King’s Mosque” by using the two massive black marble doors, designed and completed with bronze ornaments, after the model of the sultans’ palaces.

The space of the room designed for the ritual of Muslim services describes a square having the side of 14 meters whose walls are austere, with simple decorations represented by octagonal paintings of small sizes, on which the names of Allah and prophet Mohamed are written in Arabic letters.

From the middle of the high cupola confined by windows, a beautiful chandelier of Arabian inspiration comes down in a perfect balance. The ceiling of the room painted in nuances of blue and stylized floral motifs suggests the vault of heaven.

The altar where the mass is officiated looks like a niche specially arranged in the wall oriented towardsMecca. On the right side of the altar there is the “minbar”, the place where the Imam preaches the mass on Fridays and holidays. The number of steps up to the balcony of the “minbar” is uneven and the Imam always preaches by sitting two steps lower than the last step of the stairs.

Certain portions of the interior walls are plated in special wall tiles, donated in the year when the construction was started (1910) by the Turkish state and destined only to places of worship. The plates are colored in nuances close to the ones on the ceiling and are decorated with resembling floral motifs.

Among the numerous objects of patrimony belonging to the mosque, Abdul Hamid’s carpet is held in a place of honour, being one of the oldest Oriental carpets having a surface of 144 square meters. Initially donated by the sultan to a place of worship located on Ada Kaleh island, this was subsequently donated to the Muslin place of worship in Constanta, after the Danube waters covered the mirifical island in 1970, following the commissioning of Iron Gates Hydroelectric power station.

Clearly defining the confession to which the place of worship in Constantabelongs, the highest altitudes of the cupola and tower exhibit the symbol of the Muslim world, the crescent.

In 1913, on 31st May, the mosque was inaugurated in the presence of King Carol I and Queen Elisabeth, the royal family giving this edifice to the Muslims in Constanta and not only, for their loyalty towards the Romanian state.

The joint stamp issue Romania – Turkey “Carol I” Mosque in Constanta – 100 years marks a century of existence of this place of worship, the stamp with the face value of lei 8.10 and the souvenir sheet of the issue reproducing the mosque in an exceptional graphic and artistic manner.

We address our thanks to the Muftia of Muslim Cult from Romania for the support granted in the accomplishment of this postage stamps issue.
Issue date: 2013-10-10 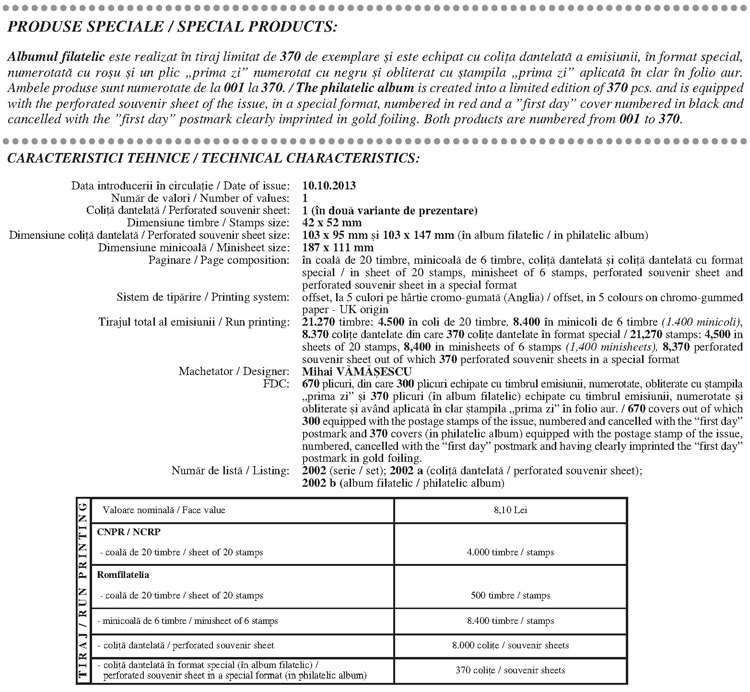