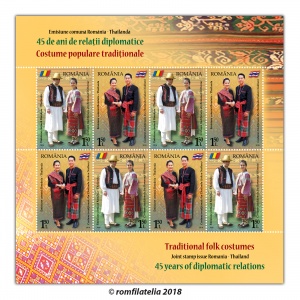 On the anniversary of the bilateral relations between Romania and the Kingdom of Thailand, settled on the 1st of June 1973, Romfilatelia introduces into circulation the joint stamp issue Romania-Thailand, 45 years of diplomatic relations, with the topic Traditional Folk Costumes. The Romanian stamp, with the face value of Lei 1.50, illustrates the folk costumes of Oltenia region, specific to Romanati area, from the end of the 19th century. The traditional folk costume of Phutai ethnic group, from the northeast of the country, is reproduced on the stamp issued by the Thailand Postal Administration.

The Kingdom of Thailand is known for its natural beauties, being visited annually by millions of tourists. It is also one of the oldest Asian states, where ancient civilization have developed. The first Thai Kingdom was founded in 1278, named Siam, a name that lasted until 1939, when the state was renamed Thailand. More than 67 million people live in the Asian country, from seven ethnic groups: thai (75%), Chinese (14%), Mon, Khmer, Lao, Malay, Indians. The inhabitants are 95% Buddhists. Thailand is also called “The country of smiles”, due to the hospitality encountered by the tourists.

The most important Thai city is the capital of Bangkok, a growing financial and economic center, but also one of the largest ports in South Asia. The city has many UNESCO World Heritage sites, including 300 Buddhist temples and the Royal Palace. The most modern Thai resorts are in Hua Hin region, which has a 3 km long beach, with spectacular views. Hikers can choose the Isaan region, known for its special landscapes.

In north-eastern Thailand, there is the Sakon Nakhon region, a place full of history, famous for its Buddhist temples, secluded in wooden areas and preferred by ascetics for meditation. The region is also appreciated for handicraft products, made of cotton and silk. The capital of the region, also called Sakon Nakhon, is an important Buddhist culture center with five stupas (Buddhist funeral monuments).

The traditional costume, illustrated on the stamps of the issue, represents, for each people, an integral part of the local history and civilization, a living testimony that has passed to the generations, over the centuries, the message of the authentic artistic creation.

Romanati costume falls in the typology of Oltenian traditional costume, remarked by compositions and decorative motifs, that refer to the ornamental repertoire of the Neolithic ceramics of Vadastra – the spirals on the sheepskin coats – and to the pomposity of the gold thread fabrics, from the embroidery of the women’s chemise.

Women’s garment consists of a wavy at the collar chemise, with a decoration on the sleeve in tripartite system (“altita” – wide embroidery, wrinkles, rivers) on the chest, back and legs. The refinement of the chemise is given by the chromatic relationship between the cherry and the silver metallic thread. The tissue apron is associated with the folded up “valnic”. The garment also contains wool socks and bovine leather sandals.

The men’s costume consists of a summer straw hat, an embroidered shirt adorned with “coltisori”, trousers, socks and sandals. The loom woven belt and the doublet decorated with rosettes on the entire surface, in vivid colors, complete the costume.

The traditional folk costume of Phutai ethnic group, in north-eastern Thailand, Sakon Nakhon Province, is specific to the countryside. The man wears a long cloth and a cotton, long-sleeved, navy-colored shirt, edged with red embroidery and a belt, in harmony with the costume of his partner. The woman wears a cotton, navy blue skirt, decorated with woven embroidery, and a simple, long-sleeved shirt of the same color. The costume is completed by a red embroidered scarf, worn on shoulders and silver jewellery – necklace, bracelets and earrings.

Romfilatelia thanks the “Dimitrie Gusti” National Village Museum of Bucharest and the Thailand Postal Administration for the support granted for the achievement of this postage stamp issue. 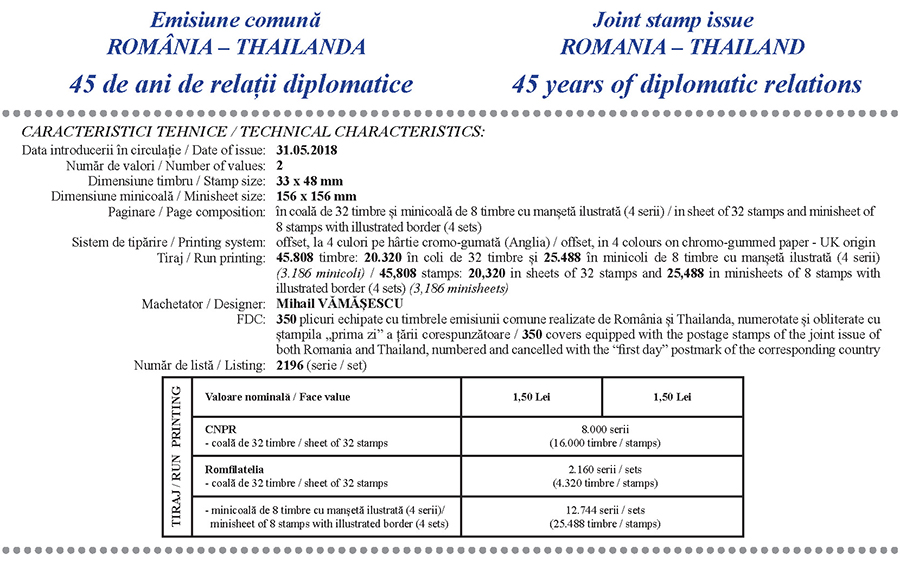