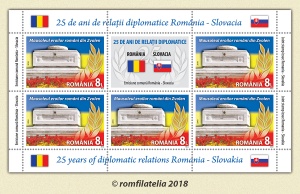 Romfilatelia introduces into circulation the joint stamp issue Romania-Slovakia, 25 years of diplomatic relations. The stamp, with the face value of Lei 8, illustrates the Romanian Military Cemetery from Zvolen.

Romanian-Czechoslovak solidarity also manifested during World War II. After the liberation of the last Transylvanian territories, on October 25th, 1944, the Romanian army continued the march to liberate Central Europe from the Nazi troops. The struggles for the liberation of Czechoslovakia, to which 250,000 Romanian soldiers participated, ended on May 12th, 1945. The Romanian troops transited Czechoslovakia for 400 kilometers, escalated
ten mountain massifs, and crossed four large water courses.
During this operation, 1,722 localities were freed, out of which 31 major cities. The blood tribute of the Romanian army was impressive – over 65,000 dead, wounded, frozen and missing soldiers.

The choice of Zvolen as the place where the remains of the soldiers fallen on the territory of Slovakia were laid to rest also had a memorial meaning. The Romanian army fought in the area of Zvolen in February 1945, and the city was liberated with great sacrifices, in the conditions of a harsh winter. The operations for the identification and exhumation of the Romanian heroes fallen in Slovakia took place between October 15th and December 20th, 1951. Architectural works were subsequently carried out, and the Central Military Cemetery of the Romanian Army from Zvolen was inaugurated on July 27th, 1958.

In the center of the Romanian Military Cemetery, a mausoleum plated with white marble is placed, on which lays a Romanian voivodal sanctuary. Above the sanctuary, is placed a torse carved in stone, which represents laurel leaves. The imposing monument has an entrance of nearly 50 meters. On the front side of the assembly, the following text was carved in stone, in both Romanian and Czech: “Eternal Glory to the Romanian heroes fallen in the battles for the liberation of the Czechoslovak Republic from the fascist oppression – 1944-1945”. In 1963, the mausoleum was declared a cultural monument by the Czechoslovak government.

The Romanian Military Cemetery is organized in four areas, where 10,384 fallen heroes for the liberation of the friendly State were laid down. There are 494 individual graves, for the military officers, which are marked by tomb-stones, each mentioning the rank, the name and surname and the military unit of the each hero, as well as the place where he fell in battle. The rest of the soldiers were sited in collective graves, arranged in the alphabetical order of the Slovak settlements where they had been buried during the war. Their names are mentioned on a commemorative bronze plate. The assembly of Zvolen is the largest Romanian military cemetery from abroad.

Currently, the Romanian Military Cemetery is in the care of the Slovak state, in accordance with a bilateral agreement, signed in November, 2006.

Romfilatelia thanks the Romanian Embassy in Bratislava, the Slovak Post Office and the National Office for Heroes Cult for the documentary and photographic support provided for this joint stamp issue. 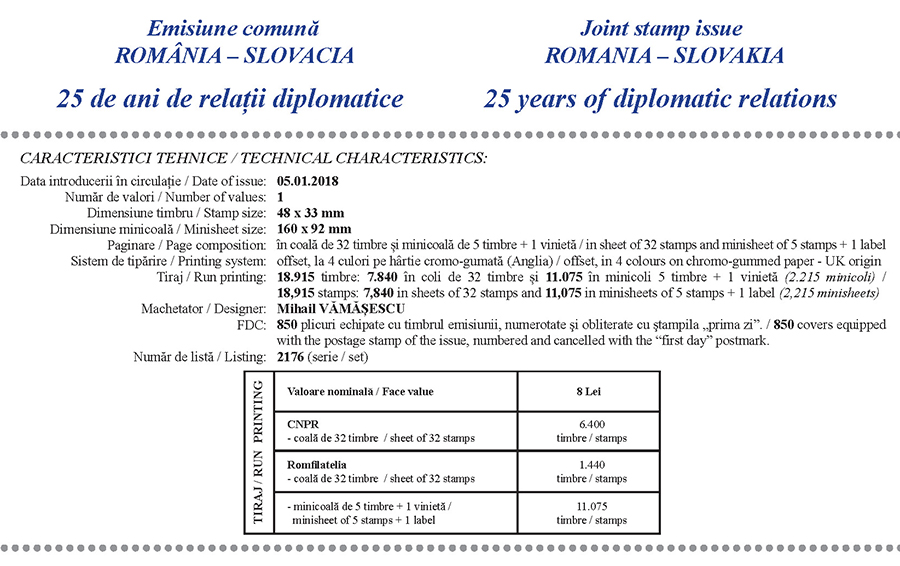