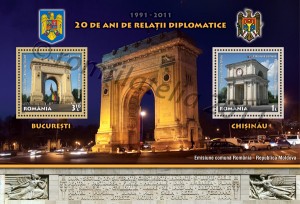 On 27 August 1991, the Parliament of theRepublic of Moldova gathered in an extraordinary meeting adopted the Declaration through which they proclaimed the country’s independence and on 29 August 1991 the diplomatic relationships between Romania and the Republic of Moldova were established at the embassy level.

To mark the two decades that have passed since this event, Romfilatelia introduces into circulation the joint stamp issue Romania – Republic of Moldova: 20 years of diplomatic relationships.

The stamp with the face value of 3.10 lei reproduces the image of a representative monument in the Romanian capital city, the Arch of Triumph.

Erected to commemorate the sacrifice of the Romanian soldiers who died on the battlefields of the World War I and to honour the memory of those ones who achieved the Great Union of 1 December 1918, the Arch of Triumph was built in 1922 after a provisional design meant to ensure a very short execution time and low costs.

In 1930, it is decided its restoration after a blueprint elaborated by the well-known architect Petre Antonescu who mobilized for execution a team in which we may find Constantin Baraschi, Alexandru Calinescu, Ion Jalea, Mac Constantinescu, Dimitrie Paciurea and Costin Petrescu.

Having as model a similar monument fromPariserected by Napoleon I in 1806, the architect Petre Antonescu finished the Arch of Triumph in 1935. The reliefs executed in a Roman style belong to the sculptors Corneliu Medrea, Frederic Storck, Dimitrie Paciurea, Oscar Späthe and Constantin Baraschi.

Built on a 25 x 11.5 m surface, 27 m high, the Arch of Triumph is plated with granite from Deva and Ruschita marble.

On the Southern façade of the monument they placed two medallions with the faces of King Ferdinand and Queen Marie. Two bas-reliefs representing the Victory, harmoniously complete the surface of the rectangle visible above the arcade.

The Northern façade displays two medallions, on whose relief can be distinguished the faces of a warrior with a sword and a young man bearing a cross. The characters join the symbols of Manhood and Faith.

The emblem of Bucharest, the Arch of Triumph belongs to the list of monuments built to celebrate the sacrifice and courage of the Romanian soldiers in the fights during World War I, a list on which we may also find the Tomb of the Unknown Soldier, the Marasesti Mausoleum, Romanian Heroes’ Cross on Caraiman mountain peak, the Coronation Cathedral in Alba-Iulia.

The postage stamp with the face value of 1.00 lei illustrates the Holy Gates of Chisinau. They group on a symmetrical axis the Birth of Christ Cathedral, the Belfry, the Grand National Assembly Square and the building of the Government of the Republic of Moldova. The Arch of Triumph making part of the zone ensemble was built between 1840 and 1841 to celebrate the victory of the Russian armies against those ones of the Ottoman Empire. The design of the monument was elaborated by Luca Zauskevici, the chief architect of Chisinau. 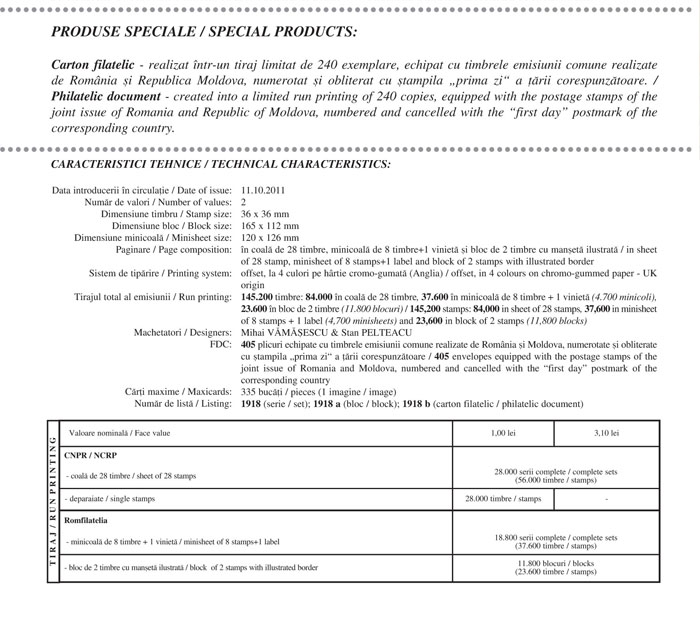