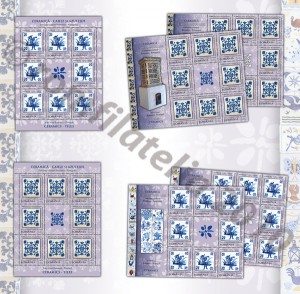 Magic of fire and mystery of the clay moistened by the life-giving water, the modeling in clay become human being’s first step towards art and craftsmanship.

Appeared in the Middle East around 7800 B.C., the ceramic was decorated by incisions, stone polishing or pressing after almost two thousand years later; in 1200 B.C., they started using colours as well.

A remarkable pottery development was attested in the Middle East, in the entire Mediterranean basin and it also expanded to the Roman world and Byzantium.

Both the household objects and the ones used for the houses and palaces adornment continued to experience diversity until the Renaissance.

The Royal palaces and churches were decorated on walls with coloured and enameled bricks. Simultaneously, the plates – glazed stove tiles – for stove making appeared, leading to the development of manufactures where potters made these clay pieces.

The stove tile, a clay plate burnt into the oven until red, mica powdered or enameled, had a square or rectangular shape and was used for building heating or food preparation systems.

The archeological discoveries in the 14th and 15th centuries showed the elites’ preferences for decorating rooms with fireplaces built of tiles.

The patterns on the tiles are geometrical, zoomorphous, phytomorphous, anthropomorphous, heraldic, religious.

The image reproduced on the postage stamp with the face value of RON 3.10 represents a Saxon origin tile from Bistrita-Nasaud County, dating back from the half of the 19th century, which belongs to the patrimony of the Romanian Peasant Museum in Bucharest. It was modelled by pressing the clay in a mould, was burnt in the oven, enamelled and painted by means of a horn.

The piece has a rectangular shape, depicted with stylized floral motifs: daisies, tulips and carnations placed in its center and corners.

The Azulejos are painted tin-glazed tiles used to cover large surfaces, either inside buildings or on their façades. Azulejo is a word deriving from the Arabic word al-zulayi (meaning “polished stone”).

In the early 16th century, in Seville, the ceramic plates were used to decorate a monumental wall for the first time.

The technique used to process the ceramic has continuously evolved from the Moorish geometric and laced themes, up to plant and animal themes.

The Azulejos constitute one of the representative elements of the Portuguese culture revealing the symbiosis between this culture and the European and Arabic ones.

Also, using Azulejos as thermal insulating and waterproof material reveals a practical, but also esthetic sense, given to these ceramic plates.

Used for more than five centuries and having a major role in architecture, the ceramic plates (azulejos) represent for Portugal not just a state of mind but also an emblem.

The image reproduced on the postage stamp with the face value of RON 2.10 illustrates an azulejo, dating back in the 18th century, Lisbon, from the collection of the National Tile Museum in Lisbon. 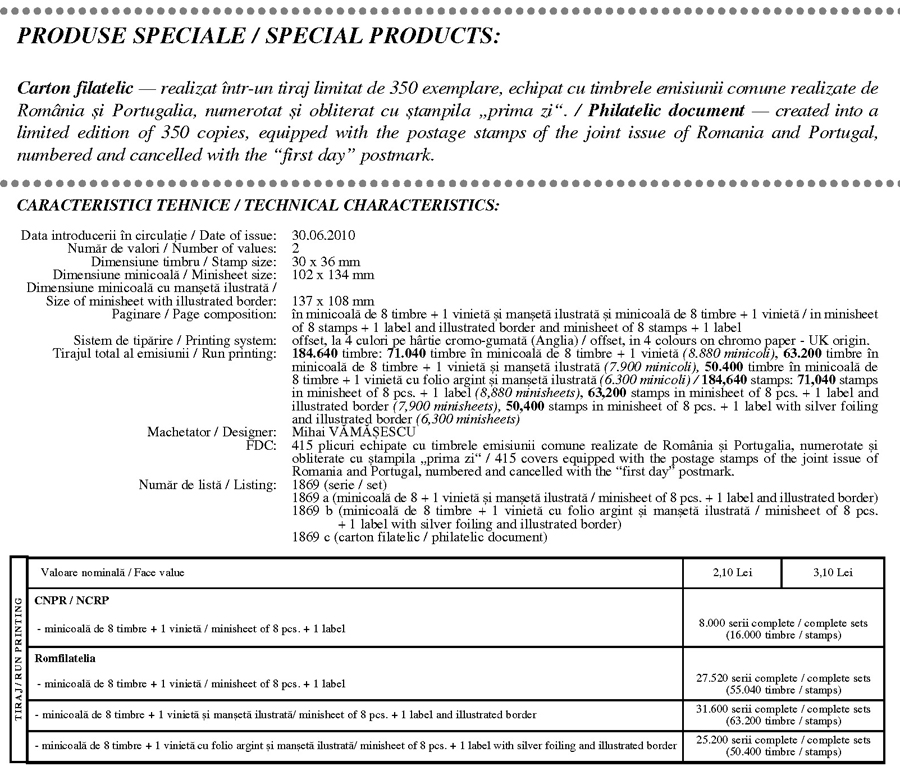