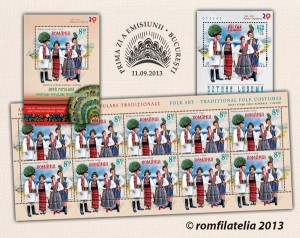 The 25th of January 2013 marked 20 years since signing the Treaty on friendly relations and cooperation between Romania and the Republic of Poland, occasion on which Romfilatelia introduces into circulation the joint stamp issue Romania – Poland with the theme Folk Art – Traditional Folk Costumes.

Folk art is the natural expression of the rural community’s life and aspirations, revealing the sensitivity and life horizon thereof. In the general framework of folk art, the costumes are real “identity cards” of the inhabitants of different geographical areas, being developed following a long creation process and maintaining values of the tradition and culture of numerous generations.

“Folk art is at the limit between religion and magic on the one hand and technics on the other. Sometimes it is brought to life by a magic and religious function and other times is present in practical activities, in constructions, domestic industry, costumes and tools. It is related to the former by the spiritual significance it encloses; to the latter, it is related through the technique by which it is accomplished. Folk art, either in the form of an icon, gate, rug or mug, additionally to and beyond the functions it accomplishes and additionally to and beyond the skill, the craft it requires, reveals a special propensity and artistic talent of this people. The Romanians embellish permanently their works everywhere.” (Ernest Bernea)

The Romanian costume from Bistrita-Nasaud area denotes an optimism plastically expressed by the contrast between the white fabric of the shirts and the strong red of the embroideries. Spectacular and specific to the area are the men’s vests with “canaci”, decorated with successions of polychrome silk tassels and the long sheepskin coat worn by the women, embroidered with floral motifs and lining leather applications and large silk tassles. The hats decorated with a disk-shaped peacock feather, a symbol of the lads and paunitele (peahens), an adornment specific to the girls, are unique in the country. The latter consists in two bead-embroidered circles attached above the ears and surrounded by peacock feathers.

The Polish costume from Krakow area has bright colours and joins beautiful, strong shades of red and blue to black and white. The women wear skirts lavishly decorated with flowers, embroidered vests and beads, especially red. Unmarried girls may wear flower crowns with ribbons, while married women wear head scarfs. Men wear blue vests with embroideries and tassels, pants with vertical white and red stripes and red hats with ribbons and peacock feathers. A precious accessory of the costume is represented by the tall boots worn by both men and women.

The stamp of the joint issue illustrates both the Romanian folk costume from Bistrita-Nasaud area, and the Polish one from Krakowarea. The costumes reproduced on the postage stamp distinguish through the peacock feather, a characteristic joint element, the hats with the disk-shaped peacock feather being a symbol of the lads in both folk cultures. The very brigh tcolours and the floral decorations are accompanied by the pride of each pair wearing them.

The perforated souvenir sheet margin reproduces the logo of the Polish and Romanian friendship designed by the Polish illustrator Jacek Doszyn, whose work won the competition organised at the beginning of 2013 by the Polish Institute in Bucharest under the patronage of the Romanian Ministry of Foreign Affairs and of the Embassy of the Republic of Poland in Romania. The logo is designed to accompany and highlight all the events organised over 2013 on the occasion of the 20th anniversary since signing the Treaty on friendly relations and cooperation between Romania and the Republic of Poland.

We would like to thank the ‘Dimitrie Gusti’ National Village Museum in Bucharest for the support granted in the accomplishment of this postage stamps issue. 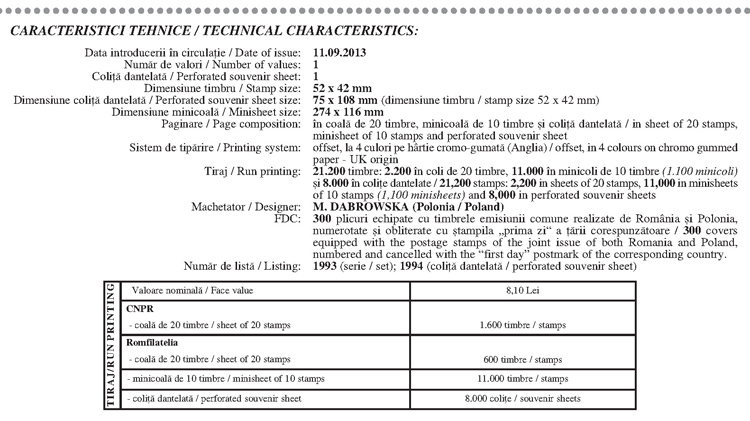