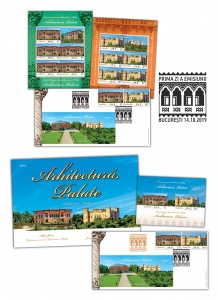 On the stamp with the face value of Lei 1.70 the Mogosoaia Palace, located 15 km from Bucharest, is depicted. It represents, practically, a harmonious historical complex consisting of the palace itself and its courtyard, the watchtower, the guest house, the ice-house and the church “Sfantul Gheorghe” located in the vicinity.  The palace, in Brancovenesc style, brings together Venetian, Byzantine and Ottoman architectural elements. The building, erected at the request of Prince Constantin Brancoveanu, was completed on September 20, 1702, according to the plaque on one of the sides of the palace. After Constantin Brancoveanu and his sons were executed in Constantinople, the palace was taken by the Ottomans and later redeemed by Stephen Cantacuzino, and returned to Constantin Brancoveanu, the nephew of the original owner.

After 1945, the Mogosoaia Palace was nationalized by the Communist regime. In 1957, the palace became a museum, today the host of the Brancovenesc art exhibition and the Aulic Tradition Museum, along with other temporary exhibitions. The interior is still in the process of restoration

The main building has two floors, while the corner towers have five floors, and the entire structure is surrounded by a moat. Although its outward appearance denotes elements of a fort, it was never meant to withstand an attack, the elements being symbolic and aesthetic. The building was completely restored during the reign of Sir William Reid in 1850, although restoration work was begun by Governor Frederik Cavendish Ponsonby. Over the years, the building has been used as a military prison for French soldiers captured by the British and Maltese during the blockade of 1798-1800. Later, it was used as a silk factory until 1850, when Governor Sir William Reid ordered its complete restoration. Subsequently, it became the official summer residence of the British governors and a place of reference where guests of honour were found, among them the Empress of Russia (1909), the Emperor of Germany (1919) and the King of England (1943).

The postage stamps issue Romania-Malta Architecture, Palaces will be available on Friday, October 11th  2019, in Romfilatelia’s shops network in Bucharest, Bacau, Brasov, Cluj-Napoca, Iasi and Timisoara and online on https://romfilatelia.ro/store/.

The postage stamps issue is completed by the “first day” cover, as page composition in sheet of 32 stamps, minisheet of 5 stamps + 1 label and block of 2 imperforated stamps.

The philatelic album is created into a limited edition of 211 pcs. and is equipped with the block of 2 imperforated stamps of the issue and the First Day Cover having the “first day” postmark clearly imprinted in foiling. Each element is numbered from 001 to 211. 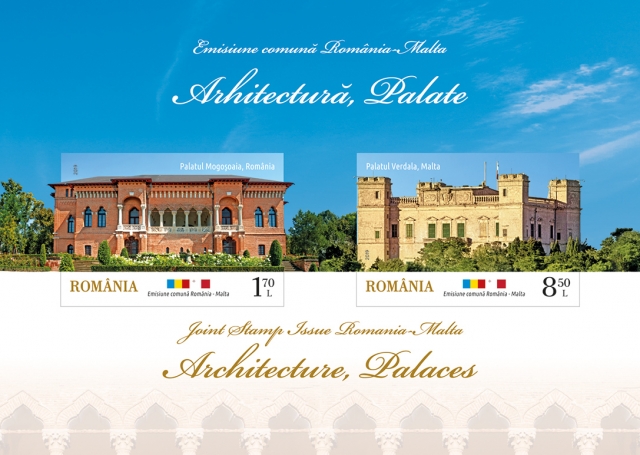 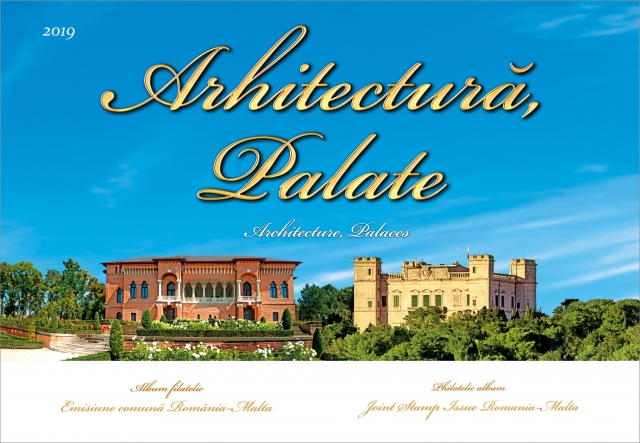 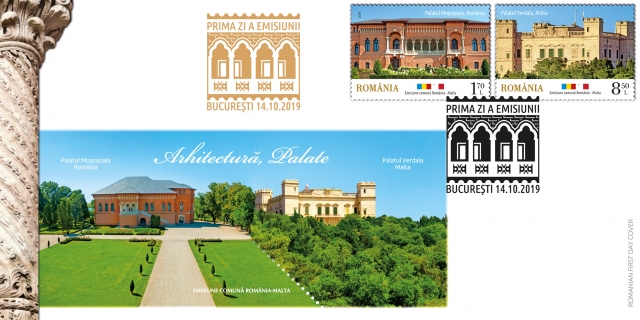 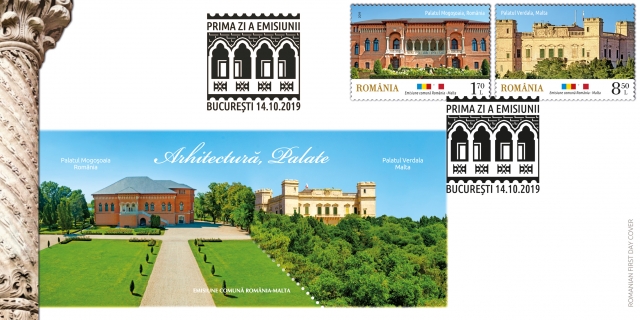 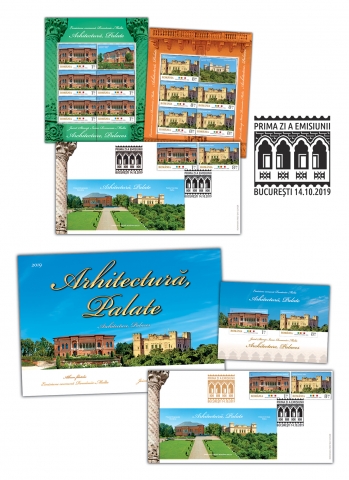 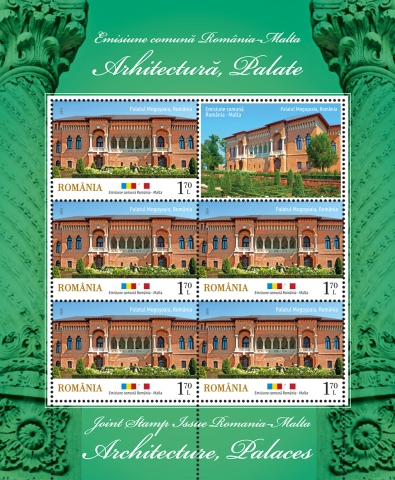 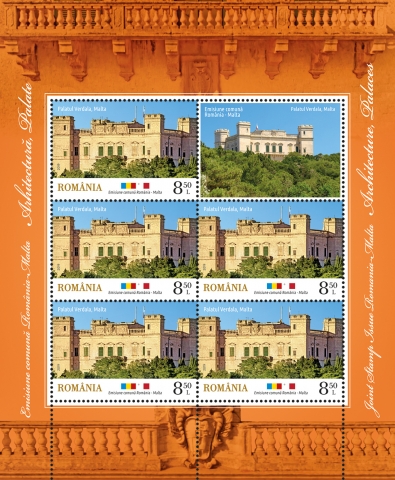 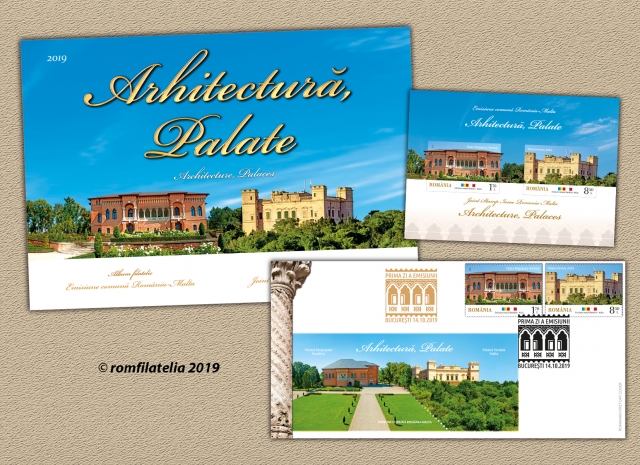 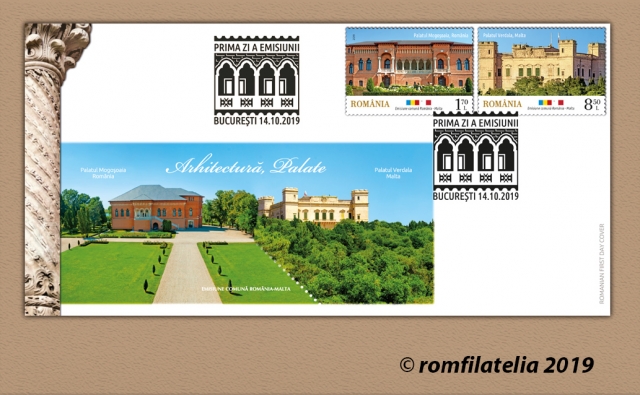 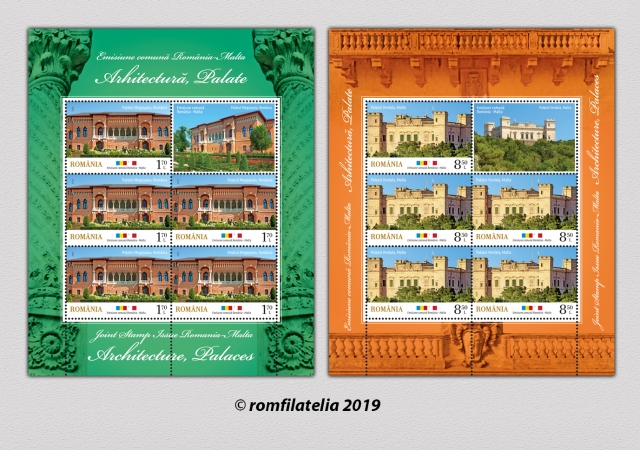 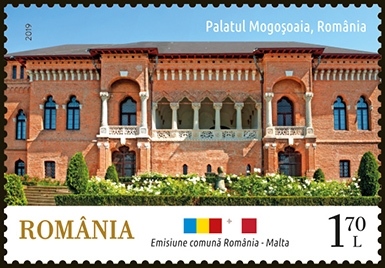 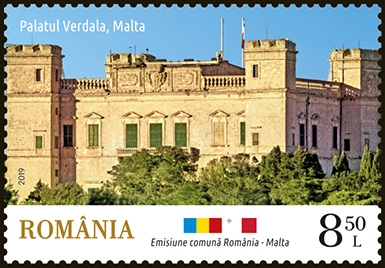