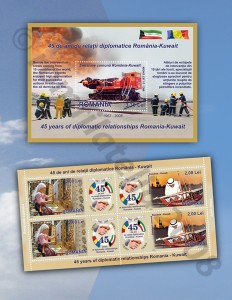 Romania has established embassy diplomatic relations with the State of Kuwait on June 10, 1963, the Emirates being the first country in the Arabian Gulf Region that established diplomatic relations with Romania and other East European countries. Equally, His Royal Highness, the Emir of the State of Kuwait was the first chief of state in the Arabian Gulf region to visit Romania in 1981.
After 1990, Romanian presidents have paid official visits in Kuwait (1992, 1999) which consolidated bilateral political and diplomatic relations, a dialogue further enforced by the visits that the high officials of Kuwait took to our country, the most recent of which being the official visit paid by the Prime Minister of Kuwait in Romania in 2006, occasion on which the Embassy of the State of Kuwait in Bucharest was officially inaugurated.
As a partner country, Romania took an active part in the freedom movement initiated by the State of Kuwait, ultimately playing an active role in its reconstruction process when several specialized institutions put forth their efforts and resources and helped in the extinction of the oil wells ablazed during the
hostility period.
The political and diplomatic relations between the two countries were meant to fully revaluate all opportunities arisen from the high quality of the bilateral political dialogue regarding the development of the bilateral juridical sphere in common interest domains and equally the materialization of certain important economic decisions.
In what the bilateral economic relations are concerned, Romania and the State of Kuwait have joined their forces in an effort to sustain the cooperation between business partners in the two countries, the evolution of commercial exchanges during the last couple of years having known a positive trend, witness of the economic breakthrough of the two countries, entirely exploited for the common interest of the two nations.
The image of the souvenir sheet illustrates the struggle for extinction of the ablazed oil wells in which the Romanian firemen team played an important role using special equipment.
The two postage stamps of the issue illustrate images of traditional arts and crafts such as hand-woven in Romania and handicraft sketches of sailing ships in Kuwait.
The endowment of Romanian ancestors in traditional woven is very well presented by Herodotus who compared the Dacian hand-woven fabrics with those found in the Citadel of Rome.
In turn, fascinated by the everlastingness of the seas, the inhabitants of Kuwait are currently
reintroducing sketches of sailing war and commercial ships into the houses of all miniature ship lovers.
Bonding traditions and tight collaboration and supportive relations into an unitary outset, the joint stamp issue is rightfully considered an important landmark in the history of the Romanian respectively the Kuwaiti people at a time when bilateral relations experience an ascending path.