Beside the political spectrum, there are cultural and historical ties at the basis of the Romania-Israel bilateral relations. The national anthem of the State of Israel, Hatikva (Hope), has some Romanian “influences”. The saying is that Naphtali Herz Imber started to write the words of the song already in Iasi, in the years 1876-1878. Furthermore, some say that the music for the anthem is based on a Romanian folk song named “Carul cu Boi”. It is also worth mentioning that the first Israeli plenipotentiary ambassador accredited to Bucharest was the famous painter Reuben Ruvin, of Romanian origins.

In the period 2008-2009, the State of Israel organizes a series of manifestations related to the celebration of 60 years from the regaining of independence and of uninterrupted diplomatic relationships with Romania.

In this context, Romfilatelia and the Postal Administration of the State of Israel have achieved this joint stamp issue dedicated to the founder of the First Yiddish Theatre in the World, Avram Goldfaden (1840-1909).

“It so happened that I founded the Jewish theatre in Romania, a country with a Jewish population that did not have any idea about the dramatic literature… The physical and spiritual nourishment of our audience of that time consisted in a good glass of Odobesti wine and Jewish songs.” (Avram Goldfaden)

Born in 1840 in Staro-Konstantin town (Russia), Avram Goldfaden would attend “The Heder” (the Jewish traditional school for children). He would study German, Russian and music.

In 1866 he finished the Rabi School from Simferopol, where he would work as a teacher, then went to Odessa, where he would live in an uncle´s house. In 1866 he also published his first volume of poetry in Yiddish.

While staying in Odessa he made acquaintance with the Hebrew language poet, Eliahu Mordehai Werbel whose daughter he would marry later on.

In 1869 was published the volume “The Hebrew girl” whose content also includes his first plays in Yiddish “The two woman neighbours” and “Aunt Zose”. In 1875 he left for Munich with the intention to study medicine, but he would give it up soon afterwards.

After a short period of time spent in Cernauti, Golfaden arrived to Iasi. He was called by Ithak Librescu who would convince him to publish a newspaper and even to present small shows in a bar. Goldfaden, being already known due to his songs, played in the pubs and was frequently visited by the Jews from the towns where he had passed through.

Goldfaden´s appearance in Iasi strongly impressed the locals because of his theatrical personality: he was the author, the actor, the musician, the director and the manager. Goldfaden was the whole theatre.

Romania, Iasi, August 19th 1876, Simen Mark´s garden “Pomul Verde” (Green Tree) – the place where the first theatre in Yiddish language of the world was created and whose first report was written by nobody else than the national poet, Mihai Eminescu in “the Courier of Iasi” (Friday, August 20th 1876).

“In a garden on the large lane they opened a small summer theatre where actors act in Jewish language… The troupe made of about six individuals (all of them men) has a characteristic repertory referring only to Jews´ domestic and religious life. Thus, on Thursday, August 19th, they acted: 1) “Lumea ca un paradis” (The world as a paradise – a satiric little song); 2) “Filosoful amorezat şi hasidul (habotnicul) luminat” (The infatuated philosopher and the wise bigot – a dialogue); 3) “Socrul si ginerele” (The father- in- law and the son-in-law); 4) “Fişel harabagiul cu randasul sau Sidr” (Fisel the carter and his servant Sidr – a comedy). We cannot say much about the plays – they do not present a great dramatic interest, but actors´ performance was superb… The troupe manager has a nice (baritone) voice and a kind face. The arias are Jewish and the audience, mainly made of actors´ coreligionists, has a nice time.”

Starting from the same year, Goldfaden organized tours with his troupe to Odessa, Braila, Galati, Botosani, and in 1877 they arrived at Bucharest where they acted on the permanent stage of “Lazar Cafegiu” salon from Vacaresti Square.

He had a tight collaboration in the field of Romanian theatre with Ion Ghica, the General Manager of Theatres of that time.

Sankt Petersburg, Warsaw, Paris, Lvov are just a few of the cities where Goldfaden made himself conspicuous through his talent as writer and actor.

Arrived in New York, in 1887, where there already were all the former pioneers of the Hebrew theatre from Romania, Goldfaden organized a troupe with which he put on the play “Trompeta Fermecata” (The magic trumpet) at “the Romanian Opera House”.

He left again to Europe from where, after several wanderings through the capital cities of the old continent, he returned to New York in 1905 where he would write the play “David în Rãzboi” (David at war) for the young Hebrew speakers, a play directed by himself, with his own music. In March 1906, the play was performed for the first time. It was the first show which was performed in Hebrew that was acted in America.

On December 25th 1907, also in New York, at the “People´s Theatre”, under Boris Tomasevski´s direction, Goldfaden´s play “Bel Ami” had its première, a four-act musical based on H. Friedzel´s music, and the couplets based on Mogulescu´s music. Received with great applause, enthusiasm, and positive reports, this was the last play to whom first five performances Goldfaden was also present.

On January 9th 1908, Avram Goldfaden, the father of the first Yiddish theatre and the one who signed the birth certificate of the American musical, left this world being buried in the Jewish cemetery “Washington Cemetery”. The burial procession was impressive: more than 75,000 people, the traffic was jammed in Manhattan, and several hundreds of policemen maintained the order.

Being considered a Jewish “Shakespeare”, the Times newspaper from January 12th 1908 wrote: “Since Italy has declared national mourning for the death of the poet Carduci, no other poet has ever had such funerals like Avram Goldfaden.”

Avram Goldfaden remains a remarkable personality of world theatre leaving behind him more than 60 plays, many of them being acted even today.

And if we were to summarize Avram Goldfaden´s life and work in just two phrases, the most appropriate would be the ones found in his “Memories”: “…You laughed heartedly and had fun listening to my jokes and I, looking at you felt my heart crying. Now, my brothers, I gave you a drama, a tragedy inspired by life, you cry – and my heart will have fun!”

For the documentary consultancy offered in the accomplishment of this philatelic issue, we kindly thank the Embassy of the State of Israel to Bucharest, the Federation of Jewish Communities from Romania and Jews´ Association from Iasi. 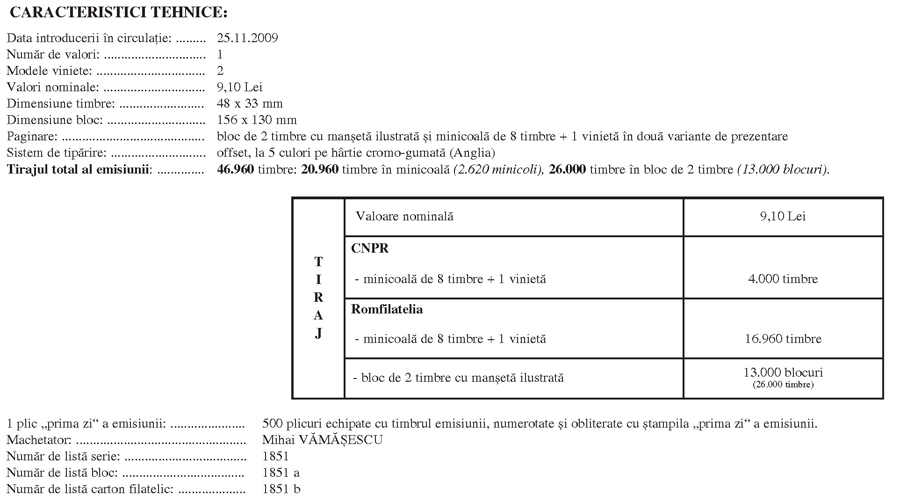