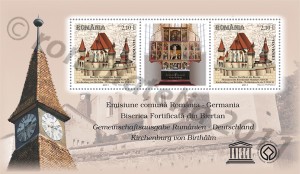 Halfway between Medias and Sighisoara, in Transylvania Plateau, there is one of the earliest Saxon settlements from this part of the country.

Halfway between Medias and Sighisoara, in Transylvania Plateau, there is one of the earliest Saxon settlements from this part of the country.

Documentary attested for the first time in 1283, the village, like any other Saxon settlement, had a central square around which there were rows of houses.

In the contents of a “Papal Indulgence” given in 1402, there appears the name of a church called Saint Mary. On its place, in the middle of the village, on a hill, there lays today the imposing Biertan fortress-church, built between the 15th and the 16th centuries (1490-1524).

The architectural elements of the edifice belong to the late Gothic, the Renaissance and Baroque styles as well. The interior paintings of the halidom were made between 1515 and 1524.

The church is not only the last edifice of this type (hall-church) built inTransylvania, but also the best preserved in time. For almost 300 years, Biertan was the headquarters of the Lutheran Protestant Episcopate of Transylvania, between 1572 and 1867.

Following the frequent attacks of the Ottomans and Tatars, the Saxons fortified their church with three walls and eight towers, out of which we mention The Catholic Tower, The Wooden Bell Tower, The Bastion Prison Tower or The Clock Tower. The Tower’s horologe bears the Latin inscription: “Jesus in aeternis rex judeorum”(Jesus, the Jews’ King for ever – 1508).

An important piece of the church is the bronze disk-shaped “donarium”, discovered in 1775, a few miles away from Biertan.

It is a fragment of a 4th century A.D. chandelier and its Latin inscription “ego zenovius votum posui” (I, Zenovius, offeredthis gift) proves the prevalence of the Christianity among the Dacian-Roman population.

The church pulpit carved in one single piece of stone is a genuine work of art, built by the master Ulrich fromBrasovin 1523.

The pews are made of limewood by Johannes Reichmut from Sighisoara between 1514 and 1523.

The door of the vestry, also made by J. Reichmut in 1515, is unique inEuropeboth, for its exterior plate, whose ornaments are special and for its locking system with 19 locksin 19 spots. To open them, one needs a key and a handle.

In 1910, the door with its lock got a prize at the World Exhibition inParis.

The altar is one of the largest in Transylvania and it was achieved by masters from Nürnberg andViennabetween 1483 and 1513. It contains 28 paintings representing biblical scenes.

A valuable inheritance is represented by the three bells: the large bell (15th century), the medium bell (14th century) and the small bell on which is engraved the year 1738.

By its historical and esthetic value, by original architecture preservation and its contribution to the village’s harmony, the fortified church of Biertan, part of UNESCO World Heritage since the year 1993, was chosen as a common element for Romania-Germany joint stamp issue that Romfilatelia introduces into circulation.

It should be mentioned the fact that the unique design of the stamps of the two countries is made by Razvan Popescu, the winner of the philatelic contest that took place in 2010 in Berlin and was organized by the Federal Ministry of Finance Germany and Romfilatelia. 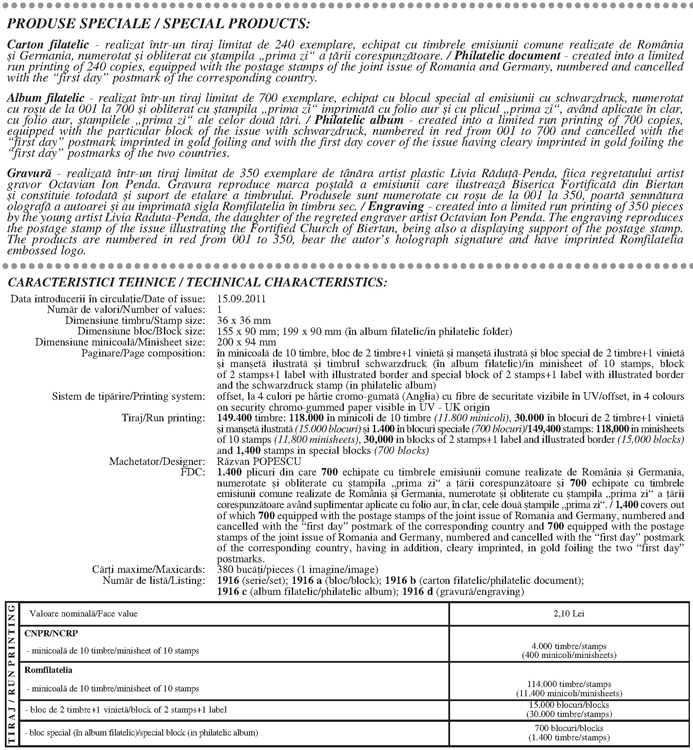