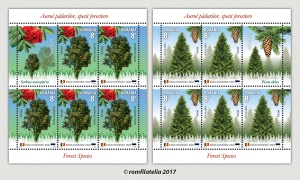 Romfilatelia releases the joint stamp issue Romania – Estonia with the topic Forest Species. The both stamps, with the same face value of Lei 8, illustrate species of rowan tree and spruce.

Romania established diplomatic relations with Estonia in 1924. The Baltic state was occupied by the Soviet Union in 1940 and official contacts being restored in September 1991, when Romania recognized Estonia’s independence.

Rowan tree (Sorbus aucuparia) is a fall-leaf tree that lives at the edge of a wood, in the hill and mountain range, spreading throughout Europe, from the Baltic Estonia to the West of Siberia. It is higher than 10-15 m and has a round crown. The compound leaves, consisting of an odd number of leaflets, are colored in a spectacular red-purple in autumn. Flowers are white, arranged in inflorescences, with an unpleasant smell. Rowan fruits are small, globular, rarely ellipsoidal and usually red. They have a strong astringent taste when they are raw, but can be eaten after the first frost. Also called birds’ Sorbus, they are an important source of food for birds.

The longevity of the rowan tree exceeds a century, reaching its maturity at 10 years, having plenty of fruits every year from that age. It is a smoke-resistant tree and can be grown in polluted areas. It has become very common in parks. Various cultivars of ornamental value, commercially available, have yellow, pink, orange fruits.

The fruits of the rowan tree are very rich in organic compounds, containing tannin, sugars, acids, carotenoids, essential oil, dextrose, vitamin C, salts and minerals. They are used in teas, but also in the production of marmalade, compote, syrup, natural juices, alcoholic beverages etc. Herbal medicine claims that the rowan tree is anti-rheumatic, diuretic, antitussive, hemostatic, antiscorbutic. It is also recommended for the control of vitamin C deficiency or as an adjunct to tuberculosis treatments. However, some specialty studies have not yet revealed how the rowan tree acts on the human body.

Spruce (Picea abies) is a species of conifer, belonging to the Pinaceae family. It is found in both countries, in Romania being present in the mountain and subalpine region, where it forms pure forests (spruce forests) or mixed woods with beech and fir. In Estonia, it occupies the third place as a tree species, after pine and birch trees. The highest specimens of spruce in Estonia grow at Järveselja and are about 48 m high.

A tree with a pyramidal or narrow conical crown, reaching up to 50 m high. Under favorable conditions, spruce can live up to 250 years.

The acuminous, pungent leaves, generally with four edges, are spirally arranged around the branches. Female cones are erect at first, then, after pollination, they become pendent. At maturity, they fall completely.

Spruce seeds contain very valuable active substances and are also used in the diet. They can be eaten raw or roasted, ground, or can be preserved in honey. In Asia and Mediterranean Europe, they are used for seasoning certain types of salads, dishes or meat.

Spruce is soft and easy to process, being used for furniture manufacturing. It provides excellent sound quality and is therefore used in the production of violins, pianos etc. It also has a decorative Christmas role.

Romfilatelia thanks the Botanical Garden “Dimitrie Brandza” of the University of Bucharest for the documentary support given to this postage stamps issue and to the photographer George Avanu. 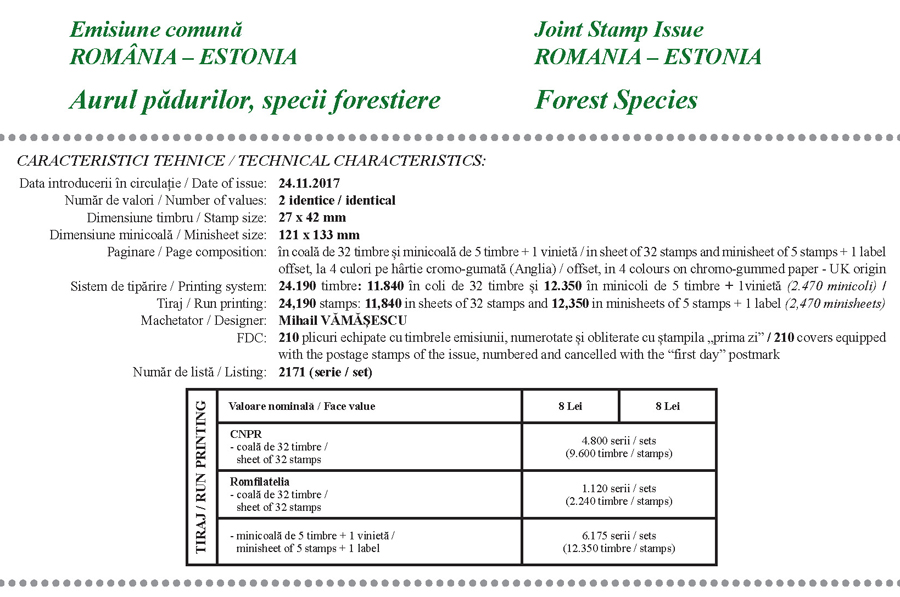