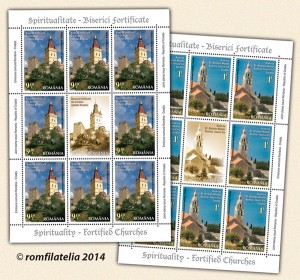 Both architectural ensembles have fulfilled over the centuries both the role of a church and a fortified city.

Mentioned for the first time in 1362 in a document belonging to the chancellery of Louis of Anjou, Cristian village takes pride in the Saxon church, known as the Evangelical Church in Cristian.

Declared a historical monument, the church in Cristian was built in the second half of the 13th century, in a period when early Gothic style, under the influence of the Cistercian Monastery in Carta, made its presence felt in the architecture of Transylvania. The old church, dedicated to St. Nicholas, was demolished in 1839. The present church was consecrated in 1841, and follows the model of the church hall equipped with large galleries. In 1903, the tower was heightened with a floor, equipped with a high roof with four spires at each corner and a platform on top.

The church’s interior impresses through its decorative elements: the altar with the statue of Jesus (1868) and the classical pulpit (1881), the giant chandelier with multilevel circles, the stained glass windows flanking the altar, the symbolic sculptures in stone and the 2-keyboard organ from 1842. The statue, made by sculptor Johann Bartel, is a copy of a statue carved in wood by the Danish Bertel Thorwaldsen.

The building works of the church started in the late 13th century, and continued until the 18th century; the establishment consisted of a fortification wall reinforced by 9 defense towers, surrounded by a moat. In the church tower, there are 4 steel bells cast in 1926.

After 1700, the church loses its defensive military role. In the first decades of the 19th century the enlargement of the church takes place, when Neoclassical elements specific to Transylvania are introduced.

The fortified St. Nicholas Church in Komiža, the island of Vis Island, also named Muster (Monasterium / Monastery), is the oldest representative building of its kind in Dalmatia and in the entire Croatia, dating back to the 13th century.

Fortified churches are at the same time architectural creations and a symbol of spirituality. The buildings were solid and well organised, being able to accommodate within their enclosure all the people from a settlement or island, and would resist lenghty sieges.

The church was built by the Benedictines who stopped here during their journey from the nearby Island of Biševo, the lintel bearing the inscription DCCCL (year 850) which is a testimony of their settlement on the Vis Island in those times. The first mention of the church in written dates from 1145.

In 1177 the church was consecrated by the Pope Alexander III. The church conserved some of its Romanesque features, but was visibly enlarged in the 16th and 17th centuries, when it was transformed from originally a single nave to a five-nave building. Also, in the 17th century, its defences were adapted to the Vauban system.

After a long period of Venetian rule, the village came under Austro-Hungarian rule, at the beginning of the 20th century reaching a population of 4,000 inhabitants.

With the fall of Monarchy, Komiža began to decay, and the people started to emigrate massively. After the Second World War, in communist Yugoslavia, the whole island of Vis became a military area, which prevented its development for several decades. With Croatia becoming independent, the prospects of tourism increased. Komiža numbers presently about 1,500 inhabitants.

St. Nicholas, the patron of the church, watches over travellers, seamen and fishermen. On his holiday, on December 6th, the inhabitants of Komiža bring on their arms a falkuša, a typical and special fishing vessel from Komiža, known and admired around the world, recently recognised as the Croatian contribution to the history of Mediterranean shipbuilding. This vessel is burned, a sacrifice made to the holy patron, a pawn of renewal, a sign of gratitude and a prayer for new life. The ancient ritual in front of the old church is one of the most touching moments which preserve a millennium old Mediterranean tradition.

Romfilatelia thanks Mr. Hermann Fabini, architect and Mr. George Avanu, photographer for the documentary support granted in the accomplishment of this postage stamp issue. 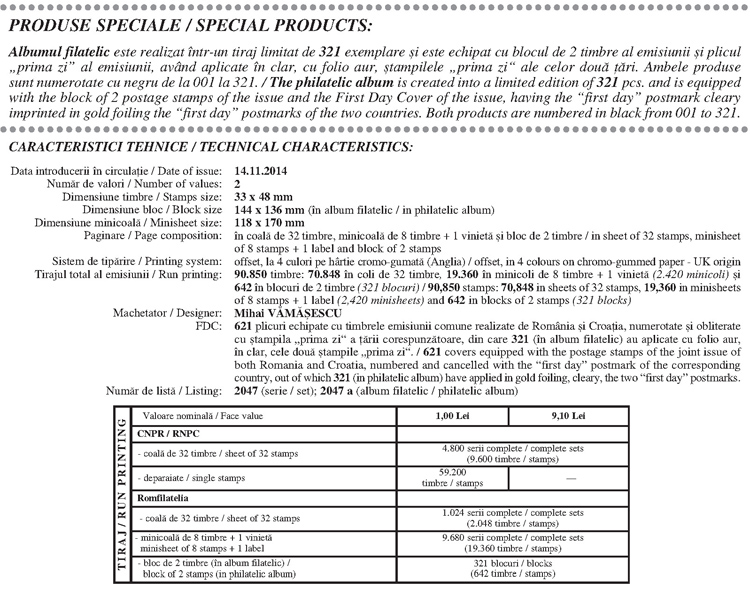