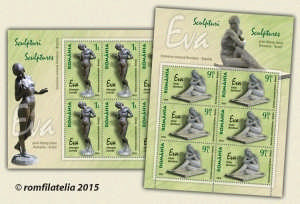 Romfilatelia introduces into circulation the joint stamp issue Romania – Brazil, dedicated to art and implicitly to sculpture, having as theme the female biblical character, Eve. On the two stamps of the issue are illustrated the two Eve works, belonging to Gheorghe Leonida and the Brazilian sculptor Victor Brecheret.
Romania established diplomatic relations with Brazil, at a legation level, on January 7th, 1928, being the first Romanian diplomatic representation in Latin America. On May 9th, 1974, the diplomatic relations were elevated to the rank of embassy. Were created over time, between Romania and Brazil, several cultural, spiritual, and economic bridges.
Latin type creativity and the rich local cultural background have made us receptive to the concepts of modernity in literature, theatre, film and Brazilian painting. We recall that an important role in the cultural modernization of Brazil was that of Tristan Tzara, co-founder of the Dadaist cultural movement, and sculptor Gheorghe Leonida.
Romanian sculptor Gheorghe Leonida helped create the imposing symbol of Rio de Janeiro, the Christ the Redeemer statue, having been hired to carve the statues face. Thus, we can say that the most famous artistic emblem of Brazil bears a Romanian touch.
Gheorghe Leonida was born in 1893, in Galati, in a family representative of the Romanian bourgeoisie, in the best sense of the word, as the author Michael Cantuniari said, a removed nephew of Leonida.
Gheorghe Leonida comes from a family that has given a series of Romanian cultural personalities. His brother was Dimitrie Leonida, the founder of the Technical Museum in Bucharest, which bears his name, and his sister, Eliza Leonida, was among the first women engineers in the world.
Leonida studied at the Conservatory of Arts in Bucharest, the sculpture section, continuing his artistic education, between 1922 and 1925, in Rome. In the same period he created two important sculptures, Eva and Reveil. The first, a superb bronze female figure holding an apple, illustrated on the stamp with the face value of lei 1.00, is part of the patrimony of the Romanian National Museum of Art and is displayed on the lawn in front of the former Royal Palace.
The young womans nude, rendered in a classicizing manner, was captured by the artist in a dynamic pose: the body arched to the right, hand raised to the face and the graceful head, with her hair in a bun, slightly bent over the apple she holds. The sculpture is remarkable for its fineness of execution, rigor of form composition and thoroughness in rendering details.
Victor Brecheret, born Vittorio Breheret, in 1894, in a small town close to Rome, was an Italian-Brazilian sculptor who immigrated at the age of 10 to Brazil together with his uncles family and thus adopted the name under which he would become known.
Brecherets works combine techniques of sculpture specific to his native countrys modernism (the physical characteristics of his human shapes) with visual motifs of Brazilian folk art. Many of his subjects and biblical characters or belong to classical mythology.
In 1921 his sculpture, Eve, was acquisitioned by the Săo Paulo Town Hall. Depicted on the postage stamp with the face value of lei 9.10, it shows the mother of mankind, the first woman from Brecherets point of view. The dynamic composition is due to the different orientation of the head and torso, resulting in a feline movement of the back, musculature taut. Its structure is complex and refined, imbued with strength and drama.

Romfilatelia thanks the National Art Museum for the documentary support granted in the creation of this postage stamp issue. 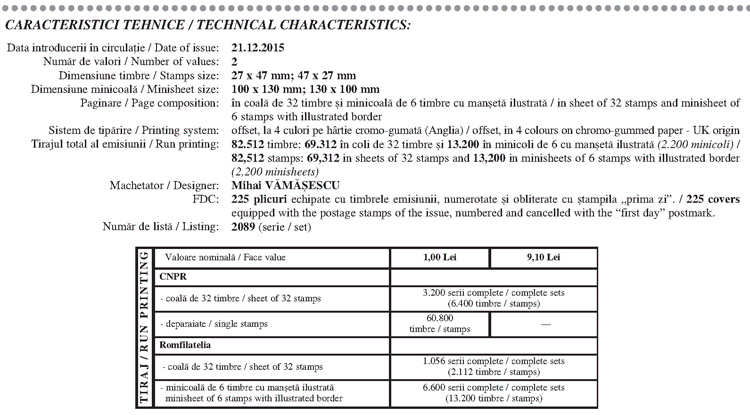