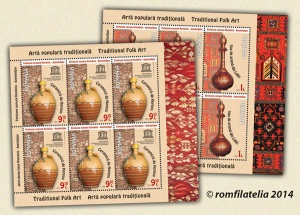 Romfilatelia introduces into circulation the joint stamp issue Romania-Azerbaijan, on the topic of Traditional Folk Art, dedicated to the valuable crafts of pottery and tapestry characteristic to both countries.

Folk art is not just the product of craft traditions preserved for centuries, but also the proof of the continuity of the national spirit incorporated into artistic elements passed down from generation to generation, throughout the world.

The two stamps of the philatelic issue illustrate the crafts of interior tapestry and traditional pottery by reproducing a Horezu ceramic bowl together with a traditional rug from the region of Oltenia, respectively an Azeri copper vessel from Lahic and a rug with local patterns.

Horezu ceramics bears over time the unique mark of archaic cultures and civilizations belonging to the Romanian land between the Danube and the Carpathians. The pottery handicraft follows a process transmitted for hundreds of years. A dominant symbol represented on the Horezu vessels is the rooster, nevertheless, other Romanian mythology-inspired figures such as stars, snakes, fish, the double helix, the belt, the sun, the ear of wheat or the tree of life are also represented.

There are also two predominant colours of the region: the Horezu red and yellow. The bowl reproduced on the postage stamp of the issue is made on the pottery wheel, from clay, with a handle, and is glazed. It is specific to the Horezu region, but it also presents influences from other ceramic centres of Valcea county. The motifs it illustrates are the wave, the colorful flowers, as well as simple ornaments on a brown brick background.

Horezu ceramics are among the Romanian elements listed on the UNESCO Intangible Cultural Heritage.

The traditional rug from the region of Oltenia, considered one of the most valuable types of Romanian tapestry, is valuable both through the Romanian vegetal motifs and the inventory of peasant and Brancovenesc art, whose meaning is related to the fundamental significance of Romanian spirituality. Anthropomorphic patterns and different apparently moving characters are illustrated as genuine elements of a tiny scene. The colours of the carpets (navy blue, burgundy, cyan, green, brown) are nuanced and refined. A wool and cotton rug weaving the “curved ornament” technique, characteristic to double sided carpets, is illustrated on a burgundy background with two frames and an exuberance of floral patters: the “stalk”, the “6-petal flower”, the “branch with flowers”, the “pearl”.

Lahic is a notable place in Azerbaijan, with its authentic handicrafts traditions, particularly the manual processing of copper. Moreover, the village’s carpets and rugs are also well known in Azerbaijan and the South Caucasus.

During the Medieval Period, Lahic became an important centre of craftsmen in Azerbaijan.

Copper work is the most important of the skills developed by Lahic craftsmen. Lahic is renowned for its production of arms and other copper items, decorated with carved and moulded ornaments.

One interesting fact is that the craftsmen working on copper engraved their signatures on it and therefore it is impossible to misappropriate these works of unique culture of Azerbaijan, many of which are kept in museums all over the world.

There are more than 40 types of copper processing handicrafts and the objects obtained include table plates, water bottles, dairy utensils and household items.

The patterns represented on the Azeri carpets made by craftsmen are unique through the value and uniqueness of the themes that are reproduced on them. These rugs are designed by the traditional representation of national subjects through the system of horizontal symmetry.

Although at the beginning the themes of hunting were predominant, by the second half of the 20thcentury they were replaced with the zoomorphic representation of different topics.

On the wool carpets, the influence of old flat carpets can be seen: it is called “Shadda” and its composition was based on the principle of horizontal symmetry and illustrates both animals and humans. Pairs of patterns illustrated horizontally on the carpets, such as “Atli-itli” (horse-dog), “itli-pisikli” (dog-cat), “Maralli-Jeyranli” (deer, gazelle) date back to the late 19th century.

Romfilatelia thanks the Aurelian Sacerdoteanu Valcea County Museum for the documentary and photographic support granted in the accomplishment of this postage stamp issue.
Issue date: 2014-12-18 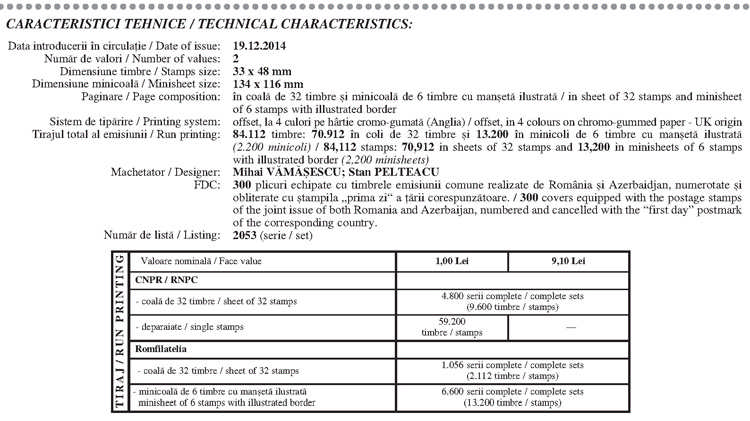