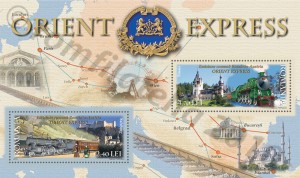 The Orient Express train made the connection between Paris and Constantinople, namely between the Occident and Orient, and was undoubtedly the most famous and romantic of all trains. “Today, at 5 minutes to five, in Targoviste station, the first Express train (the Orient Express) arrived with a 10 minutes delay. The Orient Express consists of an engine, a baggage car, a restaurant coach, a sleeping coach, a French mail car and the conductor’s car. The train’s staff has different nationalities.” (“Romanul” newspaper, May 27th – 28th /June 8th – 9th 1883)

The Orient Express train made the connection between Paris and Constantinople, namely between the Occident and Orient, and was undoubtedly the most famous and romantic of all trains. Though it belongs today only to the nostalgic tourism – by the trains “Nostalgia Istanbul – Orient Express” (N.I.O.E.) and “Venice Simplon – Orient Express” (V.S.O.E.) which ran and continue running through Romania – its echoes have never died away. Writers, musicians, painters and cinematographers got inspired from the history of this famous train and contributed to the creation of its legend.

This train began operating in June 5th 1883, under the name of Le Train d’Orient or Express d’Orient and its first route, Paris (East Station) – Nancy – Strasbourg – Stuttgart – Munich – Salzburg – Vienna – Bratislava – Budapest – Jimbolia – Timisoara – Caransebes – Varciorova – Craiova – Pitesti – Bucharest – Giurgiu – Smarda, 2,638 kilometers long, lasted for 59 hours and 15 minutes. The first Orient Express left Giurgiu for Paris on June 8th 1883, at 13:30, arriving into the capital city at 15:00 and, after a 15 minutes halt, it left on its route to Paris. On this occasion, the Postal and Telegraph Service in Giurgiu saluted their Parisian fellows by a telegram with the following Latin text: “Sequanam Danubius amice salutat.” (“Danubius friendly salutes Seine”) The Parisian Postal and Telegraph Service promptly answered, also in Latin, to the greetings of the people from Giurgiu: “Gratae Danubii fratris salutationi respondet Sequana soror.” (“Sister Seine thanks brother Danubius for his greetings.”)

The official inauguration of the Orient Express train took place on October 4th 1883; on this occasion, they introduced sleeping coaches with bogies, the first of this kind in Europe. The new cars of Orient Express train had 4 axles, were 17.5 meters long, they were made of Teak wood and had crystal glasses. Heated by steam and illuminated by gas, they were “as comfortable as a luxury suite in Paris”. Between two-axle baggage cars, they introduced two four-axle sleeping coaches, having a 20 seats capacity, and also a four-axle restaurant car. The restaurant car (CIWL 151D) was draped in tapestries from the famous Gobelin manufactories, as well as in Cordoba leather and Genovese velvet; it consisted of a large saloon, a smoking lounge with a library, a boudoir, an office and a kitchen.

At the invitation of Carol I to visit his new summer residence, the Peles Castle in Sinaia, the Orient Express train, with 40 European high officials on board, ran, in October 7th 1883, on the route Bucharest – Ploiesti – Sinaia and back.

Since 1st of June 1889, a second Orient Express train made a direct link between Paris and Constantinople, through a new route via Serbia and Bulgaria, the 2,504 kilometers long course lasting for 67 hours and
35 minutes.

After the commissioning of the Danube bridges, in 1895, the route of the Orient Express train through Romania was extended up to Constanta Harbor on April 19th /May 1st 1896.

The last Orient Express train of the C.I.W.L.T. Company left Paris for Istanbul on May 19th 1977 on the route Paris – Milan – Venice – Zagreb – Belgrade – Sofia – Istanbul (Sirkeci), the entire journey lasting for about 56 hours.

Illustrating a highly appreciated collection topic, Romfilatelia introduces into circulation the joint stamp issue entitled “Orient Express”, alongside with Austria, in order to mark the special cultural relationships between Bucharest and Vienna, built over time.

The stamp with the face value of 4.70 Lei represents the Orient Express train in May 1921, at Sinaia station. It had been pulled by a Pacific engine, type 2C1-h4, which belonged to the Bucharest Travelers Depot and was used on the route Bucharest North – Ploiesti – Sinaia – Brasov and back.

The stamp with the face value of 2.40 Lei represents the Orient Express train, in 1909, at Salzburg station, consisted of a four-axle restaurant car and pulled by a compound engine, type 2B-n2v from the Austrian series K.k.St.B. 206.01-206.70 belonging to Depot Wien II and which was used to pull the Orient Express train on the route Salzburg – Vienna and back.

We kindly thank Eng. Ilie Popescu from S.N.T.F.C. – “CFR CALATORI” S.A. (Ministry of Transports) for his support granted in the accomplishment of this joint stamp issue. 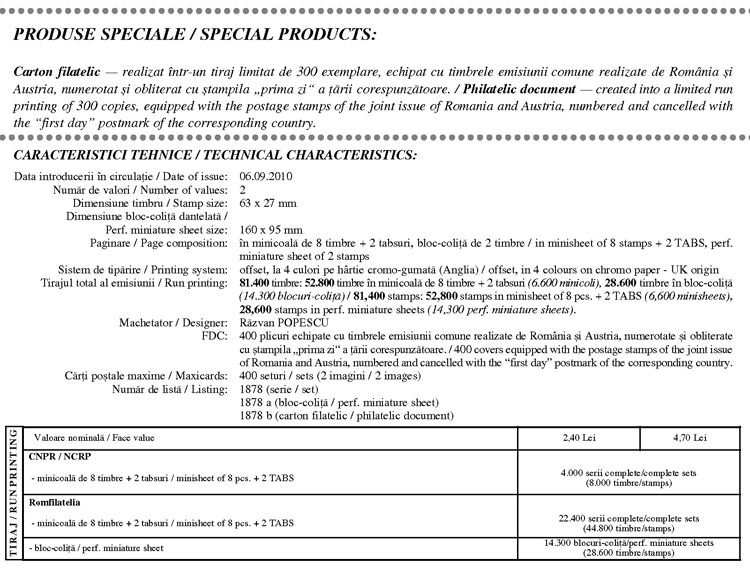