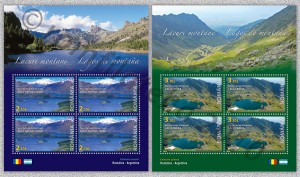 Alongside the common thematic of the stamps issue, a recurrent element defining the approach between the two nations consists of the personality of Julius Popper, a Romanian explorer and cartographer. He organized expeditions in Argentina, in Tierra del Fuego (Land of Fire), at the southern tip of Patagonia and Isla Grande (Great Island).

For almost ten years, he explored Tierra del Fuego giving many Romanian names to the places he discovered: Rio Ureche, Rio Rosetti, Mountain Lahovary, Carmen Sylva Peaks, Cordiliera Carlos I of Romania, Brosteni Lake. At the same time, Popper invented “the device for collecting gold from sea water” or “the gold washing machine”, an invention patented in many countries. He issued his own coins (of 1 gram and 5 gram gold), he set up postal offices, he issued a 10 centavos stamp with a capital “P” from Popper – a rarity in the philatelic world – all these on the Argentinian territory.

Julius Popper, the “king” of Tierra del Fuego, was simbolically called “the Romanian conquistador of Patagonia” by the Argentinian people.

To illustrate the joint stamp issue of 2010, the two countries have chosen Balea Lake in Romania and Nahuel Huapi Lake in Argentina.

Balea Lake is situated in the Fagaras Mountains, belonging to the Southern Carpathians. Located at an altitude of 2,034 meters, the lake is protected by a glacial boundary. It is 353 meters long and 217 meters wide.

With a depth of 11 meters and a very low temperature, Balea Lake is placed in the vicinity of the Transfagarasan road, the longest Romanian alpine paved road, reaching more than 2,000 meters in altitude.

Nahuel Huapi Lake is situated at 750 meters above sea level and its surface encompasses 557 square kilometers. The shore´s length measures more than
350 kilometers and the maximum depth is 480 meters.

The lake is located within the Nahuel Huapi National Park, positioned at the foothills of the Patagonian Andes. Founded in 1934, it is the oldest National Park in Argentina. The park covers approximately 7,050 square kilometers, stretching near the Chilean border.

Romfilatelia kindly thanks Mr. Victor Bortaş (photographer) for the images used in the illustration of this joint stamp issue. 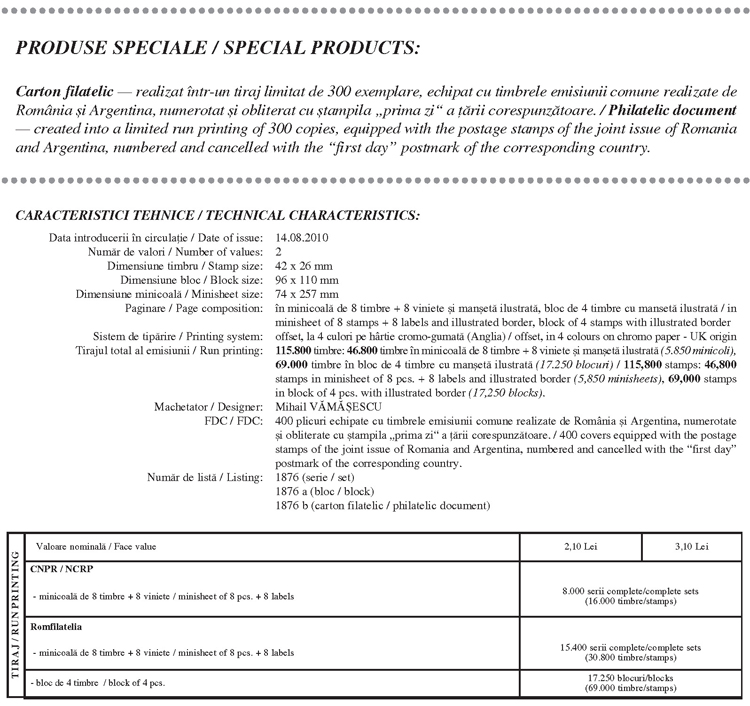