In 1048, a hospital for pilgrims coming to the Holy Land was established in Jerusalem. This hospital was managed by the community of the Hospitallers of St. John, later to become the Sovereign Military Hospitaller Order of St. John of Jerusalem, of Rhodes and of Malta.

The Community of Hospitallers was recognized as a religious order of the Catholic Church by Pope Paschal II in 1113, and by papal bull the Order was given the right to elect its own leaders without interference from other lay or religious authorities. Members of the Order took vows of poverty, chastity and obedience and dedicated themselves to helping the needy and sick.

Later on, this Order also became “military”, conceived as a means of protection and defence of the sick, pilgrims, as well as the Christian territories of the Holy Land.

For almost a millennium, the Order was close to the poors, the sick persons and the refugees through its charitable works, using means specific to those times. Due to the recognition of its merits, the Order continues to manifest itself today as a sovereign presence and is recognised as a subject of international law. The Order conducts diplomatic relations with 112 countries and the European Union, holds the status of permanent observer to the United Nations and has concluded international cooperation agreements with more than 50 countries.

At the same time, through its local associations and networks of volunteers, the Order is present in 120 countries around the world to put its charitable mission into practice.

The first relations between the Romanian people and the Maltese Order date back to the 13th century, when, by means of the Diploma of the Johannite Knights, the King of Hungary, Bela IV, invited them to settle in Banat. Furthermore, the historians consider them to be the founders of the first hospital establishment on the current Romanian territory, in Oradea, long before the one in Sibiu, whose documentary evidence dates back to 1292.

In 1932, 90 years ago, the groundwork was laid for the establishment of bilateral diplomatic relations at legation level, and on January 27, 1933, the Order’s first diplomatic representative, Count Michel de Pierredon, presented his letters of accreditation in Bucharest.

Relations ceased in 1948, without, however, being explicitly denounced by the parties, and in 1962 the “Romanian Association of Members of the Sovereign Military Order of Malta” was established, which would function in exile until 1991, when bilateral relations were resumed, this time being raised to the rank of embassy.

On the occasion of the celebration of nine decades of diplomatic relations between Romania and the Sovereign Military Order of Malta, Romfilatelia introduces in circulation on Friday, September 16 of this year, the joint stamp issue dedicated to this event.

The subject chosen to illustrate the layouts of the joint stamp issue was related to the collaboration in the field of humanitarian assistance and the numerous projects carried out by the Sovereign Order in our country in the field of medical assistance, relief in disasters, support for the disabled, the elderly, young people, Roma children and other categories of vulnerable people. The Sovereign Order of Malta, through the Maltese Relief Service in Romania and the Romanian Association of the Order of Malta, has also provided concrete support to Romania in the context of the COVID-19 pandemic.

On the stamp with a face value of Lei 10, a joint action of the Maltese Relief Service in Romania and the Romanian fire fighters during an emergency snow removal intervention is depicted.

On the stamp with a face value of Lei 16, volunteers of the Maltese Relief Service in Romania are presented during providing assistance to Ukrainian refugees at the Romanian border.

Romfilatelia thanks the representatives of the Postal Administration of the Sovereign Military Order of Malta, the Embassy of Romania to the Holy See and to the Sovereign Order of Malta in Romania for the documentary and photographic support provided to the development of this joint issue.

The philatelic issue will be available starting Friday, 15th of September, in Romfilatelia’s shops network in Bucharest, Bacau, Brasov, Cluj-Napoca, Iasi and Timisoara and online on https://romfilatelia.ro/store/. 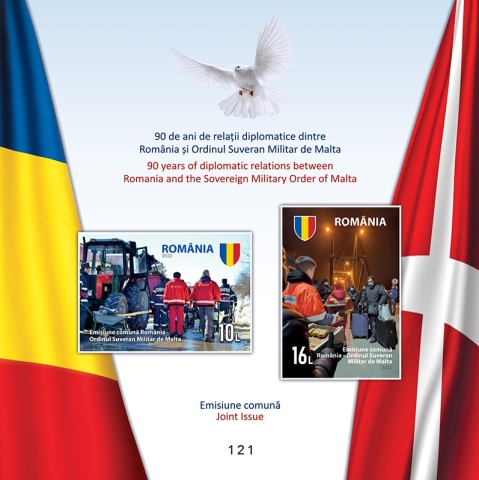 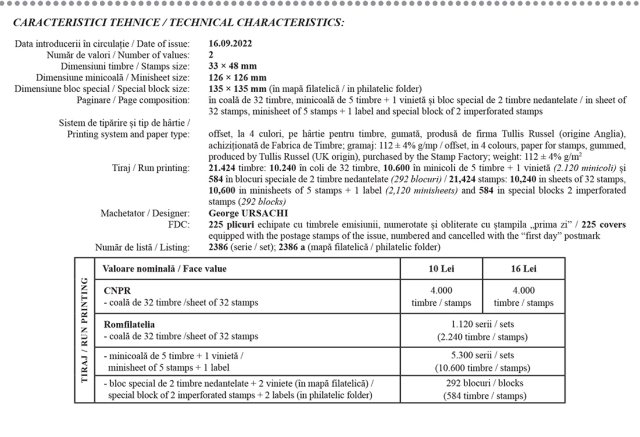 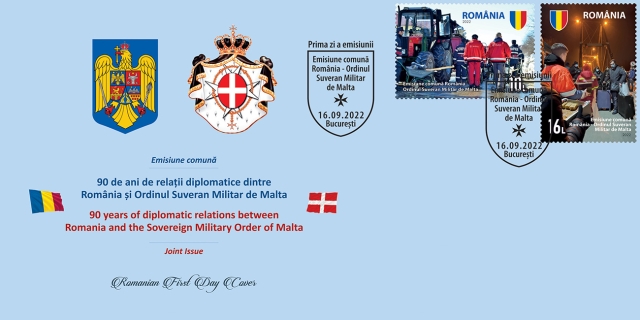 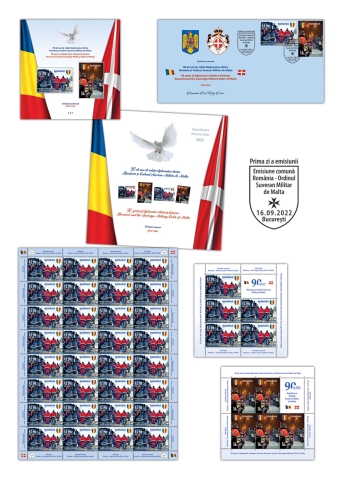 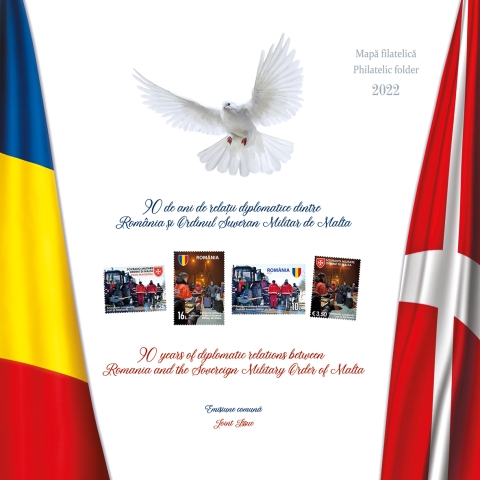 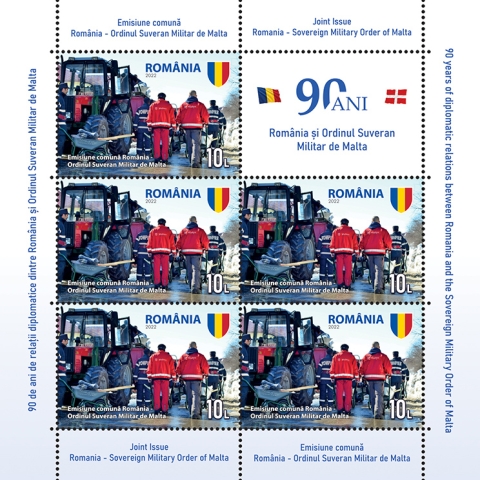 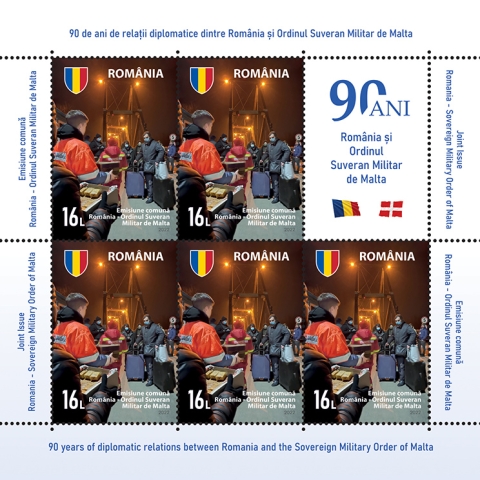 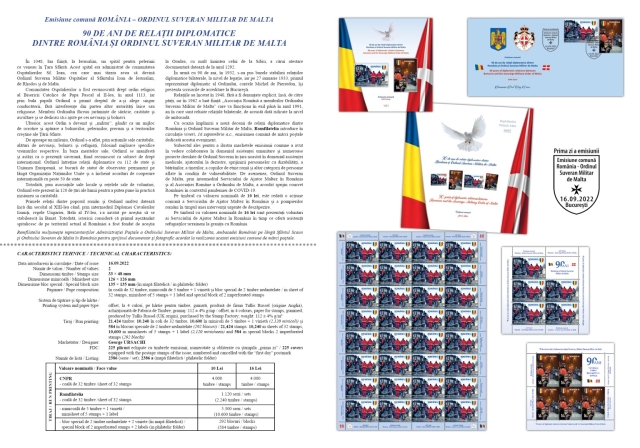 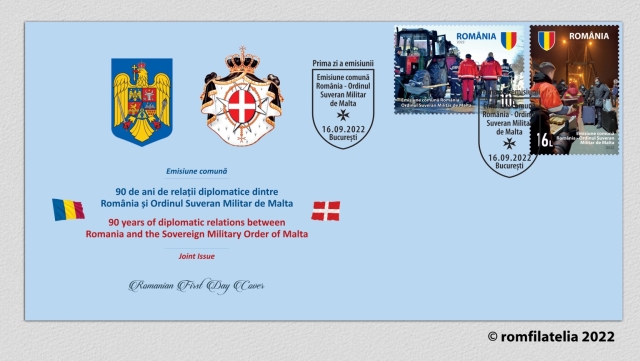 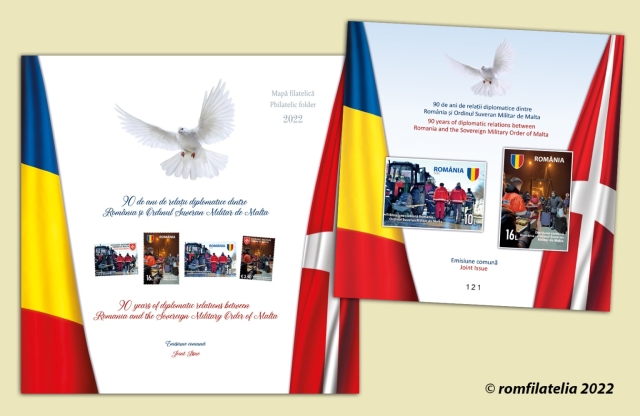 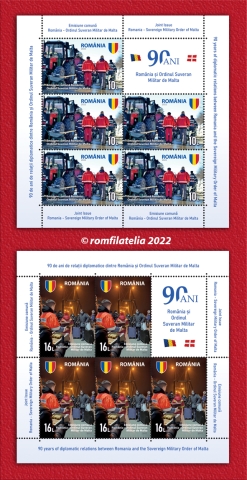 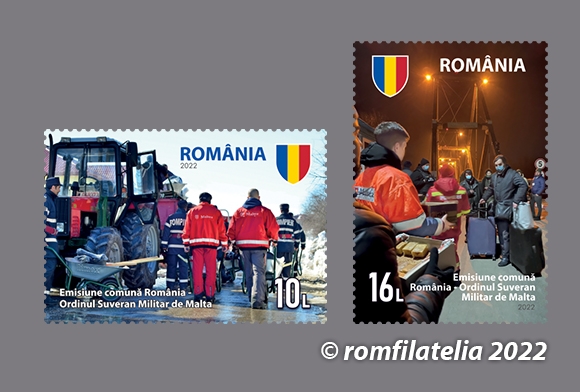 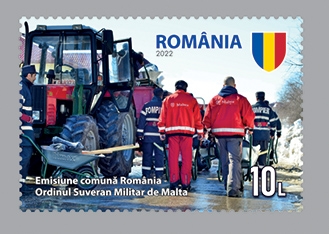 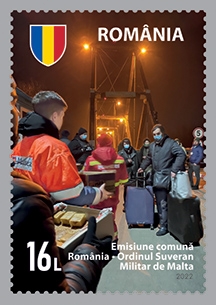