In 2022, Romania celebrates 156 years of membership in the International Telecommunication Union, our country becoming a member state of the ITU in 1866.

Romania has actively participated in the ITU over the years, its representatives receiving numerous times endorsements from the Member States to exercise important positions within the Plenipotentiary Conferences and World Conferences or in the study groups within the ITU structure. At the same time, during the ITU Plenipotentiary Conference 2018, Romania was elected for the seventh consecutive term as a member of the ITU Council, in its capacity as a representative of Region C (Eastern Europe and North Asia).

All these activities have brought a series of benefits over time, a perpetual proactive and professional image in the working environment of the International Telecommunication Union and, last but not least, visibility for Romania. Thus, in this context, Romania’s hosting of the 21st edition of the ITU Plenipotentiary Conference was deemed appropriate, considering the importance of the activity carried out by ITU for the electronic communications and information society sector in Romania, as well as the involvement of Romanian specialists in the activity of this specialized agency of the UN system.

To mark an event of major importance for the IT&C sector worldwide, which Romania will organize in Bucharest, at the Palace of the Parliament, Romfilatelia will introduce into circulation the postage stamps issue ITU Plenipotentiary Conference, 2022 on Monday, September 26th, the conference start date.

On the stamp of the issue with the face value of Lei 10.00 is rendered the logo of the ITU Plenipotentiary Conference, and a night image of the Romanian capital, Bucharest, the venue of the event, is illustrated on the background of the minisheet.

The International Telecommunication Union (ITU) is the specialized agency of the United Nations for communications and information technology, established in 1865, thus being the oldest of the UN agencies.

In this context, the organization of an event of the magnitude of PP-22 is not a mere coincidence, but signifies recognition and appreciation at the international level both for the involvement of Romanian specialists in ITU activities and the level of development of the electronic communications sector in our country, during a period in which this field proves to be crucial for overcoming the Covid-19 pandemic and reaching new thresholds of economic and social development.

The Conference logo, illustrated on the postage stamp of the issue, was designed following ANCOM’s proposals, being presented, officially, during the Consultation of the members of the Council of the International Telecommunications Union (VCC-1) in June 2021 and represents a combination of famous traditional Romanian motifs with the main mission of the Conference – unity and consensus among member states.

On the First Day Cover of the issue, a night panoramic image of the city of Bucharest is illustrated and both the logos of the Conference and the logos of institutions directly involved in the organization of the event are inserted.

Romfilatelia thanks the International Telecommunications Union, the Romanian Government, the Ministry of Research, Innovation and Digitization, as well as the ANCOM, for the documentary support given to the development of this postage stamps issue.

The philatelic issue will be available starting Monday, 26th of September, in Romfilatelia’s shops network in Bucharest, Bacau, Brasov, Cluj-Napoca, Iasi and Timisoara and online on https://romfilatelia.ro/store/. 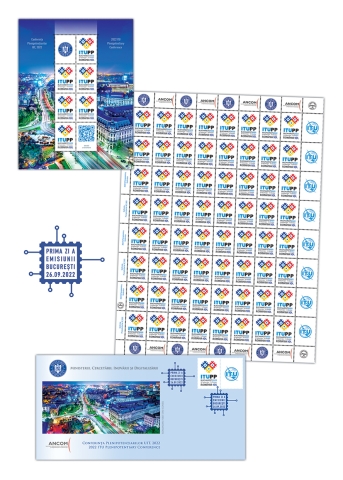 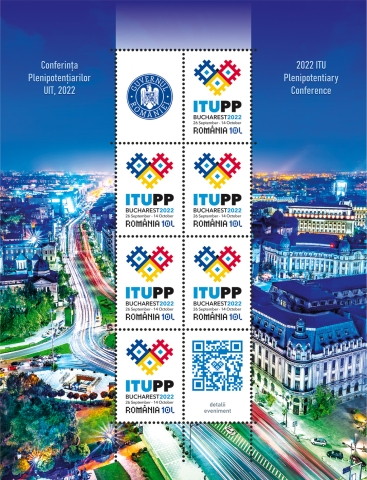 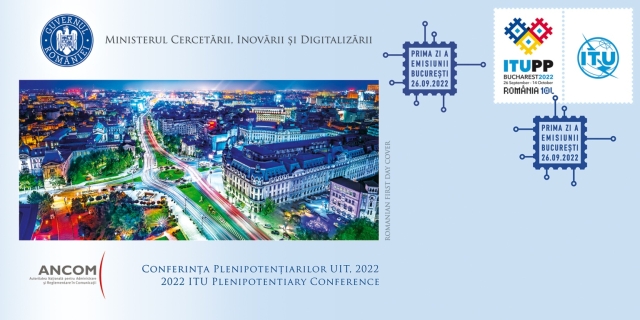 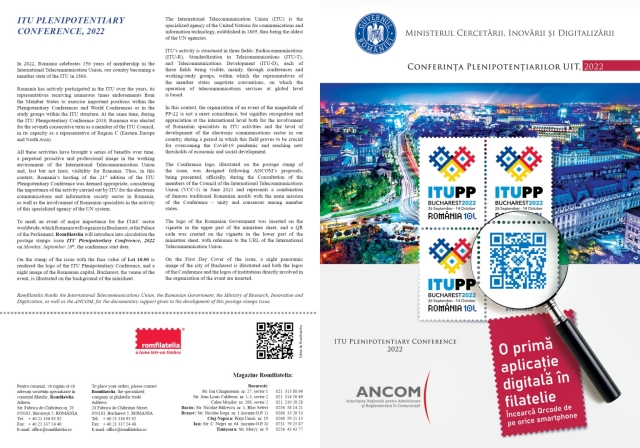 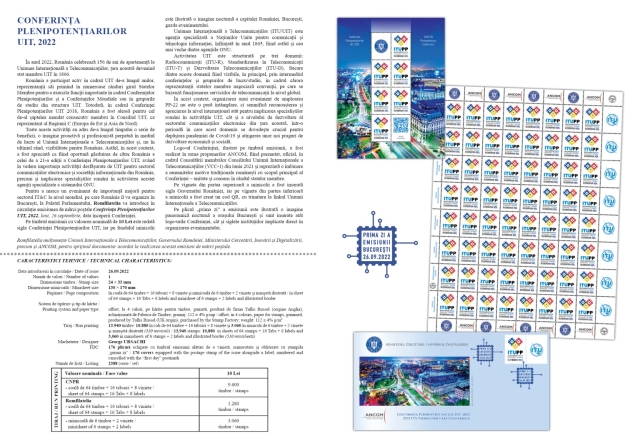 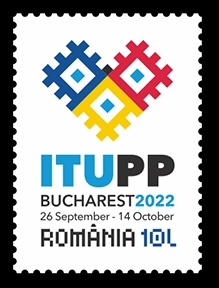