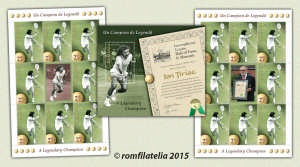 Sport is the bodys prayer.

Romfilatelia honors the star of Romanian sport by creating the postage stamps issue Ion Tiriac, A Legendary Champion.
Ion Tiriac, the tennis champion and one of the most important promoters of Romanian sport both in our country and abroad, debuted in the world of sports as an ice hockey player. Between 1958 and 1964 he was a member of Romanias ice hockey team, which participated in the Winter Olympics and the World Championships in Innsbruck.
1970 is the moment of his consecration in world tennis, when together with Ilie Nastase he won the Roland Garros tournament. For a decade, the two have often played doubles tennis, dominating the worlds competitions. Besides Nastase he has partnered with Bob Hewitt, Juan Gisbert, Jimmy Connors, Mike Estep, Adriano Panatta, Manuel Orantes, Guillermo Vilas, Virginia Ruzici.
Throughout his professional career as a tennis player Ion Tiriac has won over 40 titles in renowned international competitions, in which he raised the art of tennis at the highest levels, both technically and in terms of the public spectacle. Between 1959 and 1978 Ion Tiriac played over 150 matches in the Davis Cup, disputing three finals against the US team in 1969, 1970 and 1972, all three starring partner Ilie Nastase.
His passion for the white sport pushed him beyond the role of player, thusly after his withdrawal from competition he continued to engage in the sporting life in the role of coach, manager, consultant or organizer and promoter of tennis tournaments. Among the successful athletes he worked with are Ilie Nastase, Guillermo Vilas, Henri Lecomte, Marat Safina, Dinara Safina, Yannick Noah, Goran Ivanisevic or Boris Becker. In addition he owns exclusively or in partnership the right to the tennis tournaments: Mutua Madrid Open, BRD Nastase Tiriac Trophy and Geneva Open.
Between 1998 – 2004, Ion Tiriac has served as President of the Romanian Olympic Committee, during which Romania won 26 medals at the Sydney Olympics in 2000 and 19 medals in Athens 2004.
As a sign of appreciation for his contribution to the development of the sporting field, in March 2003, Ion Tiriac received from the West University of Timisoara the Doctor Honoris Causa disctinction. In 2009, the House of Champions Foundation awarded him, for his outstanding achievements in sport, the Legendary Champions trophy and in 2013 Ion Tiriac received the highest award in the tennis world from the International Tennis Hall of Fame & Museum, an organization that honors the most valuable champions and leaders of the sport. The president of the International Tennis Hall of Fame and Museum, American Stan Smith, motivated the inclusion of Ion Tiriac in the tennis players gallery of personalities because of his contribution in the development of the white sport – As a result of his fabulous contributions to the development of tennis and his multiple qualities, a group of tennis historians, experts and members of the Hall of Fame nominated Ion Tiriac to receive this distinction.
In 2014, the Senate of the National University of Physical Education and Sport in Bucharest granted Ion Tiriac the high title of Doctor Honoris Causa, as a sign of public recognition of his exceptional merits and the major contribution he has made to the development of sports in Romania.
The success that followed him throughout his sporting career transferred itself onto his status as a businessman. He is also a motoring enthusiast, owning an impressive collection of automobiles more than half of which are vintage cars.
The stamp of the issue and that of the souvenir sheet reproduce images from October 1972, the Davis Cup final in Bucharest.
The name of the great sportsman, Ion Tiriac, is imprimed in gold foiling on the margin of the souvenir sheet. 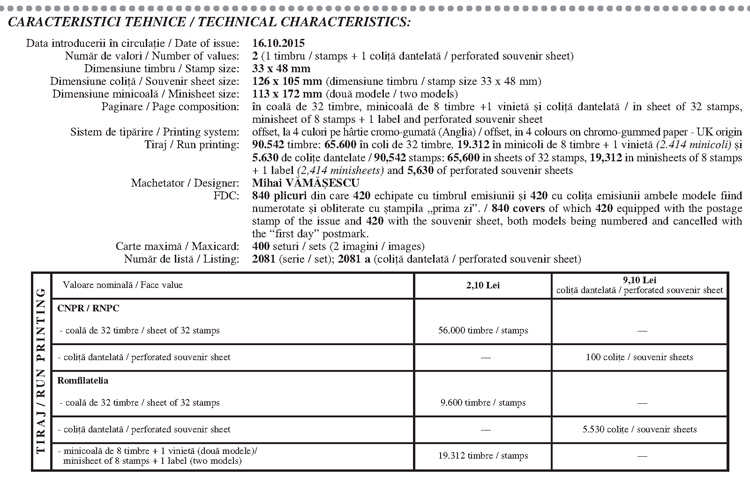