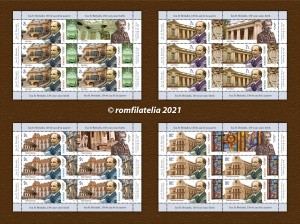 Romfilatelia introduces into circulation on Friday, July 2nd this year, the postage stamps issue Ion D. Berindei, 150 years since birth, dedicated to one of the great architects of Romania, author of some buildings that still represent true ornaments of the built heritage of our country.

Son of the architect Dimitrie Berindey (1831-1884), Ion D. Berindei (Berindey), 1871-1928, graduated from the School of Fine Arts in Paris in 1897. Returning to Romania, he designed, during his 30-year career, an impressive number of monumental buildings, for public use or private residences. In Bucharest, examples of this kind are: Cantacuzino Palace, Assan House, the Palace of the Journalists’ Union (where the Very Small Theatre is located), “Admiral Vasile Urseanu” Astronomical Observatory, Toma Stelian House, Regina Elisabeta Asylum (today “Ana Aslan” Institute of Geriatrics and Gerontology). He also built the Cantacuzino Palace in Floresti (Prahova County) and the sumptuous Palace of Culture in Iasi. Of the over 60 works made by Ion D. Berindei, 29 are historical monuments, which proves that the architecture he created still enjoys appreciation nowadays, being on a prominent place in the history of modern architecture in Romania. His creation combines elements of Beaux-Arts Eclecticism, Romanticism, neo-Rococo, with neo-Romanian tendencies and modern elements of 1900 conception, both in the overall composition and in solving the richly represented decoration.

His sudden death in 1928, at the age of only 57, aroused immense regret for all that he could have done if fate had given him more years of life, but also an immense admiration for what he had succeeded in doing. The journalist and memorialist Constantin Bacalbașa wrote: “Ion Berindeiu, the «builder» whom death snatched away the day before yesterday with a lightning strike, was one of the superior artistic souls, the architect who in his buildings superimposed not only bricks and plaster, but also the builder’s genius of great aesthetics. […] Berindeiu was the architect who left behind him, not only high walls, but architectural ornaments, worthy of any great civilized city”.

On the stamps of the issue are illustrated four representative works of Ion. D. Berindei in the Romanian capital.

On the stamp with the face value of Lei 2 is represented the Assan House, today the House of Scientists (9, Lahovari Square). The building was built in 1904, by Ion D. Berindei for George G. Assan (son of the industrialist George Assan, brother of Bazil G. Assan, industrialist, president of the Chamber of Commerce, deputy from the National Party Liberal). The building entered the patrimony of the Romanian Academy and in 1945 it became the House of Scientists.

Stylistically, the building belongs to the typology of the Cantacuzino palace, the Academism of the French school adding Art Nouveau elements here as well. The entrance detaches in volume from the body of the house, being marked by the higher roof next to it and by a glass and metal canopy, in the shape of a shell. The railings of the balconies and the stairs to the garden, as well as the fence towards the square are made of wrought iron, and their shapes and the metallic structure of the glass canopy belong to the Art Nouveau style.

On the stamp with the face value of Lei 7 is represented Titulescu House in Bucharest, today the headquarters of the Titulescu European Foundation (47, Kiseleff Road). The house was built for the great Romanian diplomat Nicolae Titulescu, who lived here between 1912 and 1937.

The architecture is Eclectic, with Neoclassical elements (triangular pediment) and Art Nouveau. A significant element is the monumental loggia, facing the street. Accessible both from the inside, through the vestibule, and from the outside, through the garden in front of the house, the loggia, with its double colonnade, reminds of the Cantacuzino Palace in Floresti and the French Petit Trianon palace.

The stamp with the face value of Lei 9 shows the Cantacuzino Palace in Bucharest, today the headquarters of “George Enescu” National Museum (141, Calea Victoriei).

Ion D. Berindei built this imposing building in the years 1901-1906, for Gheorghe Grigore Cantacuzino, nicknamed “Nababul” („The Nabob”), leader of the Conservative Party, former prime minister. The entrance bears above the princely coat of arms of the Cantacuzinos, is adorned with a glass and wrought iron canopy and guarded by two stone lions. Berindei’s collaboration with some famous artists of the time and suppliers of luxury goods resulted in an interior decoration of great richness and elegance: mural paintings made by G. D. Mirea, Nicolae Vermont, Costin Petrescu and Arthur Verona; bronzes and statuettes made by the sculptor Storck, exterior and interior sculptural ornaments by Emil Wilhelm von Becker, to which are added tapestries, chandeliers, stained glass, lamps, furniture in the Louis XIV and Louis XVI style, which come from the Krieger and Mercier House in Paris.

After the Nabob’s death in 1913, the palace came into the possession of his son, Mihail G. Cantacuzino, and his wife, Maria (Maruca). Become a widow, she remarried to George Enescu in 1937. After his death (1955), his wife donated the building to the Romanian state, in order to establish a museum dedicated to the composer’s memory. Since 2007, the Cantacuzino Palace has been included on the European Heritage List.

On the stamp with the face value of Lei 10.50 is represented the “Admiral Vasile Urseanu” Astronomical Observatory (21, Lascar Catargiu Boulevard), the only astronomical observatory in the capital open to the public, being today under the administration of the Museum of Bucharest. The idea of an Astronomical Observatory took shape in 1908, when Admiral Vasile Urseanu (who had distinguished himself in the War of Independence and contributed to the modernization of the Romanian navy), passionate about astronomy, was elected president of the Romanian Astronomical Society; he built his house provided with a dome intended for astronomical observations. After the admiral’s death, his widow donated the building of the municipality of Bucharest City.

After the Second World War, the observatory was reopened to the public in May 1950. Provided with modernized equipment, the Observatory has as its activity both the popularization of astronomy (offering those interested the opportunity to observe the sky through telescopes), as well as conducting observations and research by amateur astronomers. In 2017, an attractive and modern permanent, exhibition was inaugurated, called “Discovering the Universe together”.

On the First Day Cover of the issue, a collage of images was designed: a detail of the facade of the Cantacuzino Palace in Bucharest, a vintage photograph depicting the architect Ion. D. Berindei in the middle of a group of collaborators, the Palace of Culture in Iasi and the Hippodrome in Baneasa.

The Palace of Culture in Iasi is a true edifice-symbol of the city. In its appearance there is a combination of styles: neo-Gothic, Romantic and neo-Baroque. It has 298 rooms, with an area of approximately 36,000 m2. Built between 1906 and 1925, on the foundations of the former Princely Court of Moldavia, the building initially functioned as an Administrative and Justice Palace. Today it is the headquarters of the “Moldova” National Museum Complex.

The Hippodrome in Baneasa was a construction designed after the model of some French racecourses and erected between 1905 and 1909. It was the property of the Romanian Jockey Club and occupied an area of 62 ha in the north of Bucharest. In its time, it was considered one of the most beautiful racecourses in Europe.

The tribune pavilion was provided with a canopy supported by metal trusses that protruded 10 meters in the console, so without support pillars, so as not to impede visibility. It was a bold constructive solution for the time. The architect’s grandson, the writer Mircea I. Berindei, narrated: “The resistance of this canopy was verified, according to reports, by loading it with a regiment of soldiers led by the designer himself, namely the architect Ion D. Berindey”.

The construction no longer exists; it was demolished by the communist authorities, in 1952 and 1960, on this place being built Casa Scânteii („House of the Spark” – today the House of the Free Press) and the Exhibition Complex (ROMEXPO).

Romfilatelia thanks the Romanian Academy, the Library of the Romanian Academy, University Lecturer Mrs. Sidonia Teodorescu, Ph.D., the National Institute of Heritage and “George Enescu” National Museum, the Museum of Bucharest, Titulescu European Foundation, for the documentary and photographic support offered for the development of this stamp issue. 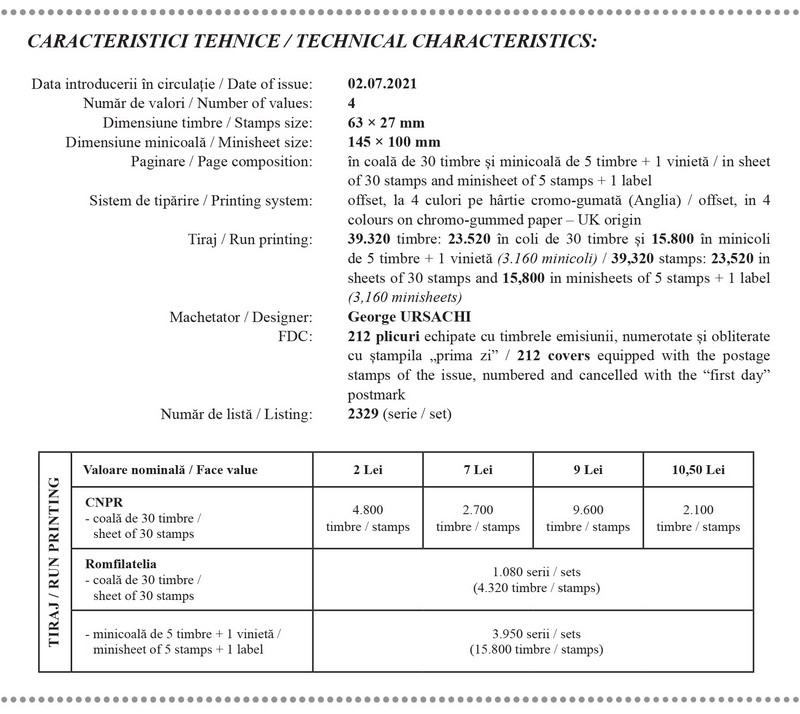