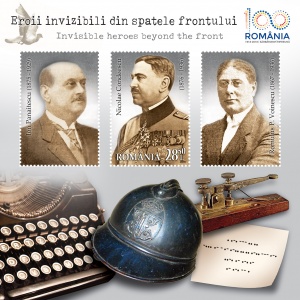 However, the Directorate of Police and General Security has carried out counterinformation actions aimed to prevent foreign espionage from acting on the Romanian territory and, if necessary, intoxicating them with fake news. Consolidation activities were carried out in the field of information and counterinformation, in the sense of efficiency. Clear procedures have been formulated on how to conduct information and manipulation of information, the duties of staff having informative missions, the establishment of aviation recognition missions and how to conduct flying research, the coordination of secret agents’ activities, etc.

The  postage stamp issue Invisible heroes beyond the front will be available on Friday, December 14th 2018, in Romfilatelia’ own shops network in Bucharest, Bacau, Brasov, Cluj-Napoca, Iasi and Timisoara and online on https://romfilatelia.ro/store/. The postage stamp issue is completed by the First Day Cover, as page composition in perforated souvenir sheet + 2 labels.