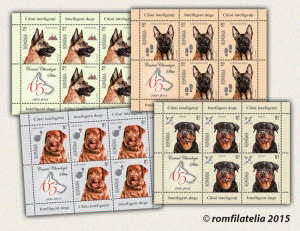 Many consider dogs as mans best friend and certainly the unique relationship we have with these animals deserves a special status.

The origins of dogs and their miraculous transformation from wolf to dog are two subjects that have been studied with great interest by scientists. New archaeological data shows that our relationship began during the ice age, about 30,000 years ago and not, as originally hypothesized, along with the discovery of agriculture.

Since then our relationship has only become a closer one, people finding increasingly more opportunities in which the sharp senses, the canine intelligence and loyalty bring a benefit to our community.

Romfilatelia introduces into circulation the postage stamps issue Intelligent dogs to bring to the forefront the relationship with mans best friend and to mark 65 years since the establishment of the Cynological Centre Sibiu, which was founded in 1950 and is an integral part of the education network of the Ministry of Interior, dedicated to the fulfillment of the whole potential of the relationship between man and his four-legged friend. The four dog breeds which are illustrated on the stamps are currently used in the role of protection and watchdogs, for processing traces of odor, detection of explosives or illegal substances as well as the aid of rescue and relief teams.

At the beginning of World War I, the German Shepherd, pictured on the stamp with the face value of lei 2.40, was already popular throughout Germany. Since then, the breed has developed continuously, today being used for most categories of service. This fact has contributed to the strengthening of its prestige.

It meets all the qualities necessary for a service, utility or companion dog. Psychic equilibrium, characterized by increased mobility, it is suitable for any type of training, from attack-defense to the detection of narcotics, explosive substances, people trapped under rubble, search for offenders or accompanying the disabled. Nerves of steel, attention, frankness, obedience, alertness, mobility, incorruptible fidelity, courage and combativeness are dominant attributes of a real German Shepherd.

Considered to be descended either from shepherd dogs from Central Europe, either a cross between the local dogs with the English Deerhound, the Belgian Shepherd was standardized in the late 19th century, when it managed to be recognized as a single race with four varieties: Groenendael, Laekenois, Malinois and Tervueren. Of the four, the Belgian Shepherd Malinois type depicted on the stamp with the face value of lei 5.00 best fits the requirements regarding a good protection or assistance dog, being known for a long time as a large size attack and defense dog, but sleek and agile. Being a resourceful dog is used with very good results lately by many European police and -gendarmerie for most categories of specific service.

The Labrador retriever depicted on the stamp with the face value of lei 8.10, is one of the most popular dogs breeds in the world and originated in Newfoundland Island Canada, where fishermen brought a few dogs to England in the early 19th century (1820-1830), some aristocrats deciding to raise this breed to create a pointer dog.

It was noted, primarily due to highly developed smell and that he felt very well in water, qualities that propelled him to the top category of hunting retriever dogs. But it turned out to meet the requirements imposed by the activity and for detecting explosives and narcotics, and lately has been the dog of choice for these specialties, but is also known as an excellent dog for companionship and leading the blind.

As one of the most widespread and popular breeds in the world, the Rottweiler, depicted on the stamp with the face value of lei 9.10, is considered among the best dogs for protection.

The breed has its roots in antiquity, originating from combat dogs and those used for herding which accompanied the Roman armies. The breed then appeared in Germany, where it took up residence in the town of Rottweil, here being recognized as very a good cattle herder in the Alps, its main task until early last century. Its a dog that exudes power by its mere appearance, is brave, with a strong personality, aggressive when provoked, determined, easy to train, with a high fidelity to their master but without being a temperamental dog.

Romfilatelia thanks the Cynological Centre Sibiu for the documentary support granted in the creation of this postage stamps issue. 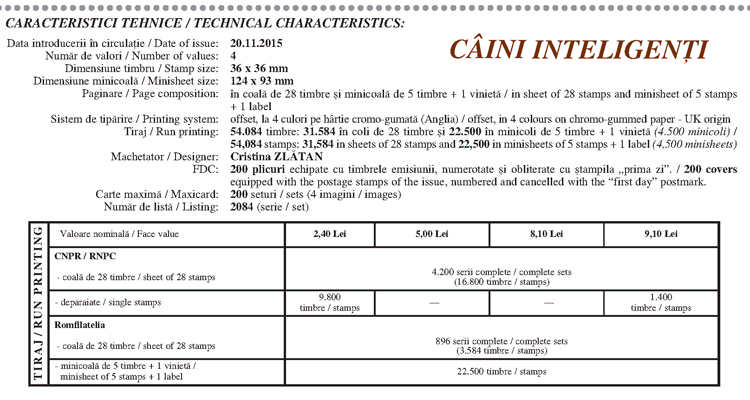