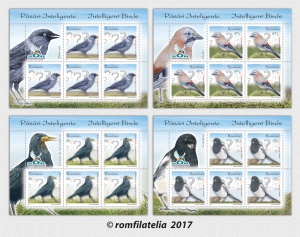 „Where the peacock is missing the crow is the most beautiful bird.”

Romfilatelia resumes its series of projects dedicated to Fauna, a theme that collectors appreciate so much, by introducing into circulation the postage stamp issue Intelligent birds.

The study of bird intelligence led to results that brought under question the pre-conceived ideas about how they can understand and how quickly they can adapt. A common test of intelligence is the bypass test, where a glass barrier sits between the bird and a desired object, such as a piece of food. Most mammals can discover that the objective is achieved only if you first walk away from the target. While poultry fail to pass this test, many birds from the Corvidae family are able to easily solve the problem.

Of the diverse Corvidae in our country, the Eurasian jackdaw or European jackdaw (Corvus monedula), illustrated on the stamp with the face value of Lei 2.50, is one of the smallest birds belonging to this family, being widespread in Western Europe, but can be found less often in south, in Northern Africa and Western Asia.

The pair is formed for life and is very loyal in the relationship. They raise a single brood of chicks every year, which they take great care of. They have strong emotional ties between them, which come from their above-average intelligence, and these ties can be manifested if they are hand-raised by humans.

The jackdaw’s voice is considerably more modulated and more varied compared to that of other Corvidae. They are glib birds, giving the feeling that they chatter a lot among themselves, always making much noise. Without much effort the jackdaw learns to copy words and other sounds.

The Eurasian jay (Garrulus glandarius), illustrated on the stamp with the face value of Lei 4.50, is widespread in Europe, Africa and Western Asia and is a sedentary species. This means that it can be seen in Romania throughout the year.

It was first described by the botanist Carl von Linné in 1758. It is about 35 cm long, has beautifully coloured feathers and its wingspan measures 55-60 cm. The Eurasian Jay is not as easy to spot as its Corvidae cousins, given that it is extremely cautious when approaching human settlements. In winter, due to a lack of food, it can be seen more often in villages and city parks.

The Rook (Corvus frugilegus), illustrated on the stamp with the face value of Lei 8 is a great consumer of nuts wich it drops onto the ground to break them and then nibbles the core. They are also sociable birds that inhabit and nest in large groups, called colonies, being impressive in number. They can be sedentary or migratory (in disparate groups and different directions), depending on the low temperatures in region where they live and th favorable conditions for food.

The Eurasian magpie or common magpie (Pica Pica), illustrated on the stamp with the face value of Lei 15, can be seen in the lowlands, as well as in mountain areas up to altitudes of 2,500 m. Compared to other members of the Corvidae family, magpies are not strong flyers and therefore spend a lot of time sitting on tree branches or on the ground. While foraging, the magpie utters loud sounds, but despite that and despite its size it is often chased away by smaller birds.

Due to its characteristic black and white plumage, it’s easily recognized even by those with little knowledge of birds. The magpie is a diurnal bird which starts being active shortly before sunrise and finishes its activities at sunset.

The Raven (Corvus corax), illustrated on the „first day cover”, has proven tactical skills from a study in which researchers put under observation a population of captive ravens. They had two methods of survival: either they created their own hideouts with food or they would raid other ravens’ hideouts. „Gatherers” drastically changed behavior when they noticed „raiders” placing themselves in order to follow them to their hideouts. A „gatherer” raven will choose another location for his hiding place, where it will take small amounts of food, which it will leave unguarded to convince the “raider” raven that he has found the initial hideout. The latter is itself able to hide its intentions, trying to imitate a „gatherer” but seeking to discover its hiding place.

These results suggest that all ravens, whether they act as „gatherers” or „raiders” are able to retain information on their intentions and therefore manipulate the attention of other birds, either to prevent or to acquire advantages.

Romfilatelia thanks the Romanian Ornithological Society and Mr. Octavian Chende, Mr. Cristian Mihai and Mr. George Avanu, photographers, for their documentary support granted in the creation of this postage stamp issue. 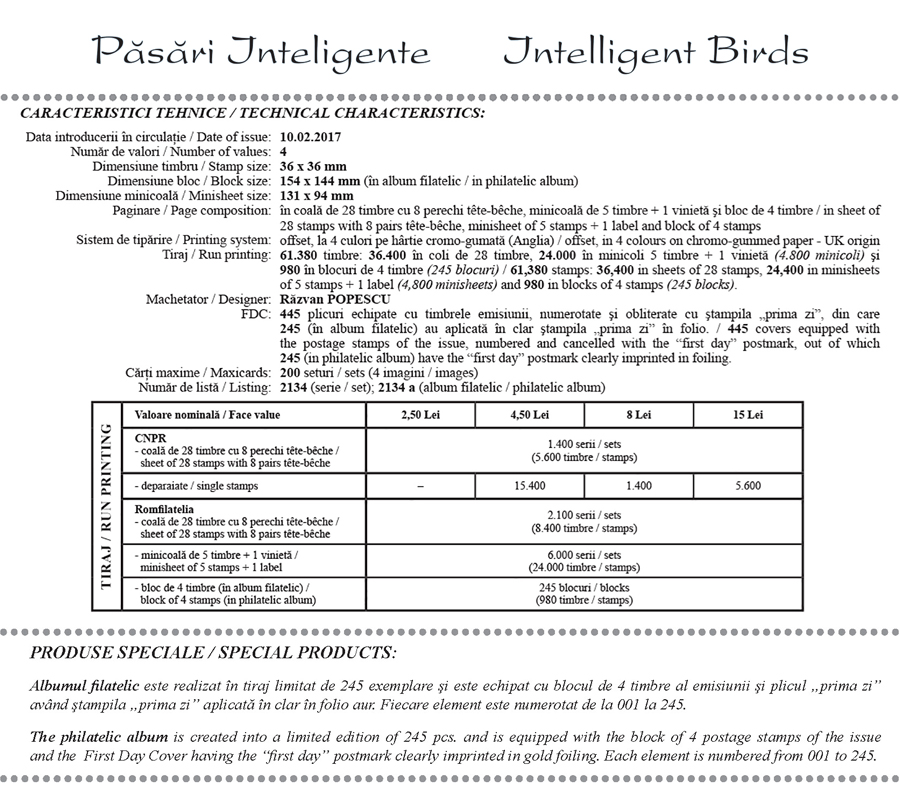