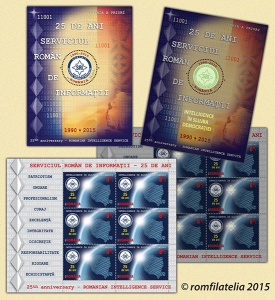 The Romanian Intelligence Service came into being 25 years ago, as an institution whose main purpose was to defend the rule of law and the national values achieved during the bloody events of December 1989. On the occasion of the institutions 25th anniversary, Romfilatelia introduces into circulation the postage stamp issue INTELLIGENCE SAFEGUARDING DEMOCRACY: 25 years, Romanian Intelligence Service, consisting of a stamp and a souvenir sheet.

On the 26th of March, 1990, C.P.U.N. has issued a decree, backed by the entire Romanian political class, asserting the support for the reconstruction, through the Romanian Intelligence Service, one of the most important lines for protecting national security.

The missions of the Romanian Intelligence Service were directed towards the primary objective of safeguarding national security, by protecting democratic values and promoting Romania’s national interests, as well as preserving the citizens rights and freedoms, and upholding the rule of law.

Among the tasks accomplished by SRI, we can mention the collection of information in order to defend the Constitution, protect economic and social security, counter potential foreign espionage, prevent and combat terrorism.

The postage stamp with the face value of lei 8.10 depicts the logo of the Romanian Intelligence Service, together with the title of the anniversary issue, on a sober navy blue background, suggesting the deep outer space .

The image of the Globe, described in binary code, hovers over this background, surrounded by a halo of light whose spectrum suggests the overlap between the natural tones of the Earth’s atmosphere seen from space, and the electric tone of the monitors used to reproduce the virtual reality. The map of Romania is represented in contrasting colour, the symbolism conveying the excellence of the Romanian specialists and young professionals in the cyber field.

A groundbreaking element of the stamp becomes visible only under ultraviolet light: the eight-point star and the logo of the Romanian Intelligence Service appear centred on the horizon point within the halo arch.

The stamp of the souvenir sheet with the face value of lei 14.50 reproduces in the background the Romanian tricolour flag, over which is superposed the binary code of the virtual world, containing in contrasting red colour, the sequence 11001; this is the codified translation of 25, representing the anniversary of the Romanian Intelligence Service.

The round perforation of the stamp and its layout become a universal seal, bearing the emblems of the Romanian Intelligence Service and the years of existence, 1990 – 2015.

The composition of the souvenir sheet joins powerful symbols of the Romanian spirit, the Sphinx of Bucegi and a fragment of a carved gate from the Maramures region, along with a symbolic mark that harmoniously combines aspiration, continuity and lastingness.

The surface of the inner circle representing the logo of the Romanian Intelligence Service, and the words Intelligence safeguarding democracy are visible in UV light spectrum.

The organisational creed of the Romanian Intelligence Service is based on values among of which the most important are patriotism, honour and professionalism.

In fact, its main value, patriotism, is also engraved in the official logo of the institution – Patria a priori.

Romfilatelia thanks the Romanian Intelligence Service for the documentary support offered in creating this postage stamp issue. 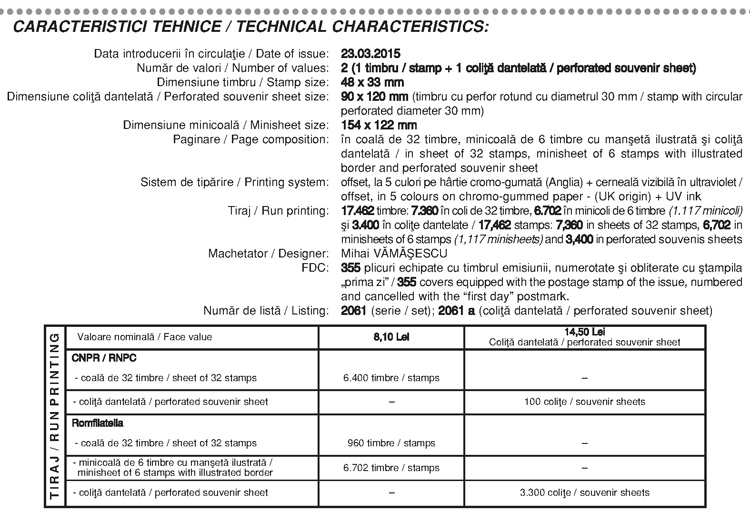