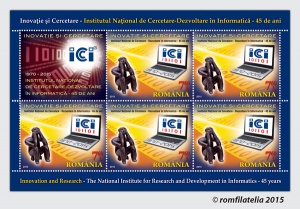 In order to achieve progress, people needed inventions and discoveries that were indispensable to the development of human society. Whether they were in the field of mechanics, electrics, medical, quantum, space, and the list could continue, innovations have led to the prosperity of all mankind.
Being in constant growth, informatics, whose roots start before the 20th century, was formed as a modern field, whose boundaries are still unknown.
The year 1945 marks the creation, by the Americans, of the first computer, which had the dimensions of a building, today reaching a miniature size.
In 1955, Romanian Victor Toma became known in the history of informatics, when he created the electronic computer (CIFA -1), the first digital computer in the socialist countries of Europe except for the USSR.
An important milestone in the Romanian informatics was the creation, in 1970 of the Romanian National Institute of Research-Development in Informatics (ICI), a real cutting edge for the Information and Communications Technology of Romania.
A company must be based on knowledge and that is why the ICI mission is considered a priority in developing scientific and technological support in the field of information and communication technologies.
In the national and international programs, ICI Bucharest transfers technology, values the results of research, conducts consulting activities, studies of diagnosis and prognosis, as well as publishing specialized publications.
Collaborations with science academies, universities and institutes in Romania and abroad are focused on developing high performance scientific calculations, on the advanced technological infrastructure for applications in distributed environments, support systems for public services and e-governance.
The competencies of ICI researchers, the portfolio of national and international contracted projects, the strategic orientation, as well as the management of the National Domain Register .ro ever since its founding, in 1993, turn this institution into a true national leader in the field.
The main coordinates of the research areas and directions are based on the introduction of information and communication technology into spheres of public interest such as health, environment and sustainable development, transport and inclusion.
An important sector of activity is the advanced technologies in the development of applications in distributed environments and pilot communications infrastructure for Grid computing (the use of a network of computers to solve a single task) and lately, the systems of cloud computing.
Other important directions for ICI are the digital content, creativity and personal development in the field of advanced technologies, and also information and communications technology support for business and industry development, all fundamental premises of the cognitive and innovative progress of the firm.
New business models and organizational structures, dynamic, cooperative networking business processes, virtual and digital production, models and technologies in systems and software engineering and advanced computing and control systems are just some of the areas to be added to the big picture of what ICI is today.
During its 45 years of existence, the Institute has had several names, but in 1990 became the Informatics Research Institute (ICI), today being coordinated by the Ministry for Information Society.
Innovation, development and progress or ICI, the institution to which Romfilatelia dedicates the philatelic issue Innovation and research, National Institute for Research and Development in Informatics – 45 years.
The stamp with the face value of lei 7.60 introduces us to the world of informatics, underlining the idea of research in the field of cybernetics. The 45 years anniversary is translated into binary code, on the screen of a widely used computer. The incursion into history is done through the image of the statue of the Thinker of Hamangia, symbol of thought, research and continuous discovery, currently part of the heritage of the National Museum of Romanian History.

Romfilatelia thanks the National Museum of Romanian History for the support granted in the achievement of this postage stamp issue.