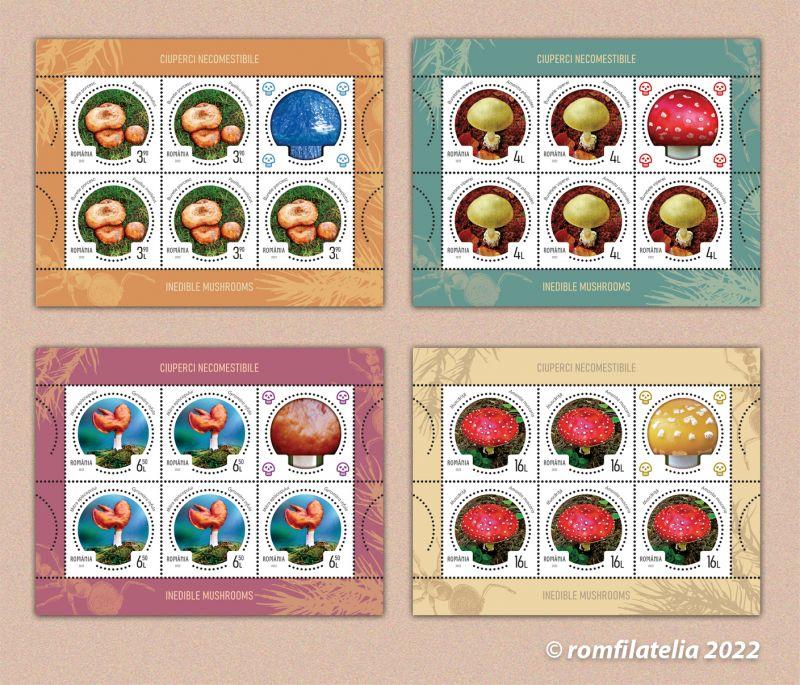 Romfilatelia dedicates to the collectors and mycology enthusiasts the new postage stamps issue entitled “Inedible mushrooms”, that will enter into circulation on Thursday, May 26th, this year.

The issue, consisting of four stamps, is completed by a First Day Cover and a set of four maximum postcards for maximaphily enthusiasts.

On the stamps of the issue are illustrated the most toxic species of mushrooms in Romania:

Paxillus involutus (Batsch) Fr. (brown roll-rim, common roll-rim), illustrated on the stamp with the face value of LEI 3.90 is a species widespread in deciduous and coniferous forests, on acid soils. The sporiferous body can be noticed between July and October and is recognized by the concave cap at maturity, reddish-brown or yellowish-brown in colour, with the edge rolled inwards. The gills are thick, slightly decurrent, yellowish-brown in colour. The stem is cylindrical, up to 6 cm long, the same colour as the cap. When touched or damaged, the sporiferous body turns brown or blackens. The brown roll-rim is a toxic species; an antigen in the sporiferous body causing the immune system to attack and destroy erythrocytes.

Amanita phalloides (Vaill.) Link. (death cap), reproduced on the stamp with the value of LEI 4 is a species widespread in deciduous forests, whose sporiferous body can be noticed between July and October. The pileus (cap) is pale-green, olive-green or yellowish-green with brown streaks arranged radially from the centre to the edges of the cap and can reach a diameter of 15 cm. The gills are free, white, uneven. The stem is cylindrical, white in colour, with ornamentation that mimics the snake skin, provided with a membranous ring and at the base with a white, well developed, far from the stem volva. The death cap is a deadly species. If ingested, it induces the phalloid syndrome, with disorders of the digestive and nervous systems, which converge to coma and eventually death.

Gyromitra infula (Schaeff.) Quél (hooded false morel, elfin saddle), represented on the stamp with the value of LEI 6.50 is a species widespread in coniferous forests, on dead wood or soil rich in organic matter. The sporiferous body can be noticed between July and October and is recognized by the saddle or mitre-shaped cap, with 2 or 4 lobes, brown or reddish-brown in colour, with a bare inner stem, brown or pale brown in colour, with length up to 6 cm. It is a toxic species that induces the gyrometry syndrome, with harmful effects on the digestive, renal and nervous systems, which can induce comatose states.

Amanita muscaria (L.) Lam. (fly agaric, fly amanita), illustrated on the stamp with the face value of LEI 16 is a common species, widespread in coniferous and deciduous forests. The sporiferous body can be noticed between July and October and is easily recognizable due to the red or red-orange colour of the cap, which has numerous white warts and can reach a diameter of 20 cm. The gills are free, white, uneven. The stem is cylindrical, white and has a membranous ring at the top and a well-developed adherent volva at the base, in the form of concentric sponges. The fly agaric is a toxic species, inducing muscarinic syndrome, with disorders of the digestive and nervous systems (hallucinations, delirium).

Pleurocybella porrigens (Pers.) Sing. (angel wing), depicted on the First Day Cover is a species widespread in coniferous forests, on dead wood in various stages of degradation. The sporiferous body can be noticed between August and October and is recognized by the shell shape (similar to that of individuals of Pleurotus, a genus with which it can be confused), white in colour, with decurrent gills on the acentric stem. The species is toxic, deadly if ingested, with irreversible harmful effects on the nervous system, in some cases leading to encephalopathy.

Romfilatelia thanks the main biologists Ana Cojocariu, PhD and Cristiana Virginia Petre, Phd of the “Anastasie Fătu” Botanical Garden of “Alexandru Ioan Cuza” University of Iași, for the documentary and photographic support granted to the development of to this postage stamps issue. 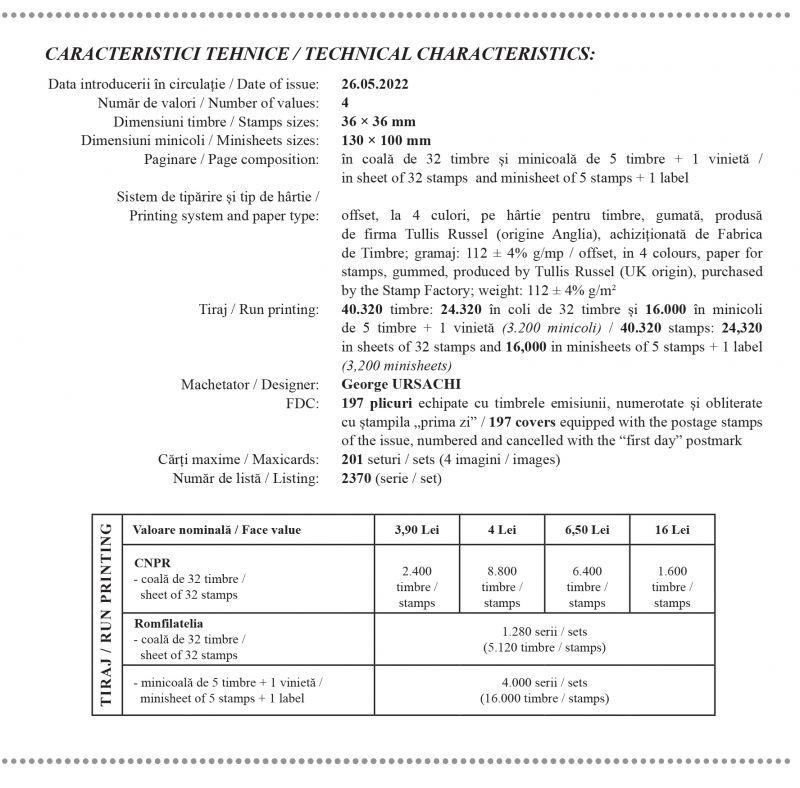