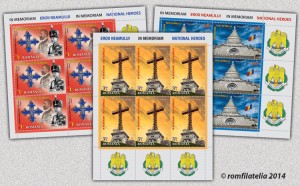 “Do not shed tears on the tombs of heroes,

Rather praise them through songs,
Thus, their fame shall resound as echo,
Throughout legends, over centuries!”

In 1914 started the first global conflict, a war that marked the destinies of a generation. An ally of the Entente (which included England,France and Russia), as of 1916 Romania entered the fight under the mobilising impulse given by the express desire of bringing together all the Romanians within the single border of an independent state.

Marked by bloody clashes with the Central Powers, the battles and sacrifices of Romanian soldiers have been eventually crowned with victories that contributed directly to the accomplishment of the Great Union on December 1st, 1918, when the last remaining historical province of Transylvania united with the Kingdom of Romania.

Throughout the themes they depict, the three postage stamps of this issue are a symbolic reminder of these difficult battles: the Mausoleum of Marasesti is the monument meant to honour the bravery of fallen Romanian soldiers, the Heroes’ Cross, also known as the Cross on the Caraiman Mountain, and the Order of Michael the Brave 1st Class represents the military order awarded for outstanding achievements in battle.

The battles of Marasti-Marasesti-Oituz in July-August 1917 were fought against a numerically and technologically superior enemy, the Romanian army succeeding in stopping the German offensive only after dramatic clashes. The reminder of all these is the impressive Mausoleum of Marasesti, where the remains of over 5,000 identified and unidentified soldiers are placed in individual and common crypts. The indoor museum gathers battle trophies: flags, weapons, guns, missiles, etc.
The great bas-relief on the outside dome of the mausoleum, the work of sculptors Cornel Medrea and Ion Jalea, depicts different episodes of battles. The exterior walls of the mausoleum bare engraved the battle cry: You shall not pass!

The Heroes’ Cross, designed and erected under the supervision of King Ferdinand and Queen Marie between 1926 and 1928 was dedicated, as it is written on the commemorative plaque, “to the glory and memory of heroes from Prahova who fell in the First World War, 1916-1918, to defend their country”.

Upon completion of the work, the Heroes’ Cross was the tallest metallic structure in Europe, located at approximately 2,300 m altitude, being considered along with the Eiffel Tower in Paris, the Statue of Liberty in New York or the statue of Christ the Redeemer in Rio de Janeiro, an engineering monument and a symbol of great value.

The pedestal of reinforced concrete, built after the inauguration on September 14th, 1928, housed on two levels an electric generator powering 120 bulbs vertically and horizontally placed along the arms of the cross. The bulbs were lit the nights of August 15th (on St. Mary’s Day) and 40 days after Easter (The Ascension Day and The Heroes’ Memorial Day).

Through the issue of postage stamps In Memoriam, National Heroes, Romfilatelia honours the heroism of the Romanian soldiers whose names are enshrined in the pantheon of national heroes having sacrificed their lives in order to contribute to the historic becoming and union of the Romanian people, for defending the soul and ancestral faith, the freedom, dignity and the country’s unity.

Romfilatelia thanks the Ministry of National Defence, The National Office for Heroes Memory and the National Military Museum “King Ferdinand I” for the documentary support granted in the accomplishment of this issue of postage stamps. 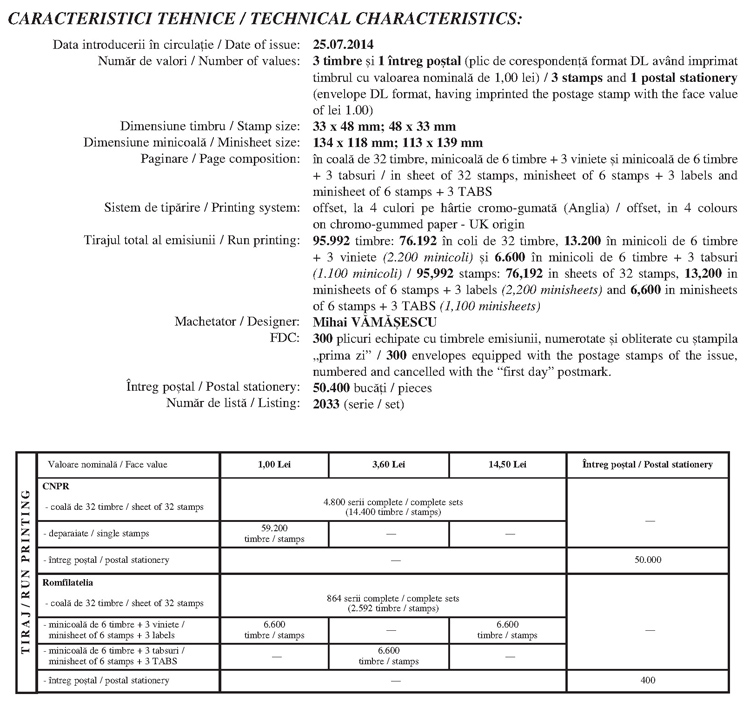