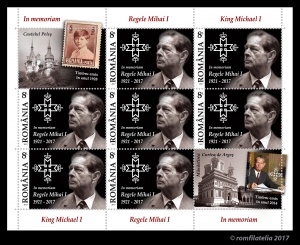 Romfilatelia mourns the last King of Romania, and pays its respects by launching the postage stamp issue In memoriam, King Michael I (1921-2017). The stamp, with the face value of Lei 8, illustrates the portrait and monogram of King Michael I.

His Majesty, King Michael I, was one of the most prominent personalities in Romanians’ history, and Romanian stamps featured his portrait for nine decades. He was born on October 25th, 1921, in Sinaia, the son of Carol, crown prince of Romania, and of Helen, Princess of Greece. Michael was proclaimed King by the age of six, on the death of his grandfather, King Ferdinand I “the Unifier”, and after his father’s abdicated his right to the throne. Although the Royal powers were exercised by a Regency Council, it was the portrait of the young sovereign that was featured by different postage stamp issues, starting with 1928. The stamps continued to illustrate the portrait of the young King up until his father returned to the country, in June 1930. Carol II conferred his son the title of Grand Voivode of Alba-Iulia, and Michael continued to take part in the country’s public life. Michael activated in the Romanian Scout movement, and his silhouette was illustrated on the special stamps issued on the occasion of the Scout Exhibition, in 1931. Other stamps from the 1930s depicted Michael as Grand Voivode, heir to the throne, his portrait being featured along with the one of his father.

Michael I returned to the Romanian throne in September 1940, following the abdication and exile of his father. The postage stamps issued afterwards depicted him as Sovereign and Head of the Army.

During the World War II, several stamps adorned with different portraits of the King were issued to mark the liberation of Bessarabia and of the Northern Bukovina, or the military victories on the Eastern Front.

After 1945, different stamps illustrating King Michael’s portraits were launched to encourage Romanians’ postwar reconstruction efforts, or to gather support for the areas in the country affected by famine.

On December 30th, 1947, Michael I was forced to abdicate, and to leave the country. His Majesty was a powerful voice of the Romanian exile, and he never ceased to encourage his people, keeping alive the hope that one day Romania would be free from communism. In June 1948, King Michael married Anne, Princess of Bourbon-Parma, and the Royal couple was blessed with five daughters: Margareta (1949), Elena (1951), Irina (1953), Sofia (1957) and Maria (1964).

After his forced abdication, Romanians continued to love their King. Romfilatelia has honored Michael I and the Romanian Monarchy, by releasing several postal stamp issues devoted to the Royal Family of Romania.

In May 2006, a philatelic issue dedicated to the four Kings of Romania was launched to mark 140 years from the foundation of the Romanian Royal dynasty, and also highlighted the restoration of the tradition of depicting Romanian Royalty on postage stamps.

On the occasion of King Michael’s 93rd anniversary, Romfilatelia released in 2014 the philatelic issue entitled The history of Royalty, Michael I.

Another postage stamp issue, Royalty in Romania, put into circulation in January 2015, contains a stamp depicting King Michael I together with Queen Anne.

In October 2016, Romfilatelia launched the stamp issue Engines, a Royal Passion, dedicated to King Michael’s anniversary and to his lifelong passion for horsepower.

Michael I was a dearly-loved King, profoundly respected in Romania and around the world, a symbol of hope and morals, and an illustrious figure in the history of the Romanian Monarchy.

We bid farewell to our beloved King!

Romfilatelia thanks the Royal House of Romania and Mr. Marius Baragan for the documentary and photographic support provided for this postage stamp issue. 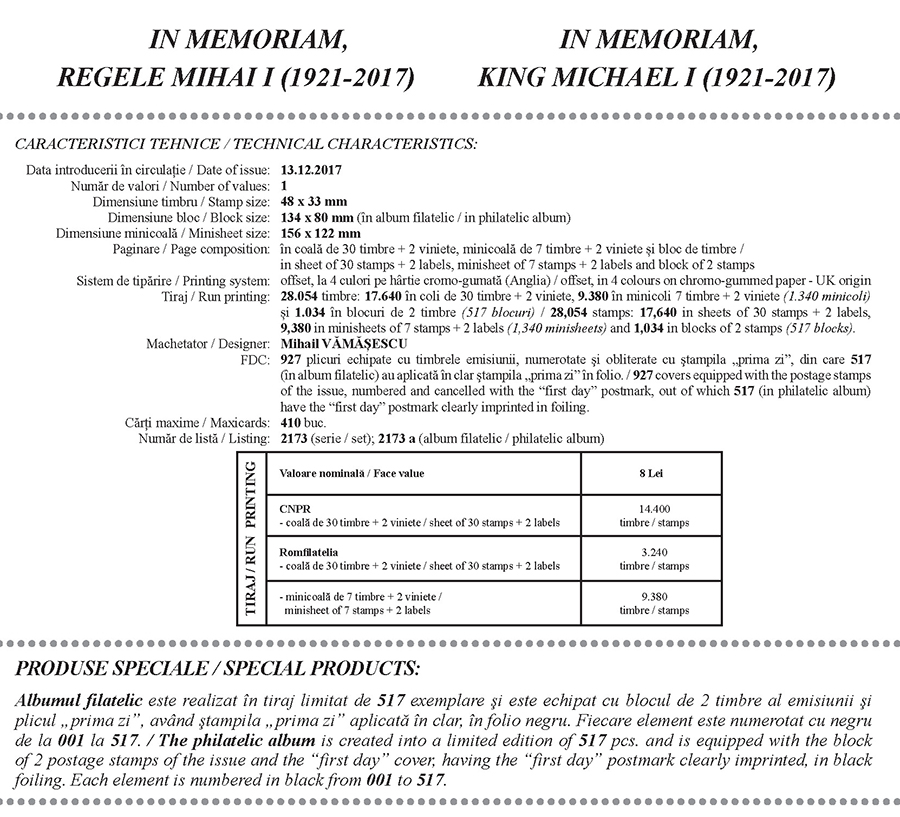