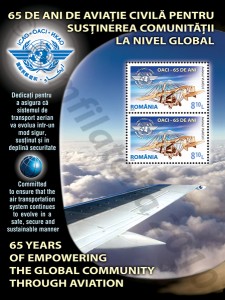 To inaugurate the international operations of air transport after the end of the world conflagration and the sustained and continuous development of post-war international aviation, in 1944, between November 1st  and December 7th, at the United States of America’s proposal, the Chicago Conference took place and ended in signing the International Civil Aviation Convention which became in 1947 a specialized agency of the United Nations, having as main objectives the promotion of security and the development of the regulation framework of the international civil aviation in the whole world.

The date of December 7th was declared by ICAO Council the International Day of Civil Aviation in 1994 and two years later it was included in the calendar of the International Days of the United Nations, so as to make people aware of the civil aviation’s importance in the economic and social development of the states and of ICAO’s role in promoting the safety and performance of the international air transports.

Events, occasioned by the celebration of 65 years since the signing of Chicago Convention, will take place in the whole world starting from December 7th 2009 throughout 2010.

ICAO, having its headquarters in Montreal, Canada, establishes the standards and the requirements necessary for safety, security, efficiency and continuity of civil aviation at world level as well as for the environment protection where air operations take place, representing for the 190 contracting states the international body for cooperation in all the activities of  the civil aviation field.

Before being an ICAO member, Romania signed, next to other 38 countries, the International Air Convention – ICAN, set up in 1919 occasioned by the Peace Conference in Paris. ICAN, which laid the bases of today’s “safety” concept, was the international precursory body of ICAO.

Starting from 1965 Romania has become an ICAO member, once with the submission of the accession notification.

In 1993, next to Hungary, the Czech Republic, Slovenia and Slovakia, Romania became part of the Central European Rotation Group (CERG), whose goal is consultation and cooperation with ICAO Council and with other permanent bodies so as to mutually establish some common viewpoints related to the regional problems.

In 2007, as a CERG member, Romania was elected in the ICAO Council and in March 2009 it was co-opted in the Multidisciplinary Group of ICAO as a
vice-president, next to Japan, Mexico, Nigeria, the Russian Federation and Saudi Arabia.

In 2009, as part of the Universal Safety Oversight Audit Programme – USOAP, carried out by ICAO at international level, Romania was evaluated with the view of checking the conformity of the civil aviation activities carried out at national level with the ICAO requirements, the obtained results having a major importance for Romania, both at international and European level also demonstrating that the aeronautical safety standard has been attained and it offers solid guarantees.

We thank to the Romanian Civil Aeronautical Authority (AACR) for its support in the accomplishment of this postage stamps issue. 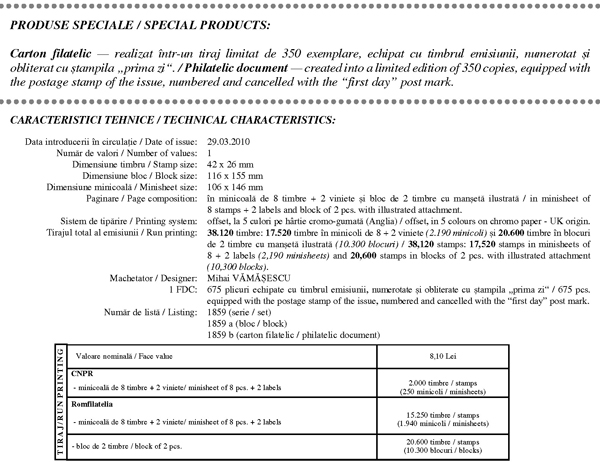