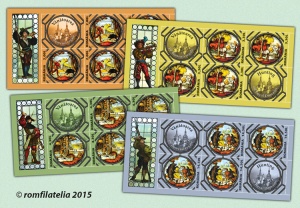 Romfilatelia, continuing the ample project of promoting the hunting heritage and its artistic interpretation, introduces into circulation the postage stamp issue Hunting on royal domains.
Since time immemorial, hunting constituted a means of survival for humans.
The need for food, and defence from any animal attacks were the first instinctual forms of conservation. Hunting is not exclusively a human action; there are of course other living beings that hunt. This activity appeared before man cultivated plants or raised animals, examples being some populations (islands of Polynesia, Australia, Africa and Northern Asia) for which at present it is of paramount importance.
In time, however, hunting has evolved, to it being added cultural and symbolic connotations that will keep the basic primitive origins of the human existence. An important element of hunting was and still is the hunters connection with nature. Through his action, the hunter demonstrates power through spectacular but also cruel forms, kept in mythology or in the legends of all peoples.
Passion for hunting is based on a traditional inheritance that is handed down from father to son, observing the rituals and proper language.
Hunting has become a royal passion ever since the times of the first kingdoms and empires, and then a privilege of the aristocracy. It has also become a symbolic figure associated with the sovereign who was considered near divine, shrouded by a mythical aura and religious superiority over his subjects.
Romanias recent history records King Carol Is Royal Peles domain, which, by building the Foisor Castle, originally intended for royal hunting parties, paid tribute to this millenary activity.
Throughout his life, for King Carol I of Romania hunting acted as a civilized way of respecting a long tradition and a perpetuation of ars bellorum (the art of war), the king being himself educated in the best military schools in Europe.
Royal hunts took place in the presence of foreign guests, members of the royal houses of Europe, and the hunting invitation was considered a sign of high appreciation by the king. Besides these, family members of representative Romanian aristocracy also took part.
On the whole, the Peles and Foisor Castles are keepers of symbol swhich pay tribute to this passion through the decoration of furniture pieces, stained glass windows, bas-reliefs depicting animals or hunters, the trophies of animals hunted by the royal family members, the hunting emblems or the collection of old hunting weapons.
The Hall of hunting weapons occupies an important place in the architectural project of the castle, for a long period this room making up for the absence of the Great weapons hall which was later built. Decorated in Altdeutsche style, certainly a style familiar to King Carol I, the Hall of hunting weapons was transformed into a storage place for the hunting weaponry dating from the 17th-19th century, collected by the king.
Furthermore, his ancestor, Emperor Frederick II of Hohenstaufen (1194-1250), represented in the stained glass of the Peles Castle, as the symbol of the struggle for faith, as well as an avid hunter, wrote in 1247 the first treaty on hunting De arte venandi cum avibus (The art of hunting with birds).
Flemish tapestries that capture crucial moments of the hunt, called Hunting wild boars and Falconry hunting, or replicas of the two famous Flemish paintings with a hunting theme remain impressive.
The postage stamps of the issue illustrate the castles stained glass, created at the end of the 19th century, in the Zettler workshops (Munich), which reproduce animals or hunting scenes such as the climax of hunting stags, hares, wild boars and bears.

Romfilatelia thanks the Peles National Museum for the documentary support granted in the achievement of this postage stamp issue. 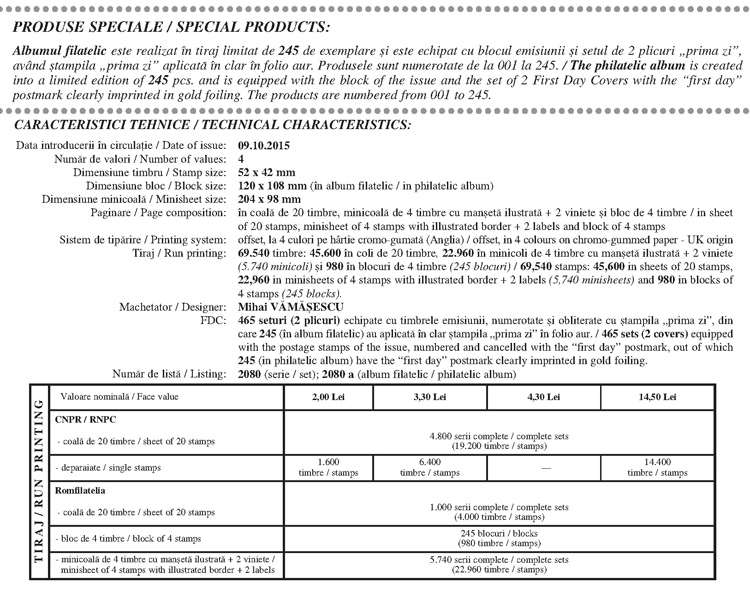