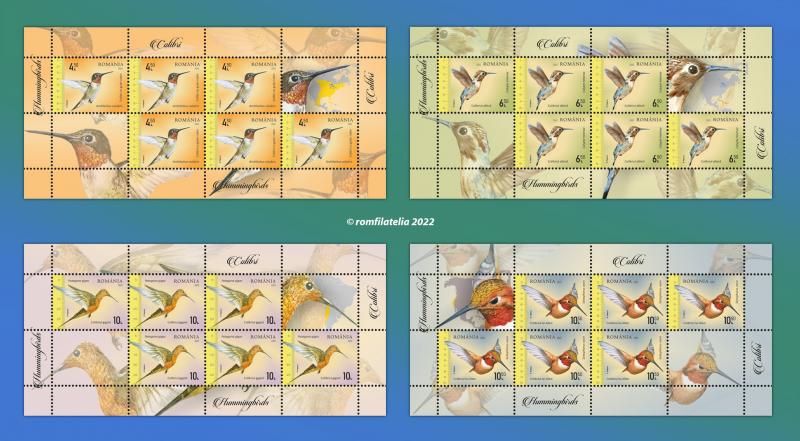 Romfilatelia introduces into circulation on Friday, July 29th, this year a new issue under the generic name “Hummingbirds”, inviting collectors of the Fauna theme to the wonderful world of the smallest birds in the world, which, despite their small size, are extremely fast and intelligent.

The issue includes four stamps, four minisheets, a First Day Cover and for the passionate of maximaphily, a set of four different maxicards.

Hummingbirds (Family Trochilidae) occupy a wide variety of New World habitats, from arid desert areas to humid tropical forests. The family comprises 363 species included in 104 genera. All species feed on nectar, small insects and other invertebrates. They are birds famous for the special colours of their plumage, which are not colours given by chemical pigments but are of a physical nature, due to light interference phenomena, and include shades of bright green and blue. They are spread in the two Americas. Eggs are the size of a pea. The stamps of the issue include the following species: ruby-throated hummingbird, bee hummingbird, giant hummingbird, Allen’s hummingbird.

The ruby-throated hummingbird (Archilochus colubris), represented on the stamp with the face value of Lei 4.50, is a species of hummingbird that nests in Canada and eastern North America and winters in Central America. Females are responsible for raising the chicks and build their own nests, which they bind with spider’s silk. Being very adaptable, they feed on more than 31 types of plants, although they prefer those with red flowers, but also on small insects. The fact that it is a little shy of humans makes it one of the most appreciated and studied hummingbirds. It is identified by its metallic green-bronze dorsal parts. It has a large shiny red patch under its throat. The rest of the ventral parts are whitish.

The bee hummingbird (Calypte helenae), depicted on the stamp with the face value of Lei 6.50, is an endemic species of the Cuban archipelago. The bee hummingbird is the world’s smallest bird, but an agile and powerful flyer. It needs to refuel every few minutes to maintain the energy needed for flight. It feeds on the nectar of over ten plant species, nine of which are native to Cuba. They occasionally eat insects and spiders, and in a day they consume up to half their body weight, which is 2.6 grams in females and 1.95 in males. The female, larger, is 6.1 cm long and green-blueish in colour, with pale grey underparts. The tips of the tail feathers have white spots. The 5.5 cm long male has reddish to pink head, wattle and neck during mating season.

The giant hummingbird (Pantagona gigas), illustrated on the stamp with the face value of Lei 10.00, is a species spread in the east of South America. As the name suggests, it is the largest of over 300 species of hummingbirds with a size of 20 cm. Its habitat is in arid, inhospitable areas at an altitude of 4,500 m in the Andes, where it feeds on nectar and invertebrates and where the female builds her nest in the branches of some cactus species. The colouring is bronze-reddish on the dorsal sides, sometimes with a grey tone. The forked tail is paler at the base. Females may have spots on the ventral sides.

The Allen’s hummingbird (Selasphorus sasin), depicted on the stamp with the face value of Lei 10.50, is one of the seven species of the genus Selasphorus. It nests in the western United States, in scrubby forests and coastal grasslands. It measures between 75 and 90 mm in length. The male has a green back and forehead, with rust-coloured flanks, rump and tail, and the neck in multicoloured lights, predominantly red-orange. The female is similar in coloration, predominantly green, with colour only on the tail, which also has white tips. Males are very aggressive and territorial, chasing away even much larger birds of prey, such as the falcon. 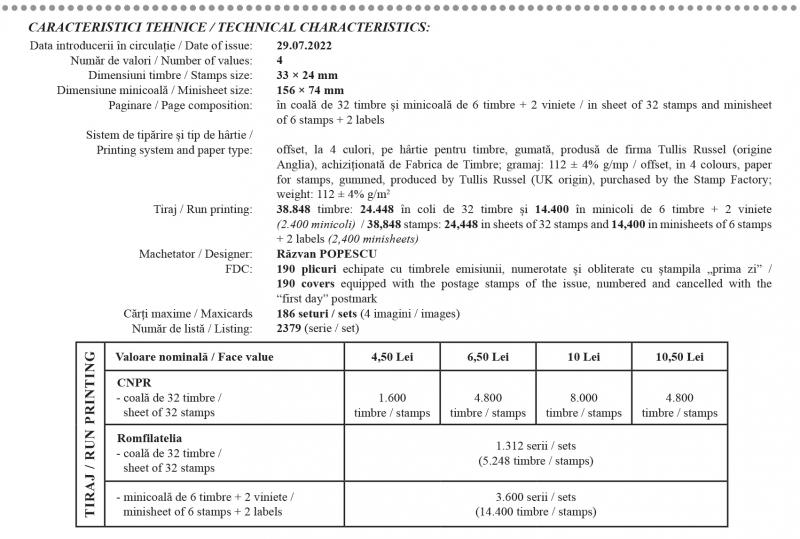