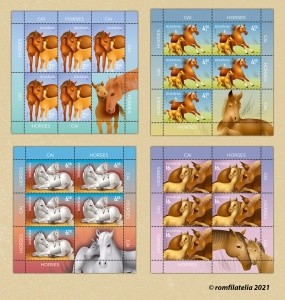 The four stamps of the issue, the maxicards and the First Day Cover, reproduce into a delicate graphic concept, images of the horse families with their warm and protective attitude towards their foals, the energy of running, the statuary beauty of the limbs of this species, much loved and protected by people. The history of human society, in its evolution, includes since early antiquity, the presence of horses in everyday life, whether it was in transport and fast travel, or in the frequent wars mankind has had ever since the fifth and sixth centuries BC, in the time of the Assyrians and the Persians. However, it seems that the domestication of horses took place approximately six millennia ago, in a vast territory that includes the grassy steppes of Ukraine, South-Eastern Russia and Kazakhstan. Existing in the American lands as well, the horse, which disappeared temporarily, is brought back in the process of colonizing America in the 16th century. Living in the wild, it was tamed by the American Indian tribes and is known today as the mustang. First used for riding and for supervising long-distance herds scattered for grazing, the horse became an important element in the transport revolution, with the advent of wheeled vehicles around 3500 BC. in Mesopotamia. The use of horses has made a decisive contribution to the development of trade and to the emergence of the first elements to change people’s lives by arranging transport routes.

Since the 2000s BC. chariots began to be used, destructive, easily displaceable means that ensured fast victories for the invaders. Later, the speed of the attacking troops increased with the establishment of the cavalry.

Returning to medieval Europe, it should be noted that the transport of long-distance passengers, in comfortable carriages, represented a constant concern for the growth of strong and fast horses. During the arranged travel, at well-established distances, special places were organized for replacement horses, which allowed a trip to go on without interruptions caused by the need to give horses time to rest.

The passions of the nobility adapted the use of horses to hunting parties and to organizing horse races.

Horse breeds are divided into three categories: horses with “hot blood”, with speed and resistance to fatigue; horses with “cold blood”, used for hard and difficult work and horses with “warm blood”, resulting from crosses between horses with hot blood and cold blood, with the aim of creating certain breeds for riding, especially in Europe. It is currently estimated that more than 300 horse breeds are used worldwide for various activities.

In order to create a new breed, certain selection and feeding criteria are necessary, as well as farms and breeding of young animals, aiming at the transmission of the chosen traits, the achievement of a significant number of similar horses in appearance and character. A new breed is recognized after registration of the relevant documentation, the presence of 1-2 reproduction farms and several breeding farms, and also preparation for the requirements of applicants.

Horses have lost their original importance, their role being successfully fulfilled by agricultural equipment and motorized means of transport (cars, trucks, etc.). Horses of many breeds are bred for sporting events, horseback riding, search and rescue operations, in police patrols. They are still needed in hard-to-reach areas where there are no routes adapted for the transport of goods and people. The breed, by origin, care and environment in which it lives, determines the life expectancy of the domestic horse between 25 and 30 years. It is said that in the 19th century, a horse named “Old Billy” lived to be 62 years old. In the modern era, Sugar Puff, the oldest pony, listed in the Guinness Book of World Records, died in 2007 at the age of 56.

Romfilatelia thanks the “Grigore Antipa” National Museum of Natural History for the documentary support provided for the development of this postage stamps issue. 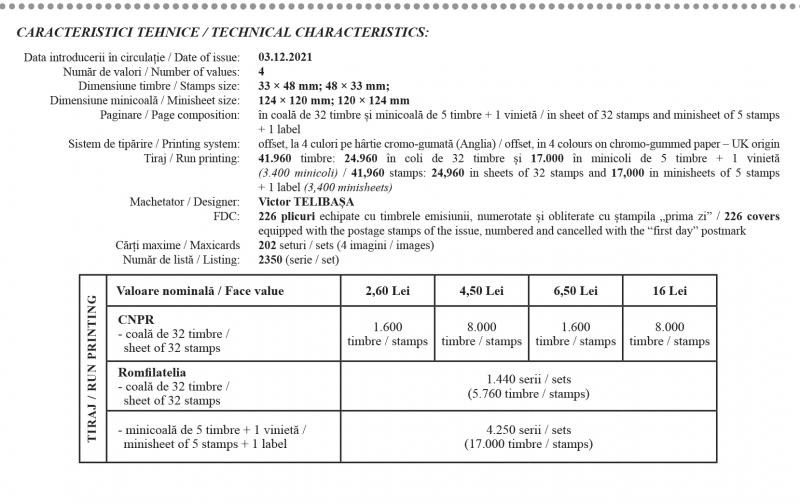