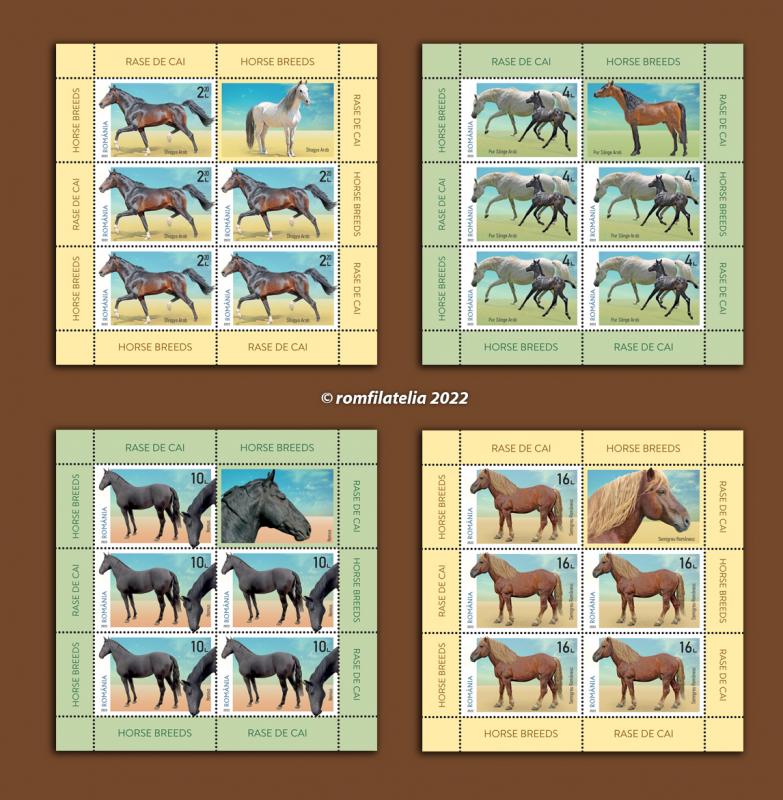 “A horse is poetry in motion.”

Coming to the support of stamps collectors and horse lovers, Romfilatelia has included in the current Editorial Plan, the postage stamps issue Horse Breeds.

The issue, consisting of four postage stamps and a First Day Cover, will be put into circulation on Tuesday, August 9th this year.

The following horse breeds are illustrated on the stamps of the issue: Arabian Shagya, Pure Blood Arabian, Nonius, Romanian Semiheavy.

Arabian Shagya,is illustrated on the stamp with the face value of Lei 2.20. The breed was conceived in the area of Bukovina in the 18th century in the Austro-Hungarian Empire, when the Rădăuți Stud Farm was established, and started from a genetic foundation of Pure Blood Arabian. The purpose of training and breeding the Arabian Shagya breed was primarily a military one, seeking to create a resistant horse, with elegance in movement and with a lot of energy. The conformation is harmonious, with a foundation and fine and resistant joints, which impress elegance, roan at the coat. The temperament is lively, eager for movement and stands out for its gentleness and intelligence.

Pure Blood Arabian, is depicted on the stamp with the face value of Lei 4. The Arabian breed is the oldest pure breed in the world, originating from the plateaus of Central Asia, the one that formed the basis of the formation of all cultural races existing today. Because it is mentioned in the Koran, the breeding and improvement of the Arabian horse has become a sacred duty in the Islamic world. The breed has resistance and a great capacity for adaptation due to the extremely harsh environment in which it evolved. Introduced in Western Europe following the Crusades, it led to the formation of the fastest breed in the world, the Thoroughbred. The Pure Blood Arabian horse fascinates with its beauty, hot-blooded temperament and performance. It is characterized by a waist of 145-152 cm and a body mass of 450 Kg. The general conformation stands out through a pronounced proportionality of the whole.

Nonius, is represented on the stamp with the face value of Lei 10. The foundations of the breed were laid in the 19th century in Hungary, with the aim of being used for traction. The name comes from the Anglo-Norman stallion Nonius, of French origin, captured by the Austro-Hungarian cavalry and then used intensively for breeding, the stallion having a special waist of 171 cm. Very energetic horse, with a great capacity for work, docile and a calm temperament, it is suitable for agricultural work and transport, but it is used a lot in the police and gendarmerie also. There are two morphological types, the large one of 166 cm and the small type of 156 cm. The Nonius breed has a robust, strong, muscular but elegant appearance.

Romanian Semiheavy, depicted on the stamp with the face value of Lei 16, is a relatively recent breed, created to provide an answer to a necessity of the 50s, obtaining a breed with skills for work, strong and mobile. The formation of the breed was possible through the use of a rigorous breeding system, which included many experiments, started as early as 1951. The height is 151-160 cm, with short withers, a well-muscled rump and massive, strong limbs. Docile and gentle, it moves easily even though it is a robust horse and is used for pulling heavy weights, being able to be used both at a walk and at a trot.

Romfilatelia thanks to the Ministry of the Environment, Waters and Forests and the specialists of the NATIONAL FOREST ADMINISTRATION – ROMSILVA – Directorate of Horse Breeding, Exploitation and Improvement, for the documentary and photographic support given to the development of this postage stamps issue. 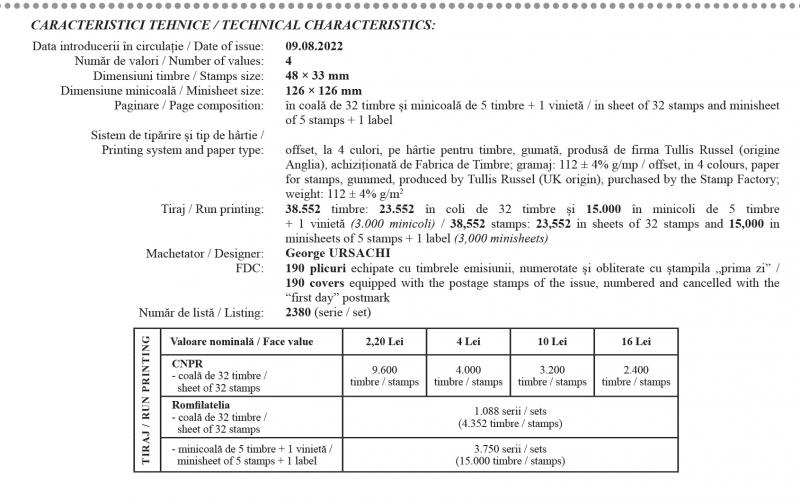