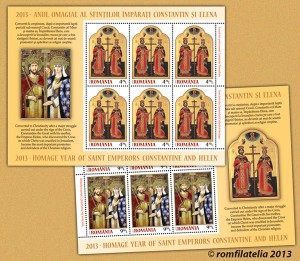 The Holy Synod of the Romanian Orthodox Church decided to declare 2013 the Homage Year of Saint Emperors Constantine and Helen, considering the anniversary of 1700 years since the Edict of religious tolerance of Milan. Romfilatelia also joins this initiative by introducing into circulation a postage stamps issue dedicated to this major event of the Romanian Orthodox Church.

Constantine the Great or Constantine I (Gaius Flavius Aurelius Constantinus) lived between 272 and 337 and reigned as Roman Emperor between 306 and 337. Before converting to Christianity, Constantine worshiped the Sun and considered Sol Invictus to be the foundation of his Empire.

In 312 Constantinewon the battle from Pons Milvius (the MulvianBridge) against Maxentius. This extraordinary fact represented a decisive incentive for his conversion to Christianity. Historians of that time claimed that the Emperor saw a glowing Cross bearing the words written in stars: In this sign thou shalt conquer!, and, in the night before the battle, Jesus Christ Our Saviour Himself appeared in his dream, requesting him to include the Cross seen in the sky on the soldiers’ flags. Winning the battle was a real miracle forConstantine, given that his army counted only 20,000 soldiers and Maxentius’ consisted of 150,000.

Persuaded by the religious and moral values of Christianity, the Emperor Constantine declares it to be religio licita within the entireRoman Empire.

In 313, under the Edict of Milan, the freedom to practise Christianity was proclaimed and, in 324, after the defeat of Licinius, the ruler of the Eastern Roman Empire, Constantine re-established the Empire`s unity.

The First Ecumenical Synod held in Nicea in 325 stated the Church as an important spiritual, moral and cultural factor of the State and, at the same time, it recognised Jesus Christ as the Son of God on Earth.

Constantine the Great extended the Empire’s interest area on the territories between Danube and the Black Sea, reconstructing public edifices and fortresses (Adamclisi, Constanţa County; Sucidava – the current City of Corabia, Olt County), and also, inaugurating the bridge over the Danube between Sucidava and Oescus on the 5th of July 328.

The “newRome” was established on Bosporus banks, by building the capital cityConstantinople. The Empire took the form of a divine right monarchy, which was based on a highly hierarchised society.

Empress Helen, the Emperor Constantine’s mother, had a strong influence on her son’s conversion to Christianity and conducted extended researches to discover the Cross on which Jesus Christ Our Saviour had been crucified.

The tradition of the Church confirms that a part of the wood in our Lord’s Crucifixion Cross was kept in Jerusalem, and another one was brought to Constantinoplein the Saint Sophia Church.

The Empress Helen passed away in 329 and her son, the Emperor Constantine, died in 337 in Nicomedia, after being baptised as Christian. The two emperors’ bodies were laid to rest in the Church of the Holy Apostles inConstantinople, which they had built as an apostolic and imperial necropolis.

The Orthodox Church canonised them as Saints and set the 21st of May as their annual celebration day.

The images on the postage stamps reproduce two icons of the Saint Emperors Constantine and Helen achieved in different manners and which can be found in the heritage of the Patriarchal Cathedral.

The first day cover illustrates the silver reliquary box containing the relics of the Saint Emperors Constantine and Helen.

We address our thanks to His Beatitude Father Daniel, Archbishop of Bucharest, Metropolitan of Muntenia and Dobrogea, Locum Tenens of the Throne of Caesarea Cappadociae and Patriarch of the Romanian Orthodox Church, and to the Archbishopric of Bucharest for their support granted in the accomplishment of this postage stamps issue. 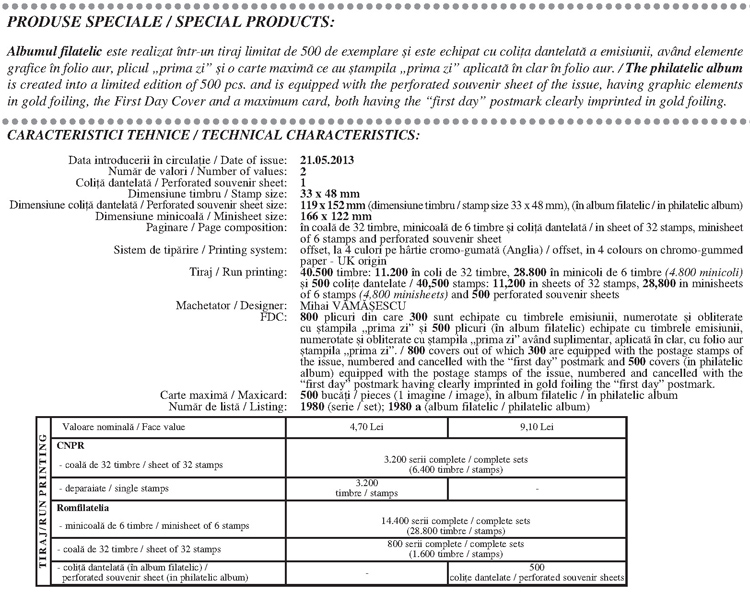