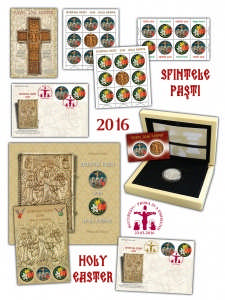 Easter, the Christian holiday that calls on people to take the Holy Light, brings the unique joy of the Resurrection, but also rituals and religious traditions, among which the salute known even by the youngest ones: Christ is risen!, Truly He is risen!

Like every year, Romfilatelia announces the Holy Easter in advance and dedicates a special stamp project to the Greatest Feast of Christianity. In 2016, the stamps invite believers everywhere to visit the Putna Monastery, built by St. Stephen the Great, Prince of Moldavia, keeper of uninterrupted spiritual life, and also of the richness and generosity of those who were benefactors of this heavenly abode.

The elements of the postage stamp issue Holy Easter 2016 can be purchased starting with Wednesday, March 23rd, 2016, in Romfilatelia’s stores in Bucharest, Bacau, Brasov, Cluj-Napoca, Iasi and Timisoara. To illustrate them were chosen representative cult objects from the Putna Monastery’s heritage, such as thematic icons, a wooden cross, clasps, each of these objects bearing in itself a historical and symbolic significance.

The Crucifixion icon, from the royal church iconostasis, is illustrated on the face value of lei 1.00. It was created during  1771 – 1773, at the command of Metropolitan Iacov of Moldavia. According to documents discovered, most of the icons were painted by Gheorghe Zugravul in 1771, the painter proving to be an important representative of the Moldavian school in the 18th century, through the local folk elements that he intertwined in the most realistic stylistic approach of the icon art.

The second stamp of the issue, having the same face value of lei 1.00, makes the transition to the national folklore by presenting the flowers that gladden all eyes, opening their petals close to Holy Easter, known as Easter Flowers (Anemone nemorosa, Anemone ranunculoides, Fritillaria imperialis). The legends surrounding these flowers offer several variants about their existence – whether they arose from the tears the Virgin Mary shed at the feet of her crucified Son or that the flower did not believe in Jesus, and when He rose the flower bowed its head in shame.

The perforated souvenir sheet, with the face value of lei 8.00, presents, in its background, the
Four Gospels written by the monk Paladie and given by Stephen the Great in 1489, and in the foregound, there is a handheld cross, hand carved and locked, given by bishop Sava to the Sinesti hermitage in 1698.

The philatelic album is created in a limited edition of 421 pcs. and is equipped with a special block of three postage stamps (one stamp of the Crucifixion + two stamps of the Easter Flowers) and the First Day Cover having the “first day” postmark imprinted in gold foiling. Both products are numbered from 001 to 421.

The philatelic product is an exclusive, original concept by Romfilatelia, created into a limited edition of 421 pcs. The silver stamp, replica of the postage stamp illustrating the icon of Crucifixion, is presented in an elegant box. The interior lid of the box holds a philatelic booklet with a block of two stamps (the Crucifixion stamp + the stamp of the souvenir sheet) and the certificate of authenticity, numbered from 001 to 421.

Romfilatelia invites the public to enjoy in advance the philatelic products of the issue Holy Easter 2016 and the silver stamp dedicated to Resurrection, genuine collection pieces which can accompany messages and gifts for the loved ones.