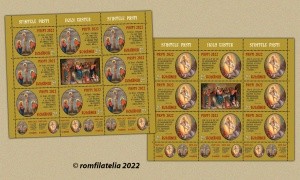 Around the most important event of Christendom, Romfilatelia introduces into circulation, on Tuesday, March, 22nd, this year, the postage stamps issue          Holy Easter 2022, which commemorates the turning points from the life of the Saviour Jesus Christ: The Entry into Jerusalem, The Crucifixion, The Resurrection and The Ascension.

This year, the icons illustrated within the postage stamps issue, were selected from the patrimony of the Kretzulescu Church in Bucharest, who celebrates 300 years since its construction.

Historical monument, landmark of the Victory Way in Bucharest, Kretzulescu Church has its founding year in 1718, when Iordache Kretzulescu and Safta Brancoveanu (daughter of the martyred voivode) returned from the exile in Constantinople.

The church, whose construction was completed in 1722, was consecrated on September 20th of the same year and placed under the protection of the Virgin Mary, in honour of the memory of Prince Constantin Brancoveanu executed, on the feast day of the Assumption. The foundation of the building is located on the site where there was an older wooden church, a place known under the name of those times as ‘La putul cu Zale (At the well with Chain mails)’.

The church fits perfectly into what we call a ‘Brancovenesc style’. In its pavilion there are several tombstones brought from the village of Cretulesti, where the founder’s family comes from. The nave of the church was also used as a necropolis for the family members. Painted in fresco, at the beginning of the 18th century by Romanian craftsmen, it partly followed the traditional-Byzantine typical, with the use of several harmonized western elements balanced with the iconographic program of Byzantium. The two founders, High Steward Iordache Kretzulescu and Safta Brancoveanu, were buried in the crypts of the Patriarchal Cathedral.

Between 1859 and 1860, after several damages caused by the earthquakes of 1815 and 1838, obvious changes were made. The Kretzulescu family entrusted the works to the Austrian architect Ludovic Lipizer, whose house, known as the House of Guilds, is located 10, Stelea Spatarul Street. He greatly modified the church, giving it a shape that visibly reflects a Western style. The interior columns were removed, the iconostasis was modified, and the fresco was replaced with oil painting, in a realistic style, by the painter Gheorghe Tattarescu.

Between 1933 and 1936, the Historical Monuments Commission entrusted the architect Stefan Bals with the restoration works. Exterior plastering was abandoned, considering that the church would look better with exposed brick facades. The Byzantine-style fresco was restored, removing the oil painting of Tattarescu, preserving only the portraits of the founders on the west wall of the church, the icons on the iconostasis and some of the icons of the holidays over the year.

Located in a space bordered by imposing buildings, such as the Royal Palace and the Grand Theatre, to which retail stores were added, the church in which Anton Pann’s men’s chorus sang, jangled the opulence of the neighbourhoods.

In the fall of 1938, the space around the church became vacant after the demolition of retail store buildings. In their place appears, among others, the building of Dacia Bookstore.

During the events of December 1989, bullets also hit the walls of the church. With the efforts and supervision of Father Vasile Raduca, all broken bricks were replaced, the roof was rebuilt, and the walls were reinforced by tie rods introduced into their structures.

The entire mural was restored by the team led by Romeo Andronic. It should be mentioned that, benefiting from the assistance of Princess Margareta of Romania, the Ministry of Culture financed the works of consolidation and restoration of interior painting.

The church’s patrimony includes several icons from the first half of the 17th century and a precious chandelier made of enamelled bronze in Paris in 1831.

For lovers of the places of Romanian spirituality, the Kretzulescu Church can be a starting point to visit the Stavropoleos Church and then Domnita Balasa Church, to find peace and quiet in front of the altars of the symbols of the ancestral faith.

The Resurrection of the Lord Jesus Christ is the greatest celebration of Christendom.

In the Sermon on the Mount, Jesus Christ utters the words full of meaning and wisdom in close connection with the thing we desire most, peace: ‘Blessed are the peacemakers, for they will be called children of God.’ (Matthew 5:9) The epiphany of our Lord in the midst of His disciples, after the Resurrection, is presented by the evangelist Luke: ‘While they were still talking about this, Jesus himself stood among them and said to them, “Peace be with you.”’ (Luke 24:36)

The state of peace and living in good understanding, perfectly defined by the word peace, is later found as a leitmotif in the Epistles of the Apostle Paul: ‘If it is possible, as far as it depends on you, live at peace with everyone’ (Romans 12:18), to which Paul adds: ‘Pursue peace with everyone, as well as holiness, without which no one will see the Lord’ (Hebrews 2:14).

‘Seeing the Lord’ is the gift given only to those who truly believe in the Lord’s Resurrection and who fully obey the command to live in peace and good understanding with all their fellow men.

The feast of Easter is a feast of joy and hope, the candles lit on the night of the Resurrection drive away darkness and fear, their light accompanies the optimism and emotion of the moment when the chests of millions of Christians resound: Christ is Risen!, to which clearly, a divine echo responds: Truly He is Risen!

The two postage stamps of the issue, along with a philatelic souvenir sheet, dedicated to this year’s Easter, present in their images a biblical story that is easy to decipher and especially easy to understand: The entry into Jerusalem (the stamp of the philatelic souvenir sheet) in which Jesus is hailed as a true King, for that after a few days to be judged and condemned to death by crucifixion, forsaken by his fellows and His disciples, becoming the divine symbol of the sacrifice for the salvation of people.

The culminating and final moment of the dramatic scene lived on the Stations of the Cross to the top of Golgotha, ​​is the miracle of the Resurrection when Jesus Rises from the tomb in the presence of the Roman guardsmen who, frightened, “pretended as dead” (Matthew 28:4). They were later paid, according to the biblical text, at the initiative of the Jewish bishops: ‘When the chief priests had met with the elders and devised a plan, they gave the soldiers a large sum of money, telling them, “You are to say, ‘His disciples came during the night and stole him away while we were asleep’” (Matthew 28:12, 13).

In the troubled times we have to face, let us not forget that the hope of the return of peace and tranquillity rises without denial, springing from the faith in salvation and Resurrection sealed with the greeting of the Christians of the world: ‘Christ is Risen! – Truly He is Risen!’

All images used to develop the postage stamps issue Holy Easter 2022 were made available by the servants of the Kretzulescu Church, for which Romfilatelia sends its best thanks.

Romfilatelia thanks His Beatitude Father Patriarch Daniel for the High Resolution, the blessing, as well as for the documentary support given to the development of this postage stamps issue by the designated representatives of the Romanian Orthodox Church. 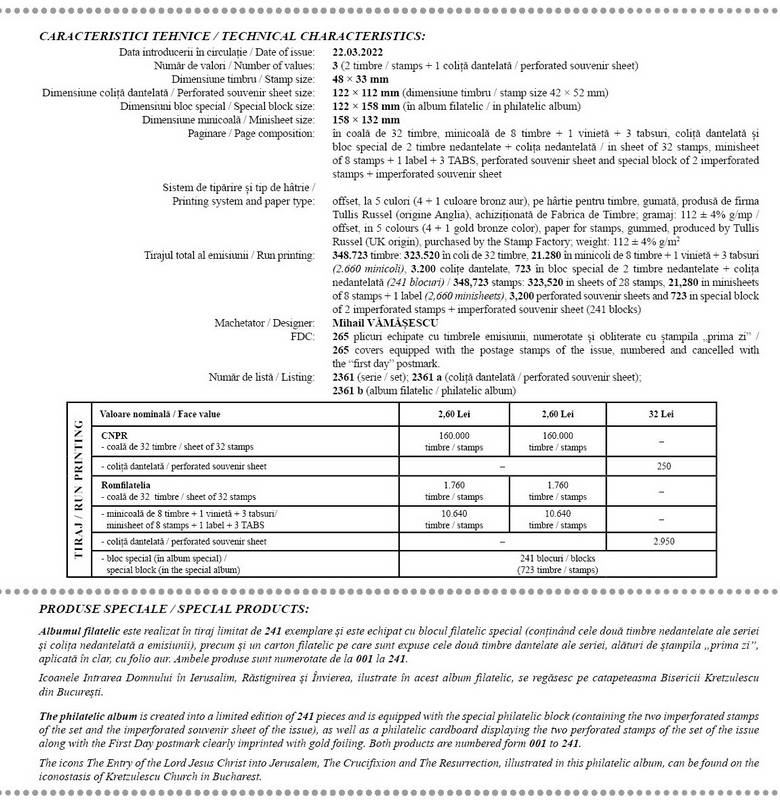