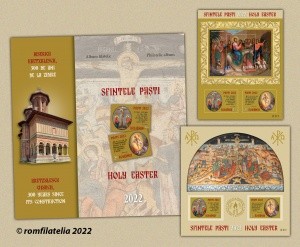 The icons The Entry of the Lord Jesus Christ into Jerusalem, The Crucifixion and The Resurrection, illustrated in this philatelic album, can be found on the iconostasis of Kretzulescu Church in Bucharest.