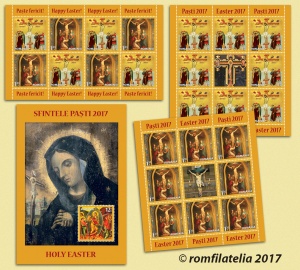 This year, because Easter is celebrated on the same day, both for Orthodox Christians and Catholics alike, Romfilatelia brings to the public’s attention a valuable postage stamp issue consisting of two stamps and a souvenir sheet.

On two stamps of the issue, two icons are illustrated, representing the Crucifixion of the Savior, belonging to the
“Radu Voda” Monastery, and to the “Saint Joseph” Cathedral, both in Bucharest.

The stamp illustrating the Crucifixion of Jesus Christ, from the “Radu Voda” Monastery heritage, is a representation known since the first Christian era. God could not give us a proof of greater love than the death of his Son, Jesus Christ, for our redemption. So, the sacrifice that would have been the way of perfecting humanity became after the Fall of Man our means of reconciliation with God. In July 1992, the Darvari Hermitage, was declared a historic monument by the National Commission of Monuments, Ensembles and Historical Sites. The Lord’s Crucifixion icon is in the “Saint Joseph” Cathedral, in Bucharest. Solemnity of “Saint Joseph, husband of the Holy Virgin Mary” was chosen as patron day of the cathedral and is celebrated every year on March19th.“Saint Joseph’s” Cathedral is the seat of the Archbishop Metropolitan of Bucharest, the living breath of the Catholic congregation in southern Romania, a historic, cultural and architectural monument enshrined in national and European heritage. On February 15th, 1884, the Pontifical Mass for the consecration and inauguration of “Saint Joseph’s” Cathedral was celebrated.  The Resurrection – the Harrowing of Hell is part of the Darvari Hermitage of Bucharest’s iconographic heritage. Full of symbols, the Harrowing of Hell icon of the Lord Jesus shows him making his way through the crust of the earth and trampling the gates of hell. The Harrowing of Hell bears in itself the beginning of human exaltation, for which physical death is only a passage, a gateway to new life, eternal. The Darvari Hermitage under the patronage of Saints Constantine and Helen and the Holy Archangels Michael and Gabriel was founded in 1834 by Mihail Darvari and his wife Elena, born in the Buzescu family. The icon of Our Lady of Sorrows – (souvenir sheet border) is part of the “Radu Voda” Monastery’s heritage under the Holy Trinity and Saint Nectarios of Aegina Hierarch patronage and is dated in the 19th century. The monastery was founded by Prince Mircea Alexandru II (1568-1577) and his lady, Ecaterina with the thought of it becoming the Metropolitan seat in the Capital.

Romfilatelia thanks the Romanian Patriarchy, the Roman Catholic Diocese of Bucharest, the “Radu Voda” Monastery and the Darvari Hermitage for their documentary support granted in the creation of this issue postage stamp issue. 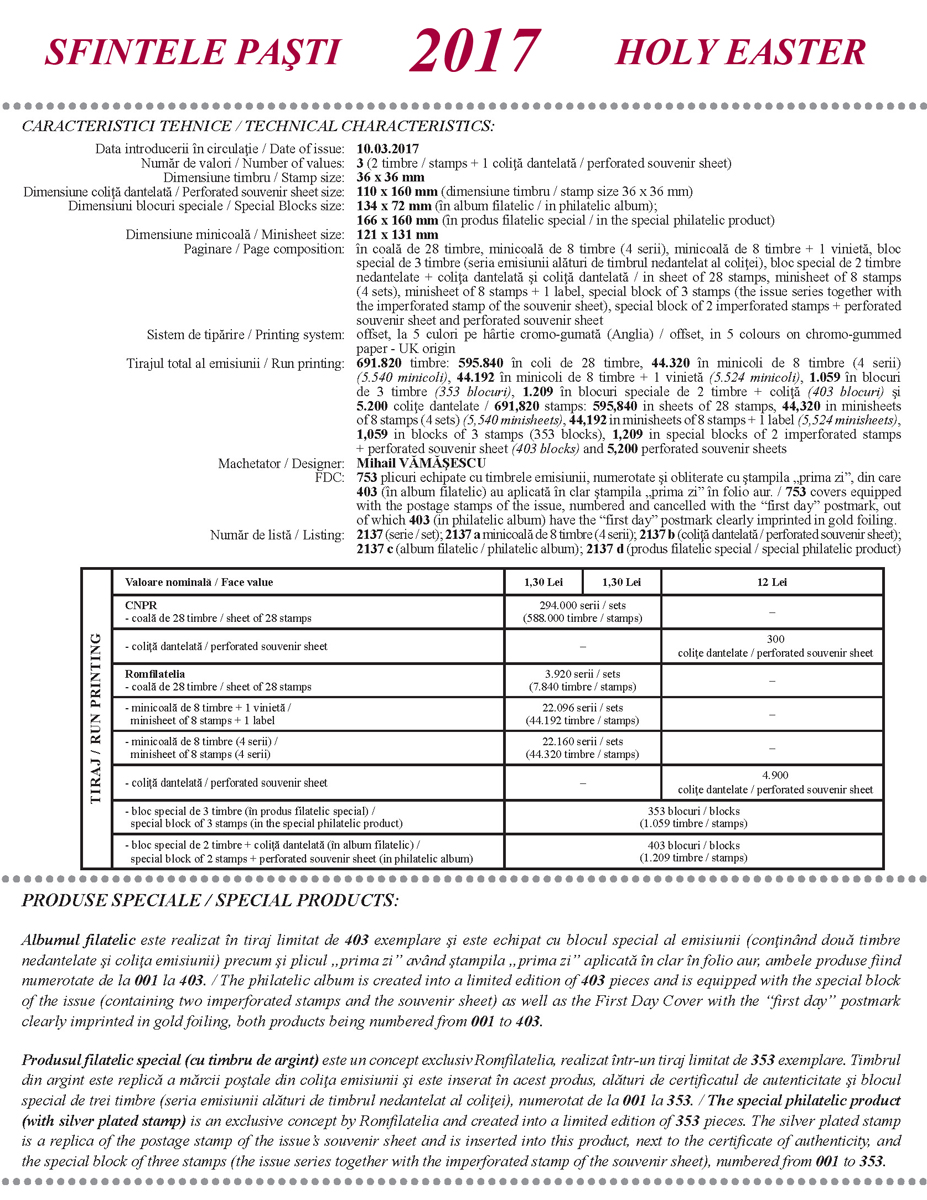