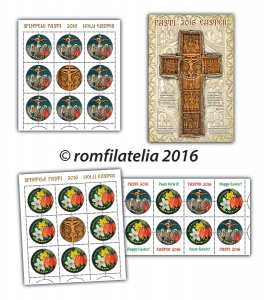 Easter, the Christian holiday that calls on people to take the Holy Light, brings the unique joy of the Resurrection, but also rituals and religious traditions, among which that of the salute known by even the youngest ones: Christ is risen! Truly He is risen!

To illustrate the stamp issue Holly Easter, from the Putna Monastery heritage were chosen representative cult objects: thematic icons, a wooden cross, clasps. Each of these objects bears in itself a historical and symbolic significance.

The Putna monastery has its beginning on July 10th, 1466, when St. Stephen the Great, Prince of Moldavia (1457-1504), laid the cornerstone of the church, in an area with the tradition of hermit living. After five and a half centuries of existence, the Putna Monastery is the guardian of an important treasure of liturgical objects that bear witness not only to the uninterrupted spiritual life in these places, but also to the richness and generosity of those who were honored over the centuries to be founders and benefactors of this heavenly abode.

The Crucifixion icon, from the royal church iconostasis, created during 1771-1773 at the command of Metropolitan Iacov of Moldavia illustrated the stamp with the face value of lei 1,00.

The iconostasis is a wall that separates the altar from the nave. It envisions “the border between the seen and unseen world” and shows the icons, specifically the work of the priest during Mass, and generally the work of divine salvation of mankind. Icons, with the theme that God became seen through the Incarnation, reproduce the preaching of the Gospel in images and indicate that the target that every man and all of creation must reach.

On the command of Metropolitan Iacov Putneanul (1719 – 1778), in the princely church, a new iconostasis was finished in 1773, designed according to the “fashion” of the era, Baroque and Rococo, carved from linden wood in high relief, painted in tempera and gilded with gold leaf. With a width of 7.40 meters and a height of almost 10 meters, Putna’s iconostasis is the largest of Moldavian iconostasis of the time.

According to documents discovered, most of the icons were painted by Gheorghe Zugravul in 1771. The painter is proving an important representative of the Moldavian school in the 18th century, through the local folk elements that he intertwined in the most realistic stylistic approach of the icon art.

Through the illustration of the stamp with the face value of lei 1,00 we invite you to a look at the national folklore and the flowers that gladden all eyes, opening their petals close to Holly Easter – Easter Flowers (Anemone nemorosa, Anemone ranunculoides, Fritillaria imperialis).

There are Romanian folklore legends on how these flowers arose- whether they arose from the tears the Virgin Mary shed at the feet of her crucified Son or that the flower did not believe in Jesus, and when He rose the flower bowed its head in shame.

The clasp of the Four Gospels written by the monk Paladie and given by Stephen the Great in 1489 and a handheld cross, hand carved and locked, given by Bishop Sava to the Sinesti hermitage in 1698, together illustrate the souvenir sheet of the issue. 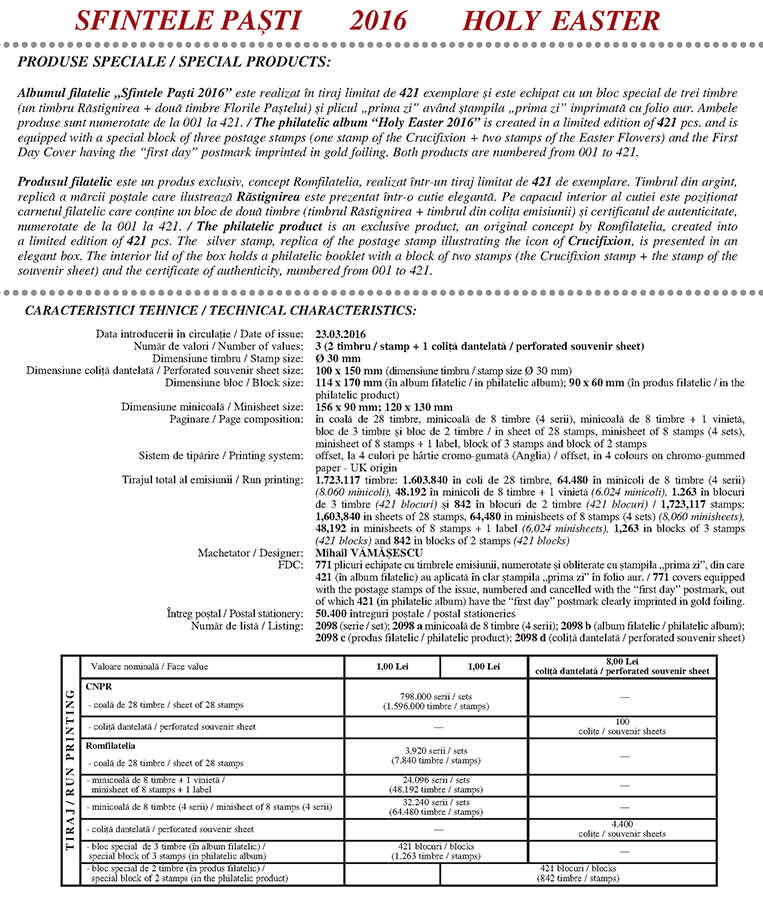