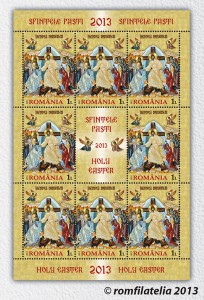 On the occasion of the Easter feast, Romfilatelia introduces into circulation a postage stamps issue dedicated to this event: Holy Easter 2013.

A fundamental Christian feast, the Easter was celebrated first by the Jews that were under the Egyptian reign in the time of Moses. Before the Angel sent by God should kill the Egyptian firstborn infants, the Jews received the following command: Draw out and take you a lamb according to your families, and kill the passover. And ye shall take a bunch of hyssop, and dip it in the blood that is in the bason, and strike the lintel and the two side posts with the blood that is in the bason; and none of you shall go out at the door of his house until the morning. For the Lord will pass through to smite the Egyptians; and when he seeth the blood upon the lintel, and on the two side posts, the Lord will pass over the door, and will not suffer the destroyer to come in unto your houses to smite you. And ye shall observe this thing for an ordinance to thee and to thy sons for ever. And it shall come to pass, when ye be come to the land which the Lord will give you, according as he hath promised, that ye shall keep this service. (Exodus 12, 21-25)

The Easter feast recorded in Nisan month (the first month of the Hebrew year) is presented by Moses as follows: And the Lord spake unto Moses in the wilderness of Sinai, in the first month of the second year after they were come out of the land of Egypt, saying: Let the children of Israel also keep the passover at his appointed season. In the fourteenth day of this month, at even, ye shall keep it in his appointed season: according to all the rites of it, and according to all the ceremonies thereof, shall ye keep it. (Numbers 9,1-3)

The Hebrew calendar drawn up according to the moon phases, records the date of the Easter feast on the first full moon night after the spring equinox. For this reason, the holiday does not have a fixed date as does the one celebrating Our Lord’s Birth.

The New Testament, in the Gospel of Luke, tells us that in His childhood, Christ used to attend the Easter feast: Now his parents went to Jerusalem every year at the feast of the passover. And when he was twelve years old, they went up to Jerusalem after the custom of the feast. (Luke 2, 41-42)

The sentence to death by crucifixion of our world’s Savior, Jesus Christ, represents for Christians a new beginning: the celebration of Christ’s sacrifice (a symbol of lamb’s sacrifice) followed by the great feast of the Resurrection. By His death and sacrifice, Christ offers people a highly valuable gift: the appurtenance to Our Lord’s people legitimated not by the statute of Abraham’s follower but by a single belief, the belief in Jesus Christ, the most beloved Son of God Almighty and the kind Mediator between God and the mankind.

The image of the postage stamp reproduces the scene of Christ’s Resurrection existing on a celebrating icon from the Patriarchal Cathedral heritage, where are kept in high honour the relics of Saint Dimitrios the New, the spiritual protector of the Cathedral and Bucharest city.

On the occasion of Holy Easter 2013, Romfilatelia is sending the greeting that Jesus Christ risen from the dead brings trust, light, love and hope into everyone’s soul.

We address our thanks to His Beatitude Father Daniel, Archbishop of Bucharest, Metropolitan of Muntenia and Dobrogea, Locum Tenens of the Throne of Caesarea Cappadociae and Patriarch of the Romanian Orthodox Church, and to the Archbishopric of Bucharest for their support granted in the accomplishment of this postage stamps issue.
Issue date: 2013-04-05 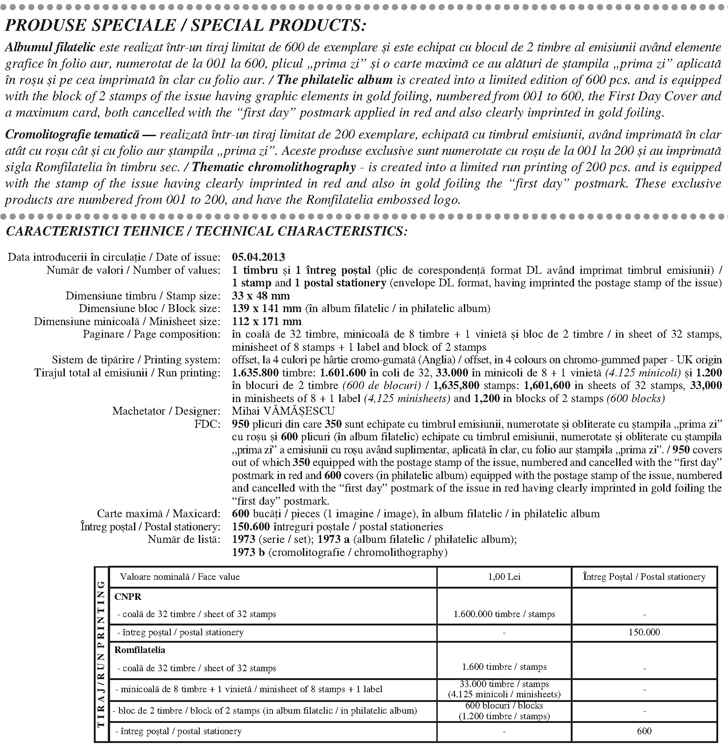