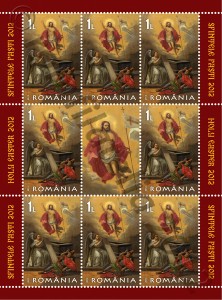 On the occasion of Easter holidays, Romfilatelia introduces into circulation the postage stamps issue HOLY EASTER 2012.

The Resurrection of our Lord, this miracle that has been in the Christian mind for two millennia, has always made people become better to be able to properly receive the Light of Christ´s Resurrection.

The postage stamp of this issue illustrates the icon The Resurrection of Christ, made in 1876, which can be found in the patrimony of Saint Pantelimon Church inBucharest.

260 years ago, the ancient wooden church that laid on the location of the current Saint Pantelimon Church was mentioned for the first time in the testament of the ruler Grigore Ghica.

In 1790, Ioan de la Silvestru built a new holy place on the location of the former church; he painted the icon of Virgin Mary and of Jesus Christ. The builder of the holy place also painted the outline of the church on a wooden box containing 11 small icons depicting several holidays.

Seriously damaged by the earthquake in 1838, almost three decades later, the decision to build the church in its current form was taken.

The foundation stone of the current church is laid in 1872; the church was built according to the blueprints of the Architect Nae Cucu and it was painted by G. Stoenescu, a student of Gh. Tattarescu.

In 1876 the church was finished in the current shape of a cross, having two wooden steeples, the front one being the bell tower.

Both, the earthquakes from 1940 and that one from 1977 damaged the church to such an extent that its consolidation was needed. This work was finished in 1979 and the initial appearance, both inside and outside, was preserved.

Since 2008 the church shelters the relics of Saint Great Martyr and Healer Pantelimon, the patron of physicians and guardian of the ill. A reliquary of great value from the church patrimony preserves the robe of Pious Saint Parascheva.

On the 9th of January 2012, one of the church steeples was engulfed by a devastating fire and it is considered to be a miracle the fact that both the iconostasis, located under the steeple, and the wooden cross that fell and was recovered from the scrap of the steeple fallen inside the church, were not damaged by the fire and by the water used for extinguishing the fire.

The church was rebuilt in only one week and so that, on the 15th of January 2012 it was re-sanctified by His Beatitude Father Daniel, the Patriarch of the Romanian Orthodox Church, who performed the service together with a synod of priests.

We would like to thank His Beatitude Father Daniel, the Patriarch of the Romanian Orthodox Church, to the Archiepiscopate of Bucharest and to the Saint Pantelimon Parish – Foisorul de Foc for the support granted in the accomplishment of this postage stamps issue.
Issue date: 2012-03-16 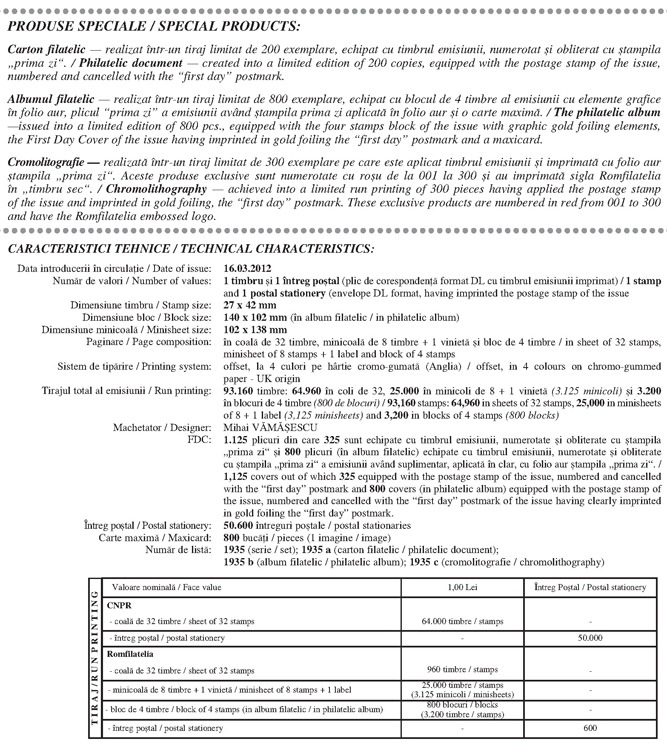