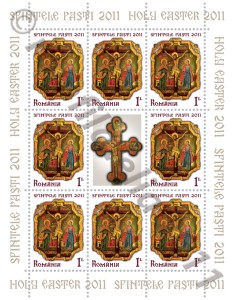 The postage stamp of this issue reproduces the scene of Jesus’ Crucifixion found on an “icon of feasts” from the 18th century that belonged to the church from Oravita (Caras-Severin) and which is exhibited today in the Museum of old religious art from the basement of the Metropolitan Cathedral of Timisoara. The priceless collection contains about 800 icons and paintings, 130 church objects as well as manuscripts of the “Noul Testament de la Balgrad (New Testament from Belgrade)” (1648) and the “Cazania lui Varlaam (The Homiliary of Metropolitan Varlaam)” (1643).

Symbol of the town lying on Bega River, the Metropolitan Cathedral dedicated to “The Three Holly Hierarchs” and “Saint Joseph the New of Partos” was built between 1936 and 1940, based on the plans of the architect Ion Traianescu. For its architecture, paintings and sculpture, the building is considered to be an art monument.

The architecture of the cathedral in Timisoara is a synthesis of the Romanian religious style and the Byzantine-Moldavian one. Due to its sizes, the cathedral may shelter up to 5,000 believers. Its foundation was built on a huge concrete plate sustained by more than 1,000 reinforced-concrete posts fastened in up to 20 m in depth.

The 63 m long and 32 m wide construction has 11 bell towers out of which the main tower measures 83.7 meters.

The seven bells, each weighting 8 tones, were harmoniously arranged by the composer Sabin Dragoi.

On October 6th 1946, the cathedral was consecrated in the presence of the King Michael I of Romania, the Patriarch Nicodim Munteanu of Romania, the entire episcopate of the Metropolitan Church of Ardeal and Church’s representatives from all corners of the country.

Ten more years would elapse until its interior and exterior paintings were finished. Their author was Anastasie Demian. The iconostasis impresses through its size (135 m²) and the ornamentation in Brancoveanu style.

In 1956 they brought into the cathedral the relics of Saint Joseph the New of Partos, former metropolitan bishop of Banat in the 17th century.

At the same time, the paints of the cathedral were restored between 2003 and 2006.

It is time to be together on the Holy Easter!
Be that Jesus’ blessing fall upon us and make us better, more generous, wiser and bring the light in our soul!

We warmly thank His Holiness dr. Nicolae Corneanu, the Archbishop of Timisoara and the Metropolitan Bishop of Banat and the team of the Diocesan Center for their invaluable kindness and total support given in the accomplishment of this postage stamps issue. 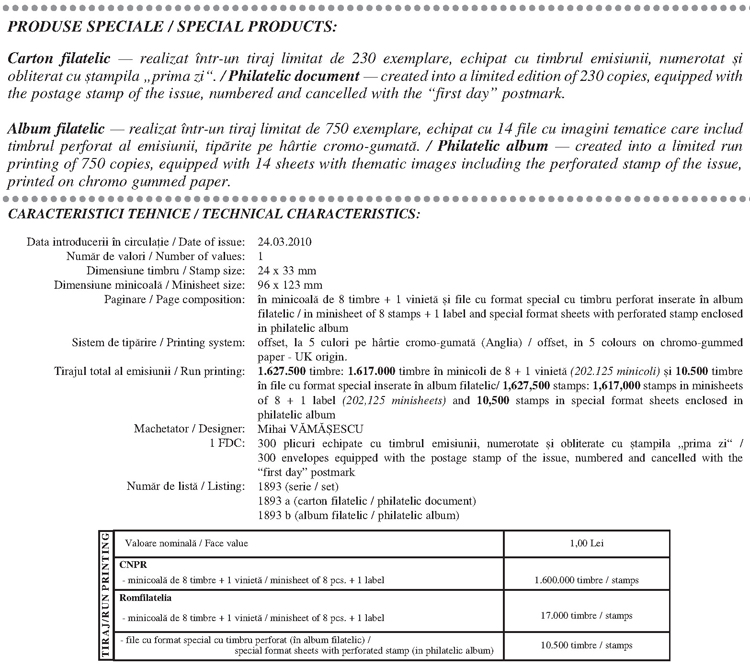