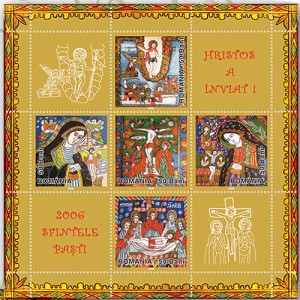 On the occasion of the Easter Holidays, Romfilatelia, the specialized company in editing and trading Romanian postage stamps, introduces into the postal network the postage stamps issue HOLY EASTER.
This year, the Day of the Saint Great Martyr George, the Victory Carrier, is celebrated on the same day as the Holy Easter.
The Easter is the celebration of the Resurrection of Jesus Christ, the founder of the Christian religion, born in Bethlehem by Virgin Mary. Baptized by John and introduced as Messiah, Christ chose 12 apprentices and, for three years, he preached his precepts in Galilee and Judea. Then he returned to Jerusalem and, after Judas&#8217;s treason, he is judged and condemned to death for the &#8220;blasphemy&#8221; of calling himself the Son of God. He was crucified on Golgotha, between two rogues, after carrying his own cross on his back. Brought down from the cross and then buried, Jesus Christ rose from the dead after three days and ascended to the sky after 40 days.
One of the most significant Easter symbols are the red eggs, whose color symbolize the blood of Jesus that trickled down on the cross to redeem the humanity. They say that when Christ was crucified, Virgin Mary had placed a basket with eggs under his cross in order to soften the hearts of the soldiers who guarded him, and these eggs became red because of the Saviour&#8217;s blood.
According to the tradition, in the Christian families they eat lamb meat during the Easter days. The lamb symbolizes Jesus Christ himself, who had sacrificed himself for the world&#8217;s sins and died on the cross like an innocent lamb.
The wonderful icons on glass shown on the postage stamps of this issue originate from Þara Bârsei, Fãgãraº and Sibiu, and they are designed by icon painters during the 19th century, being part of the centenary collection of the Romanian Peasant Museum.
May the Holy Easter Days bring you clearer thoughts, light in your soul and hope for a better future!
Christ was resurrected!
Romfilatelia Team 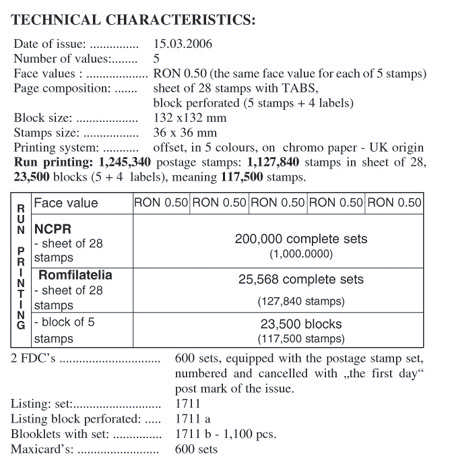