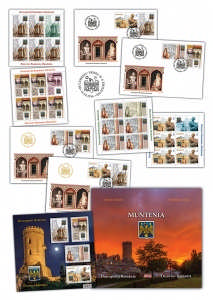 South of the Carpathians, between Olt and Danube rivers, lies Greater Wallachia, a historical region of Romania, known also as Muntenia, which together with Oltenia (Lesser Wallachia), forms Wallachia. The birth of the Romanian province is believed to be the battle of Posada in 1330, when Wallachians, led by Prince Basarab I, were victorious against the army of the Hungarian king, Charles Robert.

The nearly seven centuries of history meant many acts of bravery and sacrifice, to which the beauty and joy of living in these places are added, being expressed and transmitted from generation to generation by valuable architectural and spiritual structures, but also by exceptional people of the area.

The legacy they left overcame time, keeping the region’s uniqueness and specificity up today, for anyone willing to visit this area full of history, culture and traditions. Thus, we invite you to join us on a journey back in time, from where we’ll bring glimpses of the area’s history, through the latest philatelic project Discover Romania, Muntenia.

In the four collection stamps the issue brings together historic treasures and representatives personalities of the area, being available starting with Friday, October 14th, 2016, in Romfilatelia’s shops from Bucharest, Bacau, Brasov, Cluj-Napoca, Iasi and Timisoara.

The postage stamp with the face value of lei 2.50 highlights in a suggestive association the majestic silhouette of Curtea de Arges Monastery and its founder, Neagoe Basarab. Starting with the first couple of Romania’s King and Queen, Carol I and Elizabeth, and up to the present, the imposing monastery building watches over the royal family crypts.

The face value of lei 3.50 belongs to the stamp reminiscent of ruler Constantin Brancoveanu and the Brancovenesc style ornaments present in his foundations. At his initiative, the best builders and decorators pooled their talents to define and materialize a renowned art style, Brancovenesc style, a wisely coagulated whole of several styles.

The stamp with the face value of lei 8 brings together, in a defining composition, the beauty of Muntenia’s folk costumes, carpets and decorative motifs, along with stone decorations of monastery buildings, valuable presences of the country’s history.

On the postage stamp with the face value of lei 15 can be found the capital of the country, Bucharest city, in a set of images representative for spirituality and culture – the Romanian Athenaeum, to which is added the statue of the great politician Ion I.C. Bratianu.

The illustration of the four postage stamps is completed by region’s heraldry (Muntenia’s coat of arms), and the two first day covers of the issue refer to the illustration of architectural details specific to Stavropoleos Monastery in Bucharest and to the traditional woman folk costumes of Muntenia.

As page composition were used the sheet of 32 stamps, the minisheet of 5 stamps + 1 label and the block of 4 stamps (in philatelic album), whose margin illustrate the Chindiei Tower, within the Curtea Domneasca National Museum Complex of Targoviste, in a nocturnal frame.

The special product of the issue is the philatelic album, created into a limited edition of 245 pcs. and equipped with the block of 4 postage stamps of the issue and the set of two first day covers having the “first day” postmark clearly imprinted in gold foiling. Each element is numbered from 001 to 245.

Romfilatelia thanks the “Curtea Domneasca” National Museum Complex Targoviste and photographer Valentin Grigore for their support in achieving this postage stamp issue.