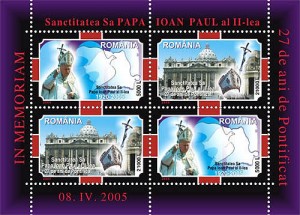 April, 2nd 2005, a day which will always be present in the Christians souls from the entire world as the turning up of a new Saint  John Paul the 2nd. He went to ones last resting place, being taken by God, the Shepherd of billions of people. The Pope John Paul the 2nd wasnt only a spiritual leader, but also a skilful political man, to whom all people from Eastern Europe must show gratitude for his determinative role in the falling of the Steel Curtain between the East and West part of Europe.